Police Officer Crashes on Motorcycle while on Duty

A California Highway Patrol officer suffered major injuries in a crash that shut down a busy North County freeway for at least four hours Tuesday. The motorcycle officer rear ended a SUV in eastbound lanes of State Route 78 near Interstate 15 around 9 a.m. The officer, was transported to Palomar Medical Center with moderate to severe non-life threatening injuries and underwent surgery. When the officer rear-ended a Chevrolet Traverse he was ejected from his motorcycle toward the center divider. As the motorcycle slid in the lanes it was struck by a blue Subaru. The drivers of the Chevrolet and the Subaru remained at the scene. A nurse driving by also stopped at the scene and assisted the officer. The investigation shut down three lanes of traffic for several hours. A Sig Alert was issued at about 9:15 a.m. and CHP reopened lanes at about 2:15 p.m. The closure created slowdown on a major freeway interchange during morning commuting hours.

The San Diego County Motorcycle Accident Lawyers at RiderzLaw want to wish this police officer a speedy recovery. As always we urge every single motorcycle rider out there to ride within your limits and always be 100% focused on the road and what is ahead of you. 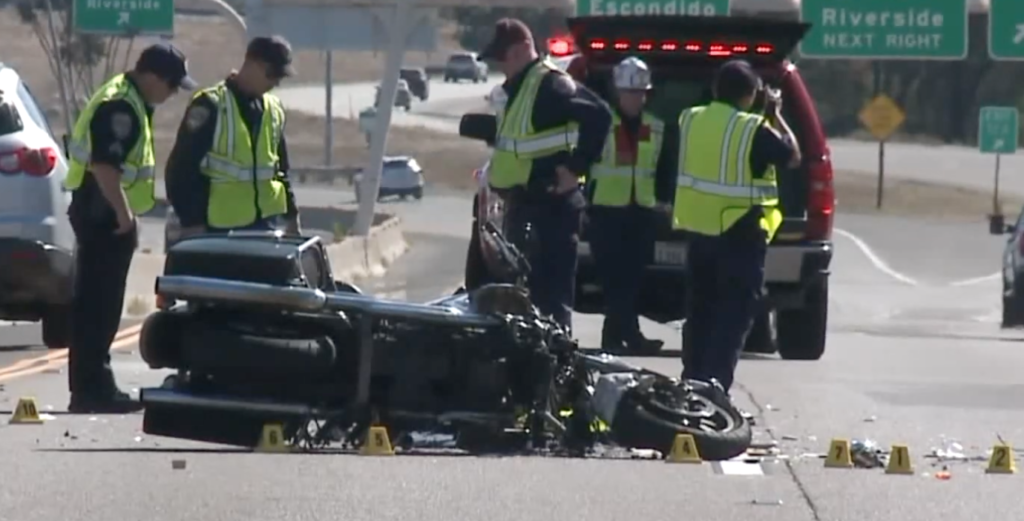