Kris Turner has turned a lot of laps around Barber Motorsports Park and felt good about his chances at a podium coming into the last MotoAmerica round of the 2019 season. The weekend started off slowly in the first practice session coming in p12 and 2.7 seconds off after going out on really old tires. With the new pavement at Barber, Dunlop required harder compound tires which meant either buying an extra set of tires just for first practice, or fitting on used tires that were dug out of a pile at the Turner’s Cycle race shop back home. The team decided to go with the latter and Turner came in complaining about a serious lack of rear grip. 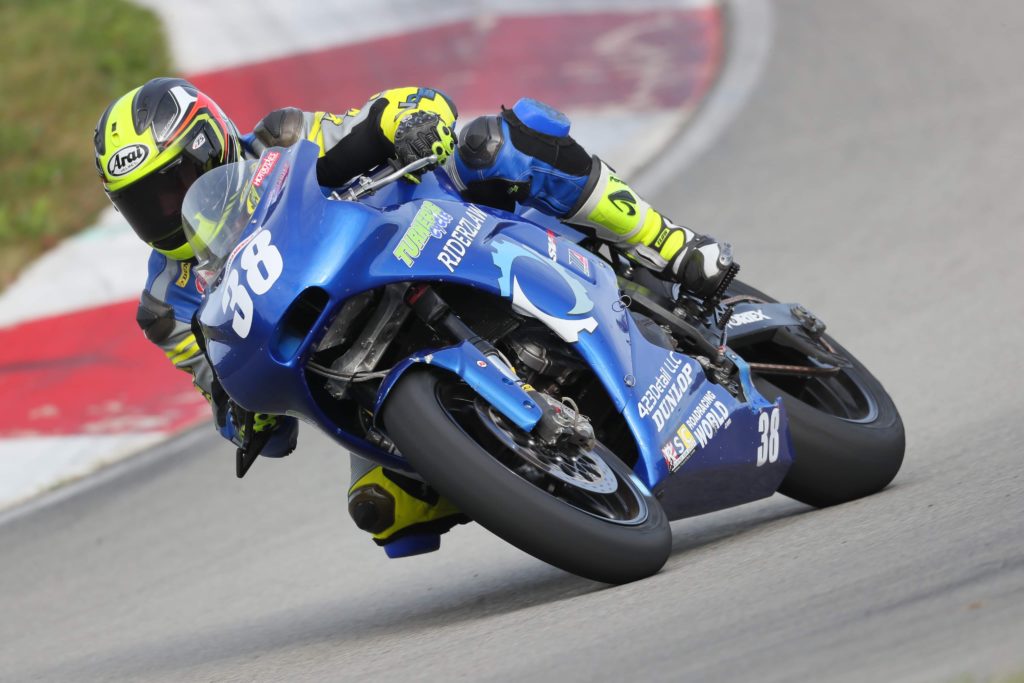 Practice 2 came together a little better though, dropping over 4 seconds after cleaning the tire and putting another heat cycle on it, it began gripping. Turner came out of practice 2 in p2, two tenths of a second off of the leader and a whole second under the track record for lightweight twins.

Getting more comfortable, Turner dropped another three tenths for the first qualifying session of the weekend and finished the session 4th quickest. Turner went to work after the session was over and really put a lot of thought into where he could improve.

Remarks from Turner on the first two days on the new surface, “The track isn’t bad but it’s very unpredictable. It has a ton of grip which is good but it is vague. It is fun though, we are able to carry a lot more mid corner speed than ever in some spots and I am going to go back to the drawing board and see if I can’t put the RiderzLaw Racing Suzuki on the front row in Q2 in the morning.”

Turner spent most of the Q2 session trying to get a clean lap to set a good time. After one pit stop, run ins with other riders and a deer running across the track, Turner finally put it all together with just a few minutes left and grabbed pole with a new track record of 1:31.613, two full seconds under the old track record.

Feeling excited and confident, Turner pit his head down for the race.

“I got a good start and felt like me and Dumas could possibly break away eventually. I knew I had pace in Dumas and was comfortable following him until it was time to make the move. The red flag came out just two laps in and I think that hurt us a little. I came off the track still riding at a good pace trying to not let the tires cool down because we went with the softer option front tire and I was afraid it would tear. On the restart I broke out 2nd again after wrestling with Barnes for the spot entering turn one. I got caught in a battle with Dumas and Parrish and even put a really cool pass on both of them in the last couple turns one lap.”

But it didn’t quite come together as planned. Turner missed a shift coming into the front straight for the white flag lap and just barely lost touch with the two leaders and lost a spot to Barnes. He put his head down though and did all he could on that last lap and came up short. The front tire started tearing and Turner tucked the front trying to make a move on Barnes for a podium spot in the next to last turn. Turner saved it, gathered it back up and came in for a 4th place finish.

“I had a good weekend and I’m happy with how it went. Yeah, I wish I would have been on the podium that eluded me all year but I still put in some good riding this weekend and this year and I’m happy with a lot of things going into the off season. I need to find some more help for next season because the plan is to get back on a 600 and put in a legitimate run for the Supersport championship in 2020. I gotta give a big shot out and thank you to RiderzLaw for all of their help this year. They made it possible to go racing at times when I didn’t think I was going to make the next round. Those guys really took care of me when I needed it and I really appreciate every one over there. Also, thank you to everyone else who helped me this year. The 2020 season starts now”