After watching motorcyclists running into stuff, falling over, failing spectacularly at popping wheelies, etc, I realized a few things that many of these fails have in common:

One video depicted a new motorcycle owner nearly drop his bike as he wobbled around the curve while staring at his fender. As if the wobbling weren’t nerve- racking enough, he almost ran right into an oncoming car.

You might spot some interesting stuff by staring at the road, but here’s what you won’t see: slow or stopped vehicles, debris, or anything else dangerous coming up in front of you. You won’t even see large items like couches or boats or mattresses.  If you don’t see them in time, you can’t stop for them!

Running into slow moving or stopped obstacles is far too common on a motorcycle. Keep it in mind on the road. If you don’t, you might come back as a bulldog. You know why bulldogs have flat noses, right?  It’s from chasing parked cars.

Below are a few tips for being safer on the road.

Here is the hard and harsh truth about riding at night on your motorcycle: the motorways are reduced to a sea of headlight and taillights. This is bad news to us motorcyclists. 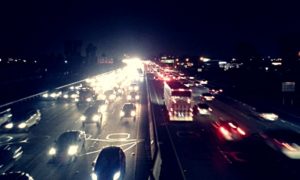 The real difference in riding disciplines between riding in the day and riding in the night can be summed up as follows: During the day we should ride like we are invisible; At night, we are invisible. Defensive riding; always required if you want to stay safe, becomes even more critical.

Most motorcyclists who wear reflective gear and have properly functioning taillight/brake light and turn signals are still somewhat visible to the motorists behind us, but not to the motorists ahead of us.  All they can see in their rearview mirrors is the projection of our headlamps. To those sneaking glances back at us occasionally, all the colors or reflectors of our motorcycle gear or the shape of our motorcycles and ourselves are reduced to at most a backlit silhouette, or in the worst case just one diffused light. 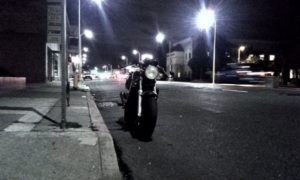 As often as practical, move away from main motorways. Instead consider taking the longer routes through cities and towns, where the lack of motorists that go through the very same streets only to highlight you and your motorcycle. When there’s little to no other traffic, the likelihood of your motorcycle disappearing entirely from another motorists fleeting attention is lessened.

Riding in the Rain

Many drivers don’t know how to drive in the rain. When rain causes oil and dirt to rise up and make roads slick, they are not easy to navigate. All this causes potential disasters for motorcycle riders. However, many of us love riding our motorcycles all the time, and we aren’t going to let a little water bring us down. Here are a few ways to prepare to ride in the rain.

When it rains, most people are going to make mistakes, drive slower (hopefully!) and other challenges such as accident slowdowns are much more likely. To combat this, allot extra time for the morning commute by leaving a few minutes early. That way, there won’t be added stress every time an SUV slows down for no good reason. As a side benefit, the additional allotted commute time will dis-incentivize trying to do anything crazy like speeding up to make up lost time.

Anyone who rides in California for long enough becomes a huge fan of lane splitting. Don’t do it while riding in the rain. While it’s fun and time saving to lane split on a dry day, the possibility of an accident increases exponentially on a wet day. One false move by the rider or another driver will result in a nasty fall. If you leave early for work, you won’t cave in to the temptation to split lanes.

Without a doubt, when you are riding on a motorcycle, you can’t follow closely. This is especially true when you ride in the rain. At the sight of rain, many drivers will overuse their brakes, potentially causing them to spin suddenly out of control.

Leave extra room between you and whoever is in front of you. Wet streets mean longer braking distances, and you’ll also need to modify your braking technique.

Use both brakes in wet conditions, but use less pressure on the front brake than you usually do under dry conditions. Rely more on your rear brake. Sliding with the front wheel usually means wiping out, but sliding with the rear wheel is typically correctable.

Don’t slam down on your brakes; it’s never a great idea to stop short, but in wet conditions, that’s much more dangerous. Smooth, controlled movements and easing into a stop keep you from locking up the front wheel when the tires and roads are wet. Gripping that front brake too hard on a wet road means hitting the pavement and maybe even a trip to the emergency room.

When the water starts falling, pull out the armored rain gear and put it on.

You should aim for fabric that is waterproof, yet breathable. Choosing high visibility clothing is important all the time, but especially when it’s raining. Rainy weather often decreases visibility, making it even harder for car drivers to see you.

Keep your face covered, ideally with a full face helmet, because speeds above 30 mph in the rain cause those droplets to hurt your face. Use Rain-X or something similar on your visor to improve your visibility.  Before every rain ride, check your helmet for leaks.

You should already be braking more cautiously, but when it comes to cornering, give yourself more distance so you have a chance to slow down. Brake well before you go into the corners and turn deliberately. Remember, all of that traction that keeps you going on dry land is diminished in the rain, so don’t ride aggressively.

Yeah, always watch the road, but pay extra attention to a rain-soaked road. Painted lines can freeze easily and can be even more slick than the normal road surface when wet.  Manhole covers are a hazard. Avoid puddles if at all possible to do safely, because you just can’t tell in advance how deep they are. When you see rainbows in the roadway, realize they’re oil on the road and you need to avoid those areas. Roads are slickest within the first hour or two of rain since that’s when the water mixes with all of the oil on the road. If you can, wait for a few hours for the road to wash off before you go. Clean roads have much more rain traction than oily roads.

Inspect the bike thoroughly. First, and most importantly, check the tires and ensure they are not bald. If the tires have little or no tread, don’t take a chance. Good tread is essential to rain traction on your motorcycle.

If they’re too worn or improperly inflated, you can end your ride fast and instead find yourself in an ambulance on the way to the hospital. Big, fat rear tires tend to hydroplane; if you start to fishtail, stay calm and don’t make any sudden moves with your direction or braking. Instead, calmly ride it out as you back off the throttle. If your tail goes sideways while using rear braking, try to ride it out- if you let off while its sideways, it may buck you. Learn from it and back off the rear brake if necessary.

If you keep calm and relaxed, you probably won’t have any trouble on a rainy road. Just keep these safety tips for riding in the rain in mind. And remember, if there is lighting, flash flooding, or a serious storm, you should not be riding.

The main reason not to have music while riding (especially in the rain) is that hearing is so important a part of a motorcyclist’s overall situational awareness. A car might move into the blind spot next to you.  If the music is blaring, the likelihood of realizing the car is there decreases dramatically.

If you’ve ridden your motorcycle on just about any road in the United States, we should not have to convince you that there are plenty of terrible drivers out there. Half the people driving lately seem to be more focused on texting than they are on driving.

Dangers are out there. We see them here every day. Stay alert. Expect cagers (anyone in a car, truck, or any other enclosed vehicle) to cut you off, turn left in front of you, run stop signs, and of course, not look at their blind spot before changing lanes. What can you do about it? Stay out of cars’ blind spots. Approach intersections with caution. And if you’ll pardon the cliché, expect the unexpected. Eventually, after you’ve been riding long enough, you really will start to see a lot of those “unexpected” things before they happen. You’ll develop a kind of “Spidey-sense.” But this takes years of riding, and there is no shortcut. So stay safe and (we’ll say it one more time) stay alert!

If you are an off-road rider or go trekking on trails in the woods, you should be careful when you hit the trails. The AMA (American Motorcycle Association) has warned riders in three states that booby traps have been placed along trails which have endangered motorcyclists, cyclists, hikers, and horse riders. In New Hampshire, Idaho, and Massachusetts, riders have discovered booby traps, and there are likely more in other states.

A motorcyclist who runs into a trap can end up in the hospital or even die if they are going fast enough. This is no laughing matter- one tumble deep in the backcountry can be disastrous. If you are a rider or just someone out on a hike, you should report anything suspicious you find immediately by calling local law enforcement.

In Massachusetts, according to the Massachusetts Environmental Police and the State Department of Conservation, off-highway riders found cables strung across trails in four state parks, which would obviously endanger a rider on a motorized bike or mountain bike. Meanwhile, In rural Custer County, Idaho, motorcycle riders encountered barbed wire strung across a trail, about four feet from the ground. It was discovered before anyone crashed, which is the only fortunate thing to come out of this event. Less serious, but still scary, near Warren, New Hampshire, members of the Mount Moosilauke ATC Club found boards full of nails placed throughout the multi-use trail system. Luckily, nobody was injured, and the club members took out the boards, scattered nails, and fragments of broken glass.

While the AMA has specific information and alerts in these three areas, it does not mean that a rider or anyone else who enjoys trekking into nature elsewhere should have a false sense of security, as this surely happens in other states. 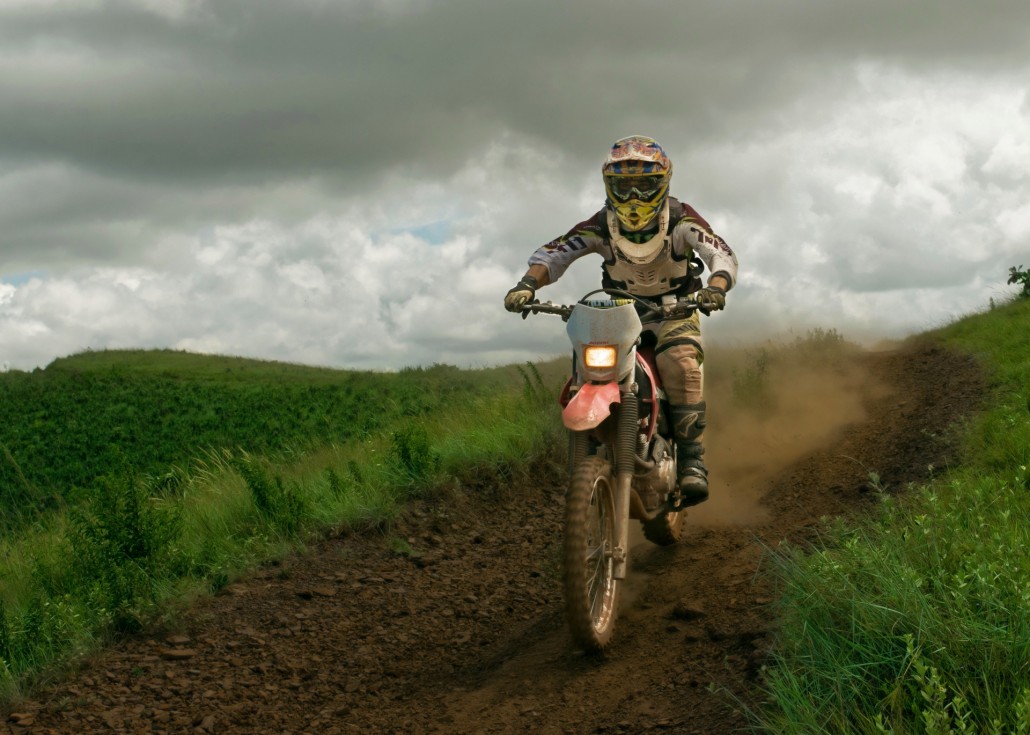 If you ride off-road, or if you enjoy going hiking in the woods, you should always be vigilant. To avoid any problems, riders should always be on the lookout for anything out of order, and if you are riding in a new area, ask around and consult online message boards or even contact local associations. If you encounter anything suspicious, don’t be afraid to report it to the park ranger or local police. 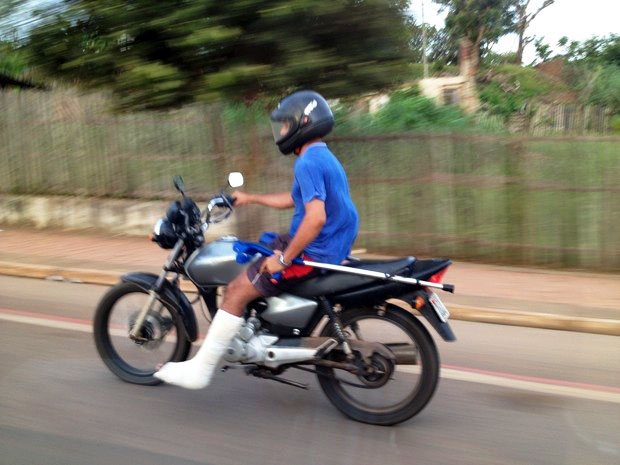 Each time I’m injured, it takes me longer to prepare for my rides. It also makes me more cautious while on the road and results in me avoiding leisurely stops. My main objective is to minimize the risks I take while on my motorcycle.

Riding a motorcycle is a very physical activity, and riding while in pain takes a toll. Give yourself plenty of time for your commutes. Don’t rush yourself; You are already compensating for the injuries you have. Also, if you don’t have to, don’t ride. It’s a drag not being able to ride, but rest is essential for injuries.

Stay safe on the streets!