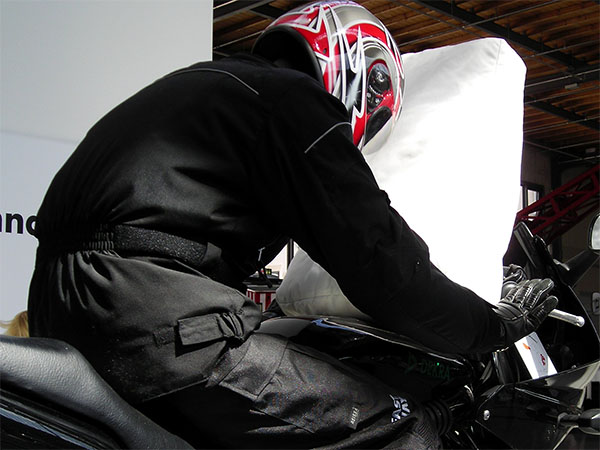 In the 1990s, I had a subscription to Highway Patrol Magazine. It covers a lot on new laws, fun facts, safety tips, and pictures.

Lots and lots of pictures. Enough to convince you to wear a seat belt in a car kind of pictures, if you get my meaning. Gory, ugly, hideous pictures of how fragile the human body can be when confronted with tons of steel and velocity.

Here’s what I took away from it. Always wear your seat belt! Seriously, a safety glass facial ain’t all that it’s cracked up to be. Or maybe it is….

Despite the logic behind this issue, there are still people asking why bikes don’t come with seatbelts. These are people who have never dropped a bike at speed, or had one dig in a peg and tumble off the road. Can you imagine being strapped to a tumbling bike? Sounds like a bad idea, yeah?

Many problems with safety are addressed by officials and legislators who have no clue about motorcycling, and their work reflects that.

For a while in the 90s, there was actually a push from some long-forgotten genius who wanted to make seatbelts mandatory on motorcycles. Battling with fact and logic, organized groups smacked that idea down.

However, in 2011, Honda came up with a design for a combination ejector seat/ seat belt for Goldwings. Basically, it shoots you and your seat away from the bike. Not sure if want.

In the UK, another genius came up with the brilliant idea of steel leg guards. Designed to protect in low-speed bumps, the fact did not escape riders that a serious collision would be able to bend that steel leg guard into your flesh, possibly amputating the very limbs it was designed to save.

Another bad idea condemned to the dustbin labeled “STUPID.”

What about airbags? You can get them, either mounted in your fairing or…in your riding suit? Yes, you can become like the Michelin Man in two seconds after impact, sending you bouncing amusingly down the freeway. If you’re riding in canyon country, that could be problematic. Will the bags stay inflated as you bounce down the rocks to the bottom of the gorge? And once down there, will you just lay there wiggling like a toddler in a snow suit?

No…I don’t quite like the idea of airbags on a bike. Many bikes already come with driver airbags. I get this mental picture of being all blown up, like the girl who turned into a giant blueberry in that crazy chocolate factory movie. On top of a mountain. On a windy day. Who knows where you’d wind up?

Here’s an innovative airbag helmet designed by university students. It blows up like a marshmallow around your head. The downside? It’s $400 and not available in the US.

I am a strong proponent of quality safety gear. Many people focus on acquiring the motorcycle and don’t bother to consider good equipment and go cheap with used gear from craigslist or the local swap meet. The only reason I would buy a helmet at a swap meet would be to make a Daft Punk helmet. I would never use it for protection. That’s like investing in used condoms. Would you?

While there are some goofy ideas that would definitely hurt us if they were imposed by law, we do some pretty wonky stuff without their help. Long scarves, leather straps, things hanging down and flapping around can get caught in wheels. Isadora Duncan found that out the hard way.

Famous dancer, long scarf, convertible sports car. Scarf got caught in a spoked wheel with tragic results. Think about that the next time pants that lace up with lanyards on the sides start looking like a good idea. You can get some really weird biker gear in Mexico. They love things that lace up!

A long shirt tail could be a problem if you ride a bobber with a fat tire two inches from your butt and no fender. Seriously, I saw this guy…and I thought, “There is an accident just waiting to happen.”

Even shoe laces will own you. I died laughing at this guy at a light, trying to put his foot down but his shoelace was caught so he kicked a few times and fell over. No harm, but funny as hell.

I’ve had some interesting discussions about innovative safety gear over a few beers. One guy I remember, he was insistent that a rocket powered seat that blows you straight away from the bike was a great idea. What if you’re in a turn and fire it off into a tour bus going the other way? What if you do fire the thing off straight up? There you are, 40 feet in the air with no parachute. Hope you bought a good helmet! He still thinks he can perfect this and get rich. I’m not so sure about that.