Below is the text of the Federal law regarding motorcycle helmets, including performance requirements.  Make sure that when buying a helmet, it is rated to comply with these minimum standards.  Not only must you be legally compliant but, more importantly, you want your helmet to protect you in case of a motorcycle accident!

This standard establishes minimum performance requirements for helmets designed for use by motorcyclists and other motor vehicle users.

S2. Purpose:
The purpose of this standard is to reduce deaths and injuries to motorcyclists and other motor vehicle users resulting from head impacts.

S3. Application:
This standard applies to all helmets designed for use by motorcyclists and other motor vehicle users.

S4. Definitions:
Basic plane means a plane through the centers of the right and left external ear openings and the lower edge of the eye sockets (Figure 1) of a reference headform (Figure 2) or test headform.

Midsagittal plane means a longitudinal plane through the apex of a reference headform or test headform that is perpendicular to the basic plane (Figure 3).

Reference headform means a measuring device contoured to the dimensions of one of the three headforms described in Table 2 and Figures 5 through 8 with surface markings indicating the locations of the basic, mid-sagittal, and reference planes, and the centers of the external ear openings.

Reference plane means a plane above and parallel to the basic plane on a reference headform or test headform (Figure 2) at the distance indicated in Table 2.

Retention system means the complete assembly by which the helmet is retained in position on the head during use.

Test headform means a test device contoured to the dimensions of one of the three headforms described in Table 2 and Figures 5 through 8 with surface markings indicating the locations of the basic, mid-sagittal, and reference planes.

S5.1 – Impact Attenuation. When an impact attenuation test is conducted in accordance with S7.1, all of the following requirements shall be met:

S5.2 – Penetration. When a penetration test is conducted in accordance with S7.2, the striker shall not contact the surface of the test headform.

(a)   The retention system or its components shall attain the loads specified without separation; and
(b)   The adjustable portion of the retention system test device shall not move more than 1 inch (2.5 cm) measured between preliminary and test load positions.

S5.3.2 Where the retention system consists of components which can be independently fastened without securing the complete assembly, each such component shall independently meet the requirements of S5.3.1.

S5.4 Configuration: Each helmet shall have a protective surface of continuous contour at all points on or above the test line described in S6.2.3. The helmet shall provide peripheral vision clearance of at least 105 degrees to each side of the mid-sagittal plane, when the helmet is adjusted as specified in S6.3. The vertex of these angles, shown in Figure 3, shall be at the point on the anterior surface of the reference headform at the intersection of the mid-sagittal and basic planes. The brow opening of the helmet shall be at least 1 inch (2.5 cm) above all points in the basic plane that are within the angles of peripheral vision (Figure 3).

S5.5 Projections: A helmet shall not have any rigid projections inside its shell. Rigid projections outside any helmet’s shell shall be limited to those required for operation of essential accessories, and shall not protrude more than 0.20 inch (5 mm).

S5.6.1 Each helmet shall be labeled permanently and legibly, in a manner such that the label(s) can be read easily without removing padding or any other permanent part, with the following:

(a)     Manufacturer’s name or identification.
(b)     Precise model designation.
(c)     Size.
(d)     Month and year of manufacture. This may be spelled out (for example, June 1988), or expressed in numerals (for example, 6/88).
(e)     The symbol DOT, constituting the manufacturer’s certification that the helmet conforms to the applicable Federal motor vehicle safety standards. This symbol shall appear on the outer surface, in a color that contrasts with the background, in letters at least 3/8 inch (1 cm) high, centered laterally with the horizontal centerline of the symbol located a minimum of 1 1/8 inches (2.9 cm) and a maximum of 1 3/8 inches (3.5 cm) from the bottom edge of the posterior portion of the helmet.
(f)     Instructions to the purchaser as follows:
(1)     ‘Shell and liner constructed of (identify type(s) of materials).
(2)     ‘Helmet can be seriously damaged by some common substances without damage being visible to the user. Apply only the following: (Recommended cleaning agents, paints, adhesives, etc., as appropriate).
(3)     ‘Make no modifications. Fasten helmet securely. If helmet experiences a severe blow, return it to the manufacturer for inspection, or destory it and replace it.’
(4)     Any additional relevant safety information should be applied at the time of purchase by means of an attached tag, brochure, or other suitable means.

Before subjecting a helmet to the testing sequence specified in S7., prepare it according to the procedures in S6.1, S6.2, and S6.3.

S6.1.2 A helmet with a manufacturer’s designated size range which includes sizes falling into two or all three size ranges described in S6.1.1 is tested on each headform specified for each size range.

S6.2.2 Apply a 10-pound (4.5 kg) static verticle load through the helmet’s apex. Center the helmet laterally and seat it firmly on the reference headform according to its helmet positioning index.

S6.2.3 Maintaining the load and position described in S6.2.2, draw a line (hereinafter referred to as ‘test line’) on the outer surface of the helmet coinciding with portions of the intersection of that service with the following planes, as shown in Figure 2

S6.3.1 Before each test, fix the helmet on a test headform in the position that conforms to its helmet positioning index. Secure the helmet so that it does not shift position before impact or before application of force during testing.

S6.3.2 In testing as specified in S7.1 and S7.2, place the retention system in a position such that it does not interfere with free fall, impact or penetration.

S6.4.1 Immediately before conducting the testing sequence specified in S7, condition each test helmet in accordance with any one of the following procedures:

S7.1.1 Impact attenuation is measured by determining acceleration imparted to an instrumented test headform on which a complete helmet is mounted as specified in S6.3, when it is dropped in guided free fall upon a fixed hemispherical anvil and a fixed flat steel anvil.

S7.1.2 Each helmet is impacted at four sites with two successive identical impacts at each site. Two of these sites are impacted upon a flat steel anvil and two upon a hemispherical steel anvil as specified in S7.1.10 and S7.1.11. The impact sites are at any point on the area above the test line described in paragraph S6.2.3, and separated by a distance not less than one-sixth of the maximum circumference of the helmet in the test area.

S7.1.3 Impact testing at each of the four sites, as specified in S7.1.2, shall start at two minutes, and be completed by four minutes, after removal of the helmet from the conditioning environment.

S7.1.4 (a) The guided free fall drop height for the helmet and test headform combination onto the hemispherical anvil shall be such that the minimum impact speed is 17.1 feet/second (5.2 m/sec). The minimum drop height is 54.5 inches (138.4 cm). The drop height is adjusted upward from the minimum to the extent necessary to compensate for friction losses.

(b) The guided free fall drop height for the helmet and test headform combination onto the flat anvil shall be such that the minimum impact speed is 19.7 ft./sec (6.0 m/sec). The minimum drop height is 72 inches (182.9 cm). The drop height is adjusted upward from the minimum to the extent necessary to compensate for friction losses.

S7.1.5 Test headforms for impact attenuation testing are constructed of magnesium alloy (K-1A), and exhibit no resonant frequencies below 2,000 Hz.

S7.2.1 The penetration test is conducted by dropping the penetration test striker in guided free fall, with its axis aligned vertically, onto the outer surface of the complete helmet, when mounted as specified in S6.3, at any point above the test line, described in S6.2.3, except on a fastener or other rigid projection.

S7.2.3 The application of the two penetration blows, specified in S7.2.2, starts at two minutes and is completed by four minutes, after removal of the helmet from the conditioning environment.

S7.2.4 The height of the guided free fall is 118.1 inches (3 m), as measured from the striker point to the impact point on the outer surface of the test helmet.

S7.2.5 The contactable surface of the penetration test headform is constructed of a metal or metallic alloy having a Brinell hardness number no greater than 55, which will permit ready detection should contact by the striker occur. The surface is refinished if necessary before each penetration test blow to permit detection of contact by the striker.

S7.2.8 The rigid mount for the penetration test headform is as described in S7.1.11.

S7.3.2 The retention system test device consists of both an adjustable loading mechanism by which a static tensile load is applied to the helmet retention assembly and a means for holding the test headform and helmet stationary. The retention assembly is fastened around two freely moving rollers, both of which have a 0.5 inch (1.3 cm) diameter and a 3-inch (7.6 cm) center-to-center separation, and which are mounted on the adjustable portion of the tensile loading device (Figure 4). The helmet is fixed on the test headform as necessary to ensure that it does not move during the application of the test loads to the retention assembly. 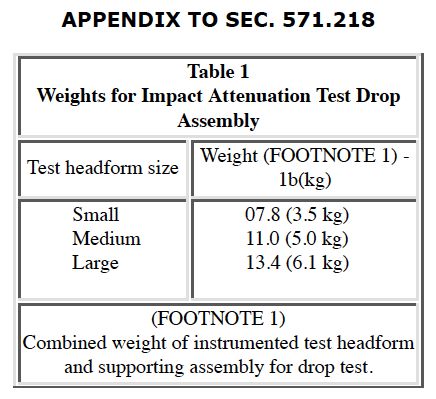 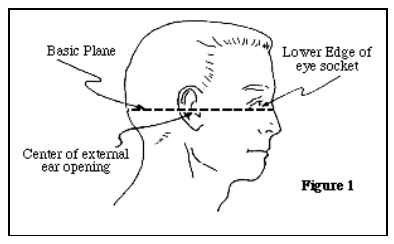 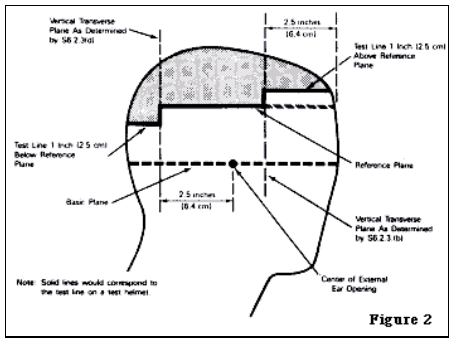 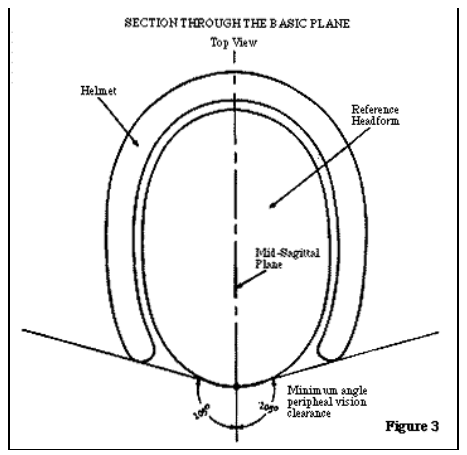 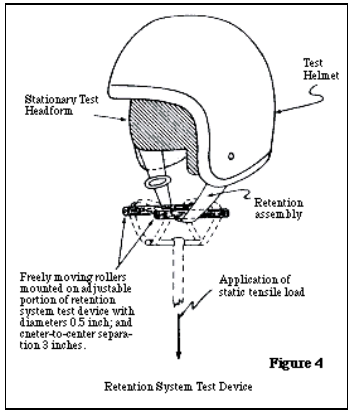 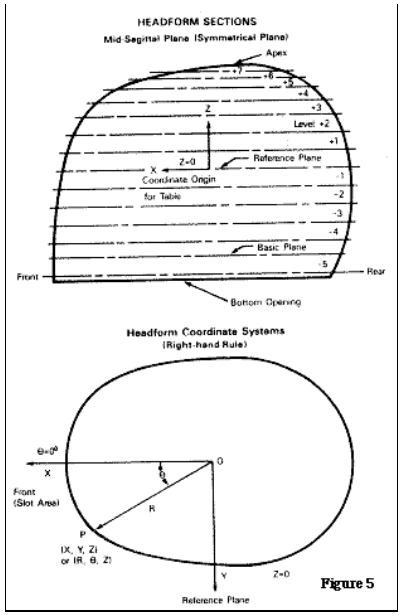 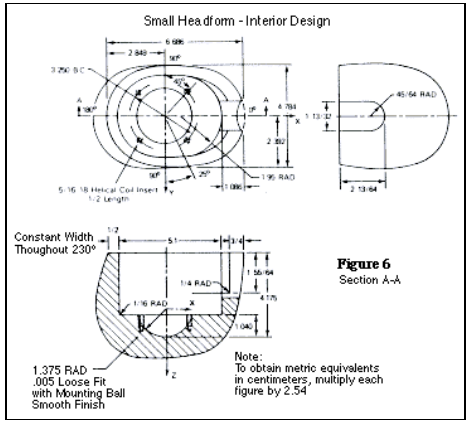 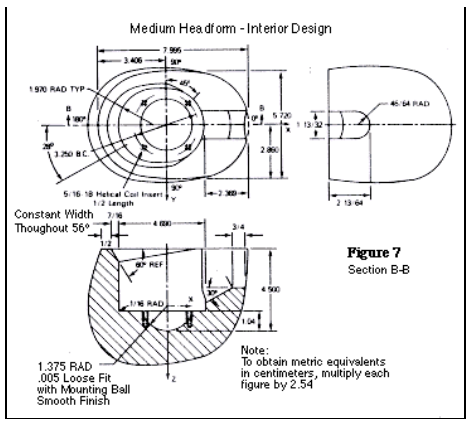 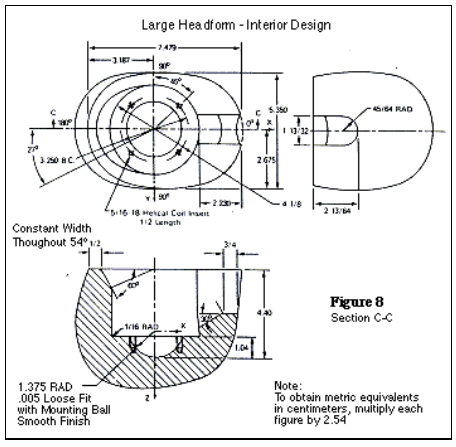