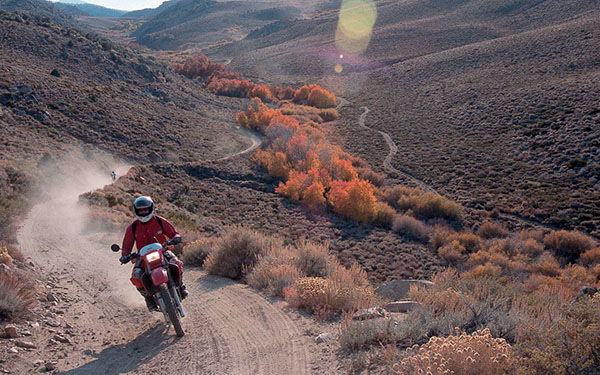 Can a dirtbike be made street legal in California?

Remember January 31, 2004? Probably not. It was mostly a day like any other. Some birds chirped (others carried the flu), some babies were born; having been 6 days after my birthday, I was coming to terms with having turned 15. It was a day that in so many words was not particularly significant…historically speaking

Then February 1 happened, and everything changed…for California dualsport riders anyway…

Beginning February 1, 2004, dirtbikes could no longer be registered for dualsport use. Why the change? According to a document released by CARB this was because for years, due to a mistake made by the DMV, motorcycles that were not CARB certified were being allowed dual-purpose registration. In 2000, CARB contacted the DMV and informed them of their mistake. The DMV decided to change their rules to correct the mistake, but first there was a discussion on when this change should take place.

Fortunately, due to collaboration between the DMV, CARB and the AMA (American Motorcyclist Association), the date to close this oversight was delayed until 2004. If you purchased a motorcycle before January 1, 2004 you had until January 31, 2004 to register it for the street. Bikes purchased after January 1 were not eligible

From that point on, the only motorcycles that could be plated legally for the street must have been CARB certified to street standards by the manufacture (not owner or dealer). Motorcycles older than 1978 are also able to be plated legally.

That should have been the end of the story, but it wasn’t.

In September of 2006, CARB became aware that many bikes continued to be plated after February 1, 2004. Rather than simply closing the hole, they actually went back through DMV records to find motorcycles that were mistakenly plated. The DMV then sent letters to these owners in the mail stating that they were incorrectly plated, and that their current street registration is now null. Owners were instructed to send in their license plate and had the option of registering for a green sticker.

Fast-forward to today and we see that motorcycle manufactures have adjusted their lineups to suit California’s new policies of enforcement. Many street-registered dirtbikes are now being offered that are more aligned with the pre-2004 enduro philosophy…that is, dirtbike first, streetbike second. For those who are not satisfied with the street legal dirtbikes being offered, you have some options.

Most obviously is to purchase a motorcycle that was registered for street use prior to January 31, 2004

Less obviously is to purchase a motorcycle from another state and use it here. A motorcycle with a plate from Arizona for example may be registered to a California address. You’ll still want to convert it for California street-use by adding turn signals, head light/tail light, license plate light, horn and rear view mirror if this hasn’t already been done. I have read that police are more strict on out-of-state plated vehicles they suspect are being used permanently in California. You take your own chances. It may also be an option to purchase a dirtbike and have the plate issued in another state.

An additional option is to buy a frame for your motorcycle that is California plated. These however can run at a premium. I sold a plated XR650R frame for $650 once! Not to mention they will be quite rare.

There do seem to be services available for plating dirtbikes in California, but as to their reliability and legality, I cannot comment. It may very well be that they plate them in other states, or strip the documents off another salvaged bike. The former would be legal, the latter not in the slightest (unless they also swap frames and update the engine identfication number on the title).

So in conclusion, my answer to the question “how to make a dirtbike street legal in California” would be that it depends on whether or not you already have the bike, and how creative you’re willing to get with the process.

Have you successfully registered a dirtbike for street use in California? If so I’d love to hear about it. Write me at Jacob@RiderzLaw.com or leave a comment below

I write this after having just returned home from helping a friend purchase a California plated 2001 Yamaha WR400F. I asked the seller about the plate, and he said that he purchased the bike a few years ago (2011-ish) with green sticker only (or rather, with no street license plate/registration). He called the DMV to ask about getting a license plate for street use, and they told him that his bike was eligible.

So he installed a brand new Baja Designs kit and took it into the DMV for inspection. Apparently they offered him some hassle in the process, but did in fact give him his registration and plate. Since then he has apparently had zero issues.

So there you have it, if you weren’t already confused enough about the direction of how to get a California plate for your dirtbike, you now have the old fashion option to consider. Give the DMV a call and ask specifically about your bike (give them your VIN). If they say you can get a plate, record as many details about the call as possible (the person you spoke to, the date, etc). This way if you’re hassled at the DMV, you have some documentation to provide that you made every attempt possible to confirm your bike was eligible for street registration.

And of course, whenever dealing with state employees, there is a bit of luck involved. Be polite, dress nicely and don’t lose your temper! The folks at the DMV get paid a pittence to sit around and deal with disgruntled citizens all day. Treat them with appreciation and they just might be willing to go out of their way to help you.