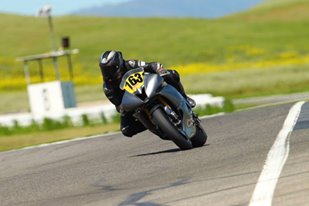 Following the rather eventful moments during my previous race weekend, the Pacific Track Time weekend event at Thunderhill Raceway was looking to be an interesting experience for me. I was still recovering, and until a couple days before the event, I still wasn’t sure if I could even tolerate the drive to and from the track. Eventually I made the decision to attend, but decided against bringing my bike. A friend had offered his second bike (which was going to be at the track for the weekend) if I really wanted to try riding at some point. This seemed a wiser choice since I knew if I was able to ride, it would be slow, and I didn’t want to be on my race bike – besides the fact that I really wanted to give the race bike more of a shakedown/look-see before riding it again.

For Saturday I chose to just help out in other areas, helping out with registration in the morning, attending the C-group orientation classes and then taking some shifts on the grid. This made for a fairly relaxing day, and I was feeling pretty good by the end of the day, so the thought of riding on Sunday was seeming more tempting. I still wasn’t sure how painful it would be to actually be on a bike, in full leathers, but decided to give it a go.

The first session out I hopped on my friend’s R6 that he had picked up as his new track machine. DareDevil Motorsports was going to be taking the bike at the end of the weekend to have the frame checked, suspension upgraded, some mapping/electronic bugs fixed, and give it some other love as needed, so I knew the bike wasn’t going to handle great, but figured I’d be going slow anyways. I headed out for the first C group lead follow to test out my ability to even be on a bike. Thankfully it didn’t seem too horrible, so finished up the session and decided to putter around in C group for the rest of the morning.

Thankfully, riding itself wasn’t too bad. Getting into the suit was less than comfortable, but once on the bike, nothing like the “ouch” I was experiencing the previous weekend after my little incident. By the afternoon I was ready to step up my pace a little bit, and did a couple B group sessions. The bike was kind of like riding a wet noodle, but being a 600 (and coming off my fire-breathing-dragon ZX10R) I wasn’t finding the bike intimidating at all, although I still wasn’t too interested in pushing anything with the noodle-y ride I was experiencing.

“Noodle” – Photo by Dito with gotbluemilk.com

After a couple sessions in B I decided to call it a day – riding had been fun and relaxing, and considering I was on someone else’s bike (that I have officially named “Noodle”), I didn’t even feel bad about going slowly and taking my time. The drive home was a bit more uncomfortable than I would have liked, but got home and unloaded in one piece, having enjoyed my weekend at the track.