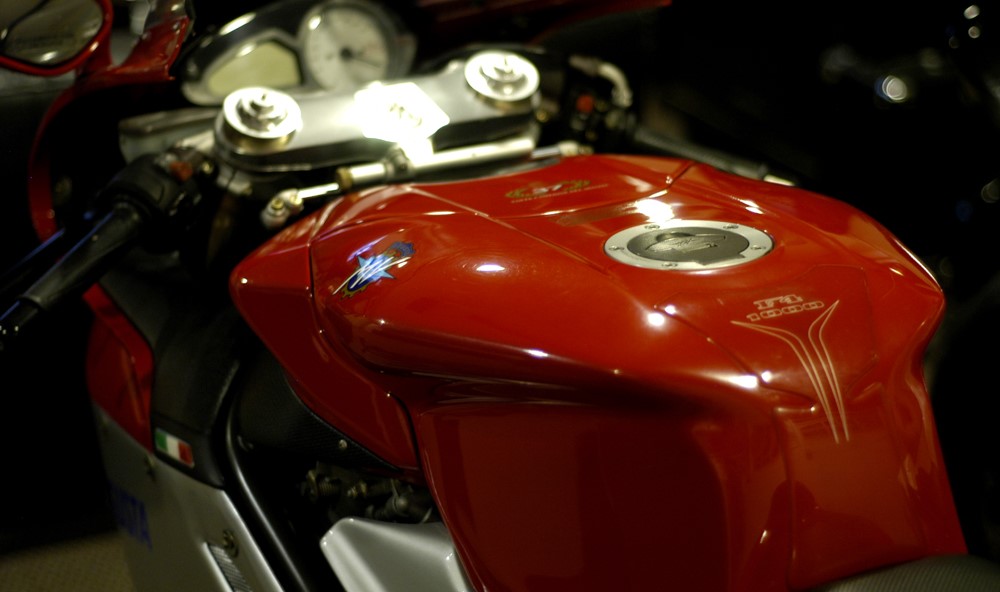 Oh, for sure, this bike is a looker. But trust me. If ever you get a chance, you must ride an F4.

Some bikes intrigue you because of a particular novelty about them that just may be exclusive to that bike. Maybe it’s some new and trick performance part, or maybe its an aesthetic thing. I’m never going to deny that the latter was the reason an F4 always stopped me dead on my tracks. I certainly can’t blame others who feel compelled to ogle over the bike whenever I took it out. Love with sight – that is the F4’s novelty. But as much as I like showing my F4 off to the world, there’s something else I really want everyone to experience. In fact, any friend of mine who is willing to ride it, I can’t get them fast enough to do it. I even turn the ignition on for them and hand them their helmet. I want them to experience the pleasant surprise I found on my first ride.

You’re not going to notice anything profound as soon as you hop on an F4. Its ergonomics is standard sporty and nearly torturous, which is also standard on any Italian sportbike (‘uncompromising’ is what I believe they call it). Its heavy compared to today’s bikes, which is true of any sportbikes from its era really. You fire it up and with the OEM exhaust it sounds too mechanical, also true for any sportbikes with OEM systems, though at least the F4 has a resonance in its baffled notes. But that’s another story I may speak on.

You pull the clutch lever in, step on the toe shifter, then try to feed the clutch back as careful as you can to get the bike moving from a standing stop. Even if you’ve been riding motorcycles, this may feel different for you. Even if you’re used to an Inline-4 engine, this may feel different for you. The best way I can describe the F4’s radial-valved inline-four engine in one simple word is that it is racy. Its engine is high-strung, and you’ll get a taste of that as you click the gear in first gear from a stop and try to take off. You’ll find that you’re going to need to twist that throttle relative to feeding the clutch lever out, else the bike feels like it wants to bog. It isn’t shoddy maintenance – its just characteristic of the bike. I’m not going to talk about the hows and the whys of it all. There is plenty of information to be found on the web that would explain the technical specifications of the F4’s engine and why it does what it does, or why it feels the way it does. I’m not interested in regurgitating those.

I’m only interested in trying to put into words the sheer joy twisting the throttle of a bone-stock MV Agusta F4 might bring to your motorcycling inner child.

I have NEVER, up to now, experienced a motorcycle engine on a street motorcycle spin up as fast as the F4’s. I have owned and ridden many 1000cc inline-four sportbikes, but none of them have the sheer speed at which their engine accelerates like the F4’s. I am so used to inline-four engines that have a flat spot in the middle, so even when you’re twisting the throttle wide open, there is a point in the powerband when it stops accelerating for a moment, before it kicks into gear again and finally unleashes all its ponies.

The F4 is different. You get the bike in gear and engage the clutch in full, and all ponies are out of the gate at that point. The bike eats up tarmac at a rate that is in direct correlation with degree in which you turn the throttle. You really do have to be careful with your right hand. It’s like that saying that if you’re carrying a weapon, you better be ready to use it; you put your right hand on an F4’s throttle grip, and you better be ready to fly. It is mind-bogglingly fast that my head is left trying to catch up and try to process at a rate in which it needs to process the information as it flies past me, so instead it just leaves me rendered like a little kid strapped to a rocket, laughing maniacally in my helmet. I promise you the latter is the only thing NOT hyperbole in the previous sentence.

For all its good looks, the F4’s engine is what truly brings me joy when riding it.