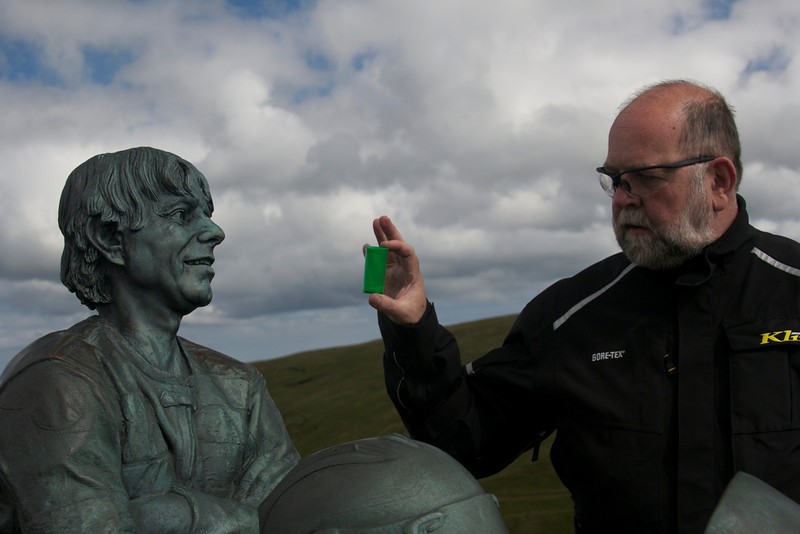 From the Cambridge English Dictionary:

Usually when we hear the term, pilgrimage, it’s in the context of a religious journey, whether to Mecca, or Rome, or the Holy Land.  In the second definition above, any place with special significance to the pilgrim, any place the pilgrim might go to show respect.  That opens it up a bit, doesn’t it?

Looking back on many of my tours, I realized that they have been pilgrimages, whether I had been consciously aware of it at the time, or not.  Let me give you an example.  One year, I found myself in England with a motorcycle and time on my hands.  Having heard about the Isle of Man TT since I was a kid, and having long heard about the exploits of the legendary Joey Dunlop, it seemed like a great opportunity to visit even though no races were scheduled at that time.

Having made the decision to go, the rest of the process seemed a bit magical.  Deciding what ferry to take to and from the island, getting that ferry ticket booked, and finally selecting a route to get me across the top of England to the ferry terminal that was filled with roads and place names that I had read about – all this fueled my anticipation of the trip.

Arriving at the ferry terminal in Heysham, lining up (queuing in Brit-speak), loading up and getting the bike tied down for the crossing brought up thoughts of all the motorcyclists who had done so before me, and all who would come after.  I could feel that I was stepping into the stream of history.  As the ferry ambled its way across the Irish Sea my anticipation ramped up, and seeing the port of Douglas come into view had me practically jumping out of my skin with excitement of finally being in this fabled spot, with the IOM flag flying over ancient battlements.

As my passenger and I rolled off on to the Douglas Promenade, all the many TT videos I had watched over the years came flooding into my mind.  We rode up the prom and went looking for fuel.  When we pulled into the gas station, it was buzzing with more than a dozen bikes, which I thought was a bit odd given that it was about supper time on a Tuesday evening.  While I was gassing up, a local stopped his bike just inches from my back tire, and asked me if I knew what was going on that night.  He told me that this night was the Joey Dunlop memorial ride, and he invited me to join in, asking me if I knew where the pits are for the TT.  I told him I was sure I could find them.

We headed for the pits by following the hordes of other bikes also going there. When we arrived, the biggest challenge was finding a place to park among the hundreds of other bikes.  We ended up hitting the jackpot by parking next to Graham, a recent immigrant to the IOM from South Africa, and riding an NS400 Honda in full Rothmans livery.  Graham gave us the lowdown on what was happening and what to expect. The plan was to join hundreds of my new friends on a parade lap of the island in front of TV cameras and spectators. It was every bit the peak experience you would think it would be, meeting former GP star, Steve Parrish, and shaking hands with TT winner, Chris Palmer, and lapping the island at sometimes startling speeds.

Since the plan had been just to visit the island, we had booked a ferry back to England the following evening.  That meant that we had to cram a bunch of activities into the next day.  It seemed like every stop, every interaction opened another door to a wonderful experience.  After knowing I was heading to the IOM, I offered the widow of a friend to take some of his ashes there.  He loved the TT but had never visited.  That meant that job one that day was to find a place for his ashes.  We rode around the island looking for a good spot, when we came to the Joey Dunlop memorial up on the mountain.  It was a privilege to introduce my friend, Gary to my idol, Joey.

The next stop had to be lunch at the famous Creg ny Baa pub on the mountain where we had the good fortune to meet a man who had finished on the podium the same year I was born!  The conversation with him led to a recommendation to visit a private motorcycle museum in Kirk Michael.

Passing through Douglas on the way to the museum, we were pursued by a Manx motorcycle cop.  My momentary panic subsided when he just wanted to know about the California license plate on the bike, and what we were planning to see on the island.  I told him about the museum, and he confirmed it was great, but that it wouldn’t be open that day.  He recommended that we go anyway to see if the owner might open for us.  We did, and he did.  We got a private tour of a remarkable museum filled with Manx Nortons and Triumph Speedtwins, and Greeves streetbikes, and detailed tour of the workshop where restorations are done before being sent on our way.

Every stop on the island seemed magical, and every encounter serendipitous.  Why had the visit played out this way?  Was this something unique to the Isle of Man?  Thinking back on it, it was because whether I had realized it or not, I had approached the visit as a pilgrimage.  I was immersed in the history of the place and its famous competitors, I had studied the places and their significance.  All these things, and their importance to me, made me truly a pilgrim, but I was not the only one.  The rider in the gas station who invited me to join in, Graham from South Africa and his incredibly trick Honda, the old man we met in the Creg, the cop in Douglas, Tony East and his museum, and even Joey Dunlop himself were pilgrims.  They knew the history and significance of the place.  They made a conscious choice to participate in the living history of the island, they committed themselves to the magic of the place.  Pilgrim knows pilgrim.  They recognized me on the road and made it possible to join in too.

What I’ve come to realize since then is that many rides can be rides to place that are special, and where I can show respect.  Maybe it’s to the National Motorcycle museum, or national parks, or a tour of the volcanoes on west coast, or maybe the most famous of American motorcycle pilgrimages, Sturgis.  All I have to do is to recognize that’s the case, and prepare myself by knowing the places and their history and significance, then go on the journey with that significance in mind, and show up respecting all those who’ve gone before, and those who will come after.  Doing so gives extra richness to the journey.

What pilgrimages will you take on your motorcycle?