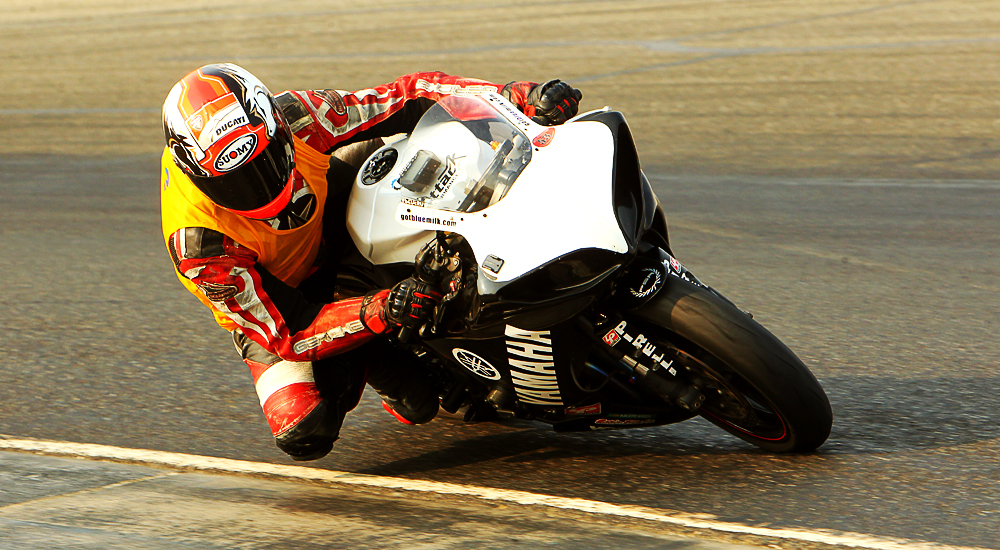 There were two fundamental problems I told Rob – my riding coach – that I had when it came to my track riding, which I believed were holding me back from a lot of time I could gain every lap. One was leaning the bike too much, past the point of grip through corners, and the other was getting on the throttle too much, too soon, when exiting corners.

The second problem is kind of ironic because I worked so hard on my braking into corners, that I was never satisfied with my braking unless the bike’s rear end was moving underneath me. But when it came to getting on the gas out of corners, I was terrified of any movement or sliding from the rear due to the throttle.

Admittedly, this apprehension does come from a history of having high-sided once at the track before. That one sour experience kept my right wrist reluctant from getting overzealous at corner exits ever again. It absolutely kills my drive at every straight or run between corners, but it also has kept me on the bike this whole time. Better safe than zooming, I guess.

It was November of last year, and after a heartbreak at Thunderhill Raceway the month before, I wasn’t sure that I could go any quicker at our last weekend event for the season. It wasn’t just because I had relegated myself to cracking the two-minute barrier around Thunderhill in the 2019 season, but my rear tire was basically done at that point. There was no way to go quicker unless I got a new rear tire, which I was reluctant to do at that point as I was just closing out the season.

I did think about it though. Our season closer is a 2-day weekend at Thunderhill Raceway, so the thought of spending two consecutive full days on spent tires was unappealing, even so late in the season. But in the end, I just left the tires alone.

Which actually made for a good learning experience.

It’s a different kind of fun when you have no rear grip!

The tires were so shot – especially the rear – that the bike would move out of every corner it seemed, the instant I would apply the throttle. It didn’t matter that I would gently roll on the throttle at corner exits, the rear would slide.

The pleasant surprise was in how controlled the slides were. Sure it took a few of them for me to stop panicking as is my natural reaction, but once I came to expect them, it made me realize that the loss of rear grip isn’t necessarily a cliff with a steep fall. It’s more of a gradual descent with flat spots, allowing you slide down with some control.

Maybe it was characteristic of Pirelli tires, who knows? But the first day of that weekend that I spent on a well-used rear tire served to alleviate a lot of my apprehension about letting the rear move on the throttle out of corners. The rear may slide, but I can still catch it. The bike may buck underneath me, but it isn’t trying to throw me off.

After that, I had a better understanding of what I can get away with at corner exits.

It was just a shame that I discovered it so late in the season.