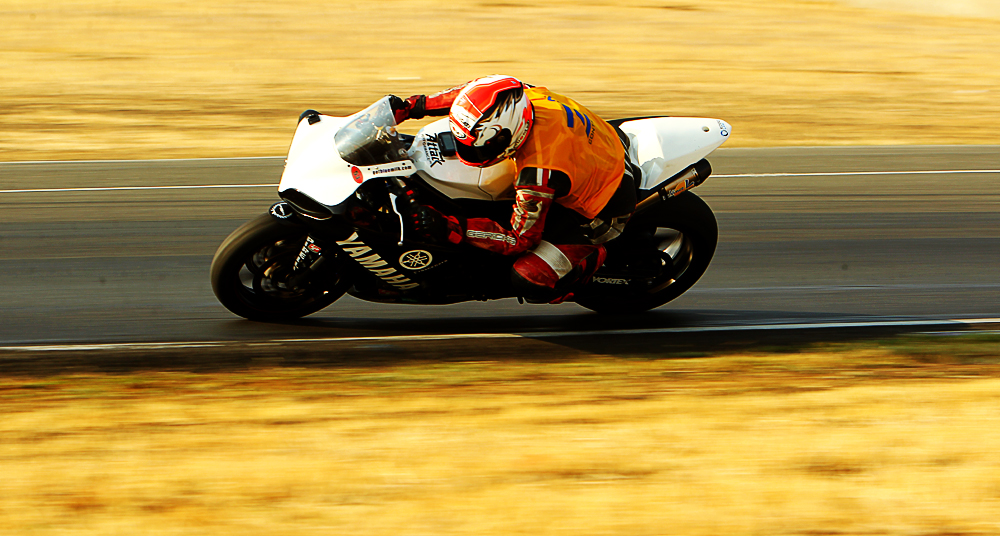 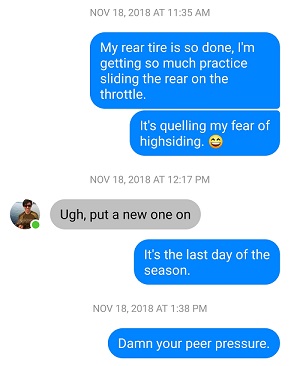 Riding Coach Rob is persuasive. You’d think he’d be glad to read that I’ve quelled one of my fundamental fears out on track.

In any case, I couldn’t not listen to him, or why else did I ask him to coach me? So on the second day of our final event for the 2018 season I set aside my thrifting principles and handed my AMEX over to CT Racing (http://www.ctracetires.com/) for a new set of track tires.

Up until that point I was still riding on Pirelli’s race DOT tires, which is their very sticky but still street-legal tire. Unfortunately, they were out and all they had remaining were slicks. I thought what the heck, may as well give slicks a try. Except that they were also out of SC1s, which is what I had been running as a front tire to provide me with more grip than I need for braking and cornering. All they had left were SC2 slicks. I have experience with the SC2s, but not since I switched over to SC1s. Old me would’ve probably said forget about it and just wait for the 2019 season to put on new tires after all. But I knew if I did I would feel the sonic boom from SoCal-based Riding Coach Rob’s epic facepalm if I told him. So I gave our tire guy my card and both of my wheels to shod them with the SC2 slicks.

Some of my friends were unsure about a return to the SC2s, especially with my goal of trying to do Thunderhill Raceway’s 3-mile course in under two minutes. And sure, I kind of concurred. I’m going to try to go quicker on harder compound tires than what I’ve been using?

I second-guessed my decision as I mounted my freshly-shod wheels back on my bike.

The 4PM A-group session rolled around, and so did I out on track. As is my tendency once out on track, I forgot about the type of tires beneath me and I just rode, as fast as I could.

And finally, on my second flying lap of the session it flashed before me:

It’s not unusual to have some regression after a crash. The same can be said when you switch to a totally new bike, having to learn how it likes to be ridden. So after suffering a lowside crash at Sonoma that totaled my ’02 R1, forcing me to move on to my ’09 R1, I honestly didn’t expect to be going as fast on the new-to-me-bike as quickly as I did. I thought that I would need at least a season’s worth of riding on the newer bike for me to figure it out, to get comfortable on top of it. That’s what happened the last time I moved to another bike. So I certainly didn’t think I was going to accomplish my goal of going sub-2:00 around Thunderhill Raceway by last year’s end.

Maybe I underestimated my own abilities.

I had to make sure to remind myself of all of these as I pushed my goal post for the following season.

(If you’d like to see my lap, you can watch it in this vlog I made.)