After a somewhat fitful night of sleep, it was time to get up, pack up, have breakfast, check out, turn in my luggage, and head to the start.  Apparently, the organizers wanted to have the start in a place where we could stage all the bikes, have a special test, and leave the start under the Centopassi arch.  Not that much room at the hotel, so the start was a mile or so away.

Examples from the roadbook: 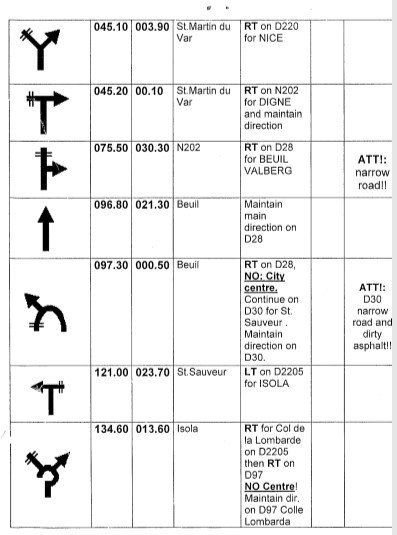 Standing around the start provided an opportunity to check out the other riders’ bikes.  There was some cool stuff there, including an old and very trick RZ350, and the old BMW being ridden by the Team UK captain, Colin (more on this bike later), and loads and loads of Ducatis.  Mine was the only TDM. 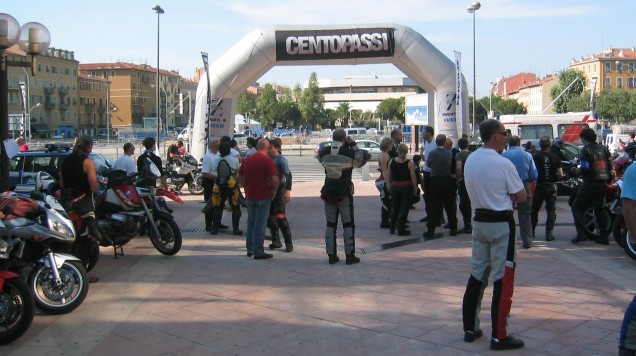 The special test was pretty simple.  We needed to ride 10 meters from a standing start in exactly 10 seconds without putting a foot down.  Points were deducted from a rider’s score for doing it in more than or less than 10 seconds or footing it.  These were tie breakers measured down to the 100th of a second.

As promised, I could see Team UK on the side of the road ahead of me when I came out of the start at 10:34AM.  As I approached them, they shot away from the curb like they had collectively seen a ghost.  I hooked on to the back of the group, and it was ON!

The sun was already baking us as we moved away from central Nice towards the suburbs.  It seemed like a circuitous route, and the method to the madness soon became clear as the route climbed into the foothills via a tiny road with something like 15 or 20 hairpins to get us warmed up.

Shortly after arriving at the top, there was a wrong turn taken, and suddenly we were down to two riders; Colin and me.  It wasn’t clear where David and Dominic had gotten off to.  We debated for a few minutes about the best course of action, then decided that we weren’t going to drop time right off the start.  Colin had loaded the roadbook into his GPS, so we decided we would intercept the other guys later, maybe at lunch.

Continuing on, in and out of villages in the Maritime Alps, we came upon a crash.  One of our fellow competitors had thrown his bike under a truck.  The rider was okay, but the bike was a write-off.  I was getting a whole new perspective on what I’d gotten myself into.

The road dropped us down into a river valley, and a main road heading north.  We were making a pretty good pace when a handful of local riders blew past us, so we decided to tag along and match their speed.  This kept going for a few minutes until we came upon this nondescript, blue sedan, and our new friends suddenly turned off the road.  We continued to close on the sedan until we got close enough to see that the driver was wearing a uniform.  Holy crap, it’s a cop!

This was my introduction to the gendarmes in rural France.  The officer looked at us through the rearview mirror, and turned up his palm as if to say, “What?”  Then he waved us around him.  Now it’s important to know that he was already driving the posted limit, and the section of road we were on was a shallow left-hand bend with a solid white line down the middle, an equivalent of our double yellow line.  So, the cop is asking me to make an illegal overtake when he’s already driving the limit?  Is this a trap?  Just then, Colin shot around both of us, and I followed.  No lights or sirens.  Welcome to France!

About that time, the roadbook took us on to a minor road climbing up through a spectacular red rock canyon.  In many places the road was too narrow for two cars to pass by one another, combined with huge rock overhangs, and occasional rock falls in the road.  We were truly heading up into the Alps now.

The route twisted around, dropping into valleys, and climbing back out again, switchback after switchback, all the time getting higher and higher until we passed through a ski resort, and broke out above the tree line near Isola 2000, and there we found David and Dominic at a food truck at the base of the Col de la Lombarde, which would be our first truly high Alps pass.

A quick lunch of grilled sausage, peppers, and onions on a baguette, washed down with an Orangina, and we were on our way again.  The road was remarkably narrow.  About the width of a golf cart path, with two-way traffic, including tour buses!  The scenery was spectacular, the road was incredibly fun, and the pace of my new friends – and the other competitors – was torrid. 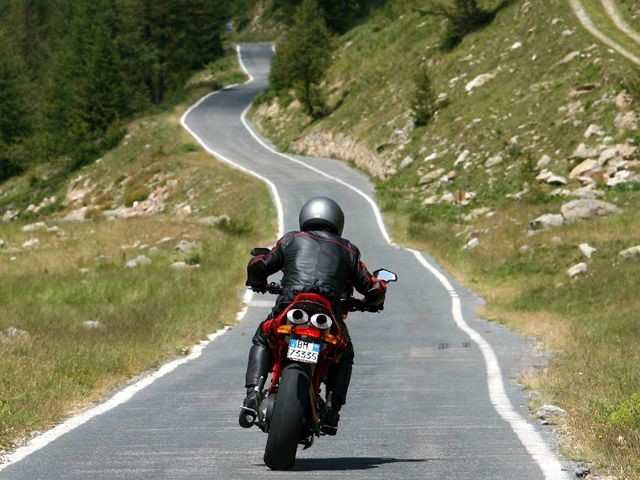 Our post-lunch crew included our new friend, Dutch Peter, and a couple of other European riders who just fell into our group.  This group continued my advanced class in European road norms.  Often, we would come up behind a French driver, and that driver would neither pull off, nor slow down, they would just ease slightly to the right to communicate that the driver had seen us and expected us to pass.  How polite!  The real education happened when drivers would do this even as traffic was coming the other way, with the apparent expectation that we were to pass right then.  The first time my teammates took off to overtake by splitting lanes of traffic moving in opposite directions, I was in complete shock.  However, desperate to not lose my navigator, I took a big breath and a bigger handful of throttle and chased after them.  OMG, I’m gonna die!!!

After about a half hour of this kind of stuff, we pulled up at a resort to take a break, get something to drink, and to continue my education in the public toilet.  They told me it’s called an alpine toilet, and it took a bit of balance and coordination to use it without soiling myself. 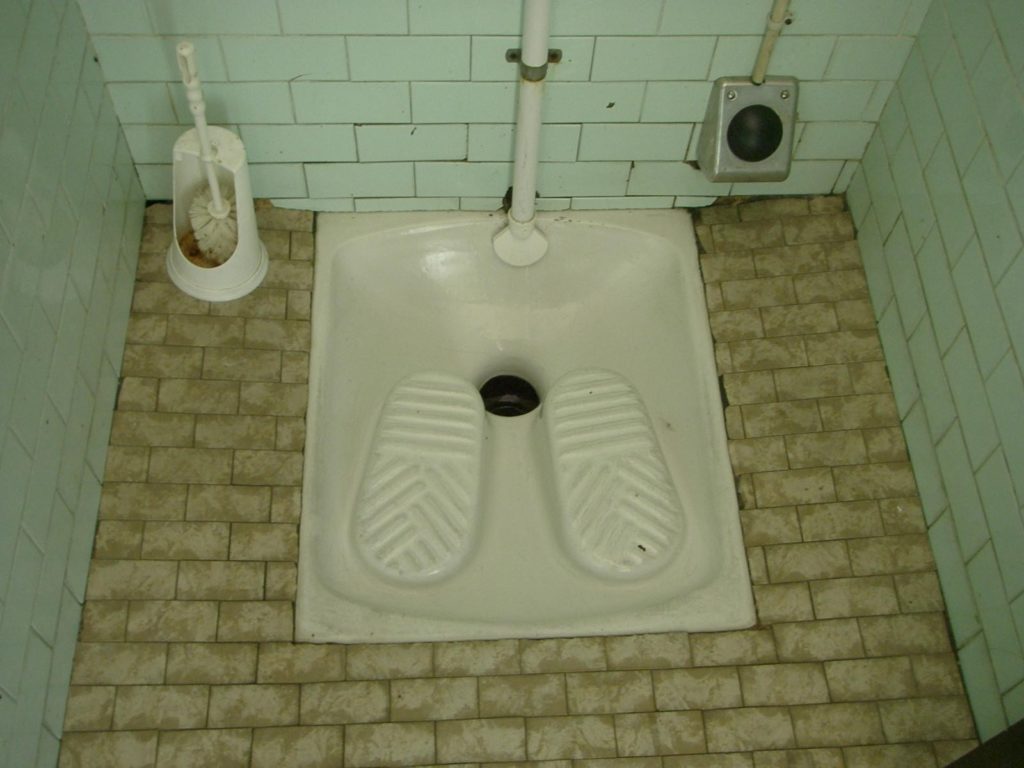 Day one had already been surprisingly stressful and tiring, and we still weren’t to the finish.  Colin said he was familiar with the roads we were on since they were close to a place he likes to stay outside of Briancon, and he was comfortable he could get us in on time.

Many of the roads we had been on that afternoon had been commercial roads with all sorts of traffic, but for the last leg into Bardonecchia we turned onto the Col de L’Echelle that would take us back into Italy.  The road began as a rapid meander through a high alpine meadow, then climbed through the trees, becoming ever tighter and more technical, passing through narrow tunnels near the top.  Breaking out of the tunnels and descending on switchbacks down the rock face above Bardonecchia was my introduction to a type of road engineering I’d never seen before.  Rather than place culverts under the road surface to channel run-off, the road surface itself had ditches/water-bars cut across the road and surfaced with asphalt.  This led to some unintentional airtime coming down towards the finish.   One competitor slammed his front wheel into the opposite side of the water-bar, launching himself over the bars, and trashing the bodywork of his ST4.  Fortunately, he was okay.

We rolled into town and followed the signs to race headquarters at the hotel, checked in with our timecards, and got ready for the special test of the evening.  Day 1 was in the books.  I was still running, and had not dropped a ton of time, though I dropped points during the special test.

Off for dinner and then time for bed.  I don’t know what I would have done without Team UK.