As the days until the Centopassi counted down, I was busy getting ready, and figuring out what I would wear and how I would manage luggage.  The organizers had a luggage truck for participants, but I would have to arrange to carry my luggage with me before and after the event.  The organizer’s website told us to expect all kinds of weather during the event.  Everything from blazing heat down by the coast, to cold rain up in the Alps.  Mesh gear with rain lines looked like the best option, along with waterproof boots, and a full coverage helmet, all of which I could get into the duffel bag and throw-over saddlebags I borrowed from a friend.   The rental bike came with a top box that also helped ease the luggage issue for riding later with my wife.

Off to the airport, checking my luggage and carrying my helmet on to my flights, I settled in for the long haul to get to Nice.  Arriving in this gorgeous city in the early evening, I grabbed a taxi from the airport to my hotel in center of the city, about six blocks from the bike rental agency.  Despite being tired from the flight and my inability to sleep for any time at all on airplanes, the excitement made it difficult to sleep.  The only thing to do was to walk around the city on the warm, humid evening, and take in the sights.

When morning came, I was just about to jump out of my skin with excitement!  When I got to the rental agency, they had upgraded me to a Yamaha TDM900 with fresh tires (score!), the owner gave me directions to head up the Maritime Alps, and I was off. 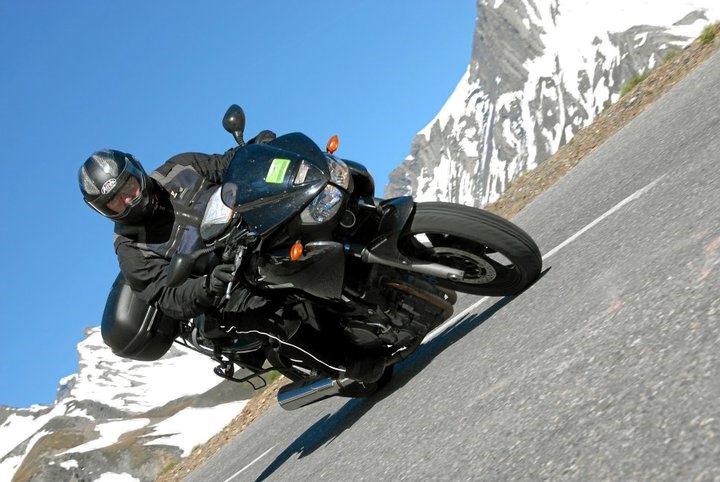 This was not my first trip to Europe, nor even my first trip to Nice, but I had never ridden a motorcycle outside of the US before.  In addition to riding a completely unfamiliar bike, I had to navigate an unfamiliar place, read road signs in another language, and get used to local riding customs too.  All of this, knowing that come the next morning, I would be riding in competition, and I needed to have all this stuff sorted.

Heading out of town provided my first two lessons.  It seemed like everyone there was riding scooters, two-stroke supermotos, and none of them were wearing any gear beyond a helmet.  They would give me in my full riding regalia sidelong glances that seemed to say, “You’re not from around here, are you?”  Okay, lesson one is that the locals don’t wear any gear.

Lesson two was more humbling.  I live and ride in California, the first state in the US to allow lanesplitting/lanesharing, and I figured I was pretty good at it.  Wrong.  At every red light the local scooteristas would force their way to the front, and any hard surface was fair game to ride on.  Lesson two was always be passing.  Everywhere.  Getting out of town was a relief.

The last time I had been in Nice, years before, I had taken my rental car into the Maritime Alps, so I tried to recreate that route.  It didn’t take long to begin the climb to higher altitudes, narrower roads, and great views.  The bike seemed like it would be fine, and everything else seemed to be coming together.  I managed to buy gas a couple of times, and to pick up food for a roadside picnic.  My confidence was growing, and it was time to head to the hotel where the event was headquartered to check in and put the bike through tech inspection.

Getting all my stuff (credentials, luggage tags, numbers for the bike) was really exciting.  When I mentioned to one of the organizers that I had gotten fresh tires, her response was, “Good, they’ll be used up by the end of the week.”  Having never used up a set of tires that quickly, I was wondering what I had gotten myself into.  She also mentioned that I was the only American running the competition class that year, which was a little disappointing because I was hoping to meet someone who might have some experience.  This also set my identity for the rest of the event as “the American”.

The hotel was incredibly posh, and just across the park from the Mediterranean.  The views were stunning.  After getting settled into my room, I headed up to the roof for the open bar reception.  While at the bar I was introduced to a British rider named Ashley who informed me that there was a team from the UK riding the competition class, and he offered to introduce me to them over dinner.

My dinner companions were all quite accomplished riders, with the team captain, Colin, a London dispatch rider, the second rider, Dave, who was an advanced riding instructor working for a school in the north of England, and Dominic who was the only one who was not a professional rider.  We had a lovely time getting acquainted over dinner.

After dinner we were called to a conference room at the hotel for the riders’ meeting with the race director and the organizers.  The race director was an Italian who had won the event a couple of years prior.  He spoke only Italian, so after he would finish talking the organizer would translate his remarks into English.  Only English.  The competitors were from all over; Spain, Italy, France, the UK, the Netherlands, Belgium, Germany, Austria, Switzerland, Greece, Norway, and more.  If you didn’t know Italian or English, you were pretty much out of luck.  What made it worse was the race director would expound at length on some topic, going on for five minutes or more, but when the organizer translated, it would be about twenty seconds.

As this went on, the non-Italian competitors began to get more and more upset.  It appeared that there were some European politics going on that I was ignorant about.  About a third of the competitors were Italian, and some of the clubs had been up in this area of the Alps pre-riding the roads for a few weekends prior to the event.  That local knowledge combined with the suspicion that the race director was giving the Italian riders more specific instructions than the rest of us were getting had riders from other nations pretty upset.  By the end of the meeting the room was in an uproar, with some of the Dutch riders shouting, “What aren’t you telling us?  What aren’t you telling us?”

As we filed out to the room my eyes must have looked like saucers!  What had I gotten myself into?  Standing by the door was the team UK captain, Colin, and he pulled me out of line, asking, “What’s your plan for tomorrow?”

I shrugged and said, “Read the roadbook and try to keep up, I guess.”

Colin said, “We are starting on sequential minutes.  I will hold the team outside of the start to wait for you.  If you can keep up, we’ll get you to the checks on your minute.”  Hallelujah!  This would determine my experience for the rest of the week, taken under the wing of the UK team.

The next morning would have us checking out of the hotel, delivering our luggage to the truck, then riding a mile or so to the staging area for the start.  Time for bed.