This week has been extremely trying for me as my favorite thing in the world was almost stolen. That’s right, someone attempted to steal my motorcycle on Monday night in front of my job.

In the past, I’ve written a lot about securing your motorcycle and taking precautions to dissuade thieves from messing with your ride. So, the fact that this happened to me really stings because I take the matter seriously. I do consider myself lucky to still have my bike as the thieves were incompetent and only ended up damaging my motorcycle. 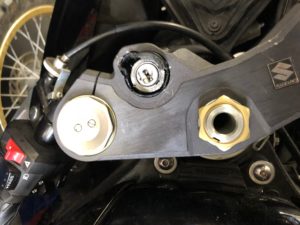 The thieves attempted to pop the ignition switch with a fake master key, but were unsuccessful because the key broke off inside instead. The predators also tried to push the bike despite the wheel lock being attached to the front rotor, so they damaged my rotor and fairing as well because they jammed the lock inside it. 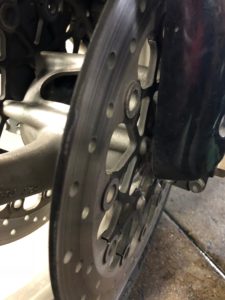 I filed a police report, contacted my insurance company, and my bike is in the shop being repaired, but I’m still feeling the effects of the near theft. I don’t know if what I’m experiencing are the seven stages of grief, but I’ve been having a wide range of emotions. I’ve been swinging back and forth between rage, frustration, a bit of paranoia, and sadness. 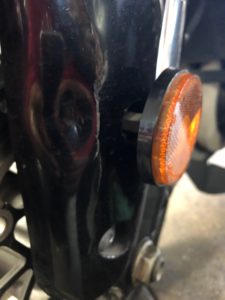 It’s been a roller coaster and the most consistent emotion I’ve been feeling is ‘violated.’ Someone decided they had the right to take something from me that I’d worked very hard to obtain. It pisses me off and makes me feel like my property isn’t safe anywhere.

Moving forward, I’ll be researching new anti-theft products. I’m glad I had my wheel lock on my rotor because it did prevent my bike from being rolled anywhere, but I need to do more. I’ll be looking into finding a device that blares a loud siren when touched. If my bike had an alarm, I feel like the thieves wouldn’t have wanted to stick around since it would’ve drawn attention to them.

I know I can’t blame myself for this as there is a real criminal element in LA  for vehicle theft, but I don’t want to ever feel this way again. I’m going on the offensive, and I’ll be putting forth my best effort keep my ride even safer from now on, because there’s no such thing as a ‘safe neighborhood’ in my eyes anymore. Thieves travel, and nice neighborhoods attract their attention even more so than run down ones.

I’ll keep you all updated on the progress of my bike, and my parting advices is to do everything in your power to protect your motorcycle. If you value it, go the extra mile secure it.