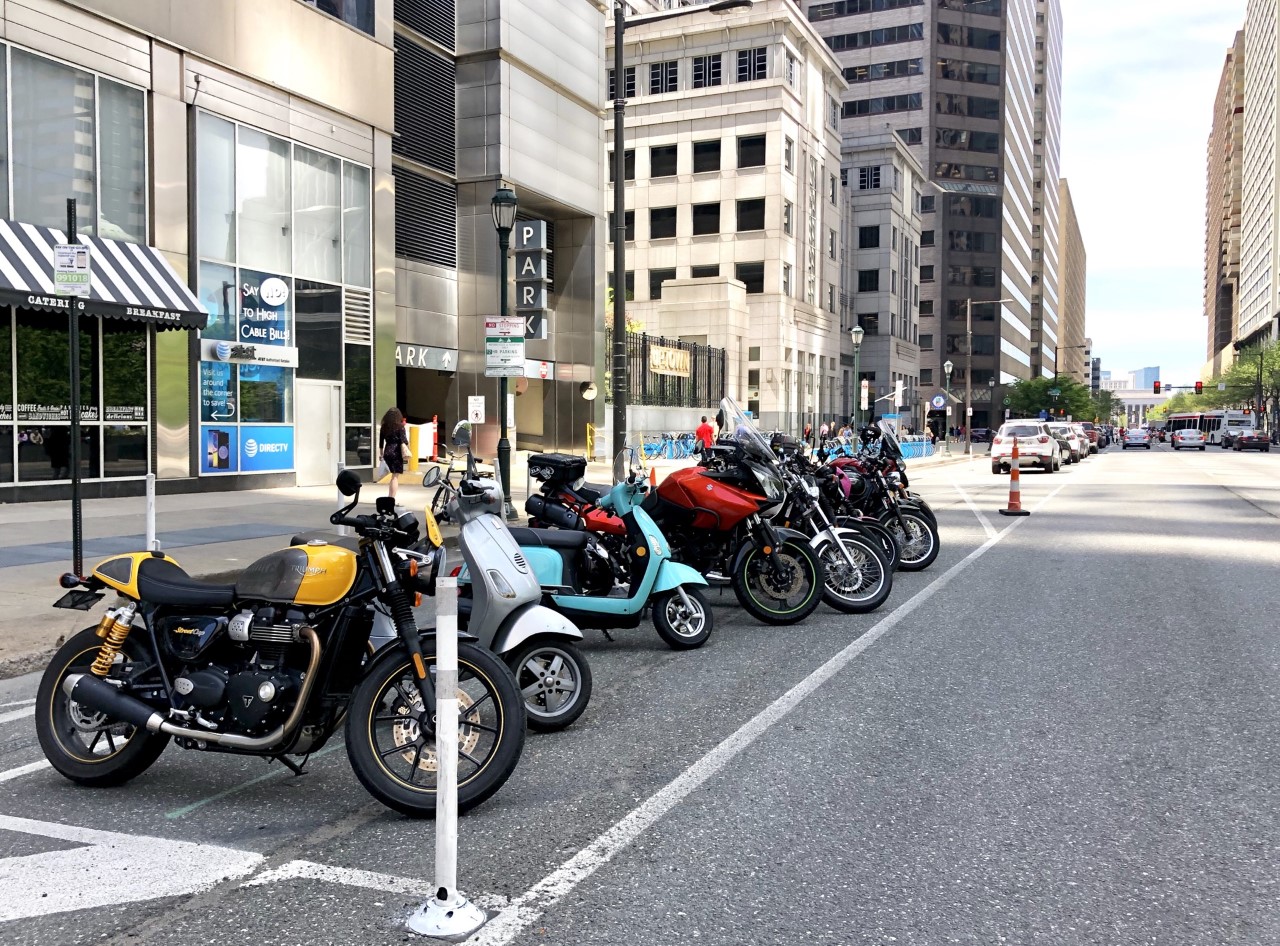 While walking through Center City, Philadelphia for work, I took notice of special parking areas on mains streets filled with Vespas, Triumphs, and Ducatis. I was told that a rush hour drive home of a few miles down Broad Street may take close to an hour in a car, and it appears likely that taking advantage of a scooter may cut that time significantly. From my limited perspective, Philly appears to be a pretty moto-friendly city, especially with the designated motorcycle parking spots on multiple blocks. These “pro-moto” parking efforts are a significant contrast to my home area in downtown Los Angeles, where the few motorcycles seen on a weekday take up space on sidewalks in whatever random open nook or cranny they can fit into. Of course, this practice may not be legal, which means there is  dependency on lenient parking enforcement officers to avoid tickets.

In theory, LA is the perfect place to take advantage of two-wheeled transportation as a regular commute method. Legal lane splitting, moderate year round temperatures, dense traffic through the day – the benefits of using a motorcycle stack up quickly. Even then, a typical morning commuter doesn’t see many moving through the crawl. The carpool lane isn’t always filled, but the primary non-carpool lanes are packed with solo drivers drudging along. It would appear that southern California’s car culture easily trumps all (including public transportation).

BUT, a typical Saturday trip to Neptune’s Net or the Rock Store presents a flood of hundreds of bikes, showcasing all sorts of motos, from the typical GSXR to the unicorn Arch. This is, of course, a small population legal driving age folks, yet it does seem that LA riders have a cage as their primary go-getter and motorcycling is more of a recreation than a serious way to get around.

This makes me wonder is if the city/county’s measures could sway more people away from being car-dependent.

To California’s credit, there are initiatives that are definitely pro-rider. As mentioned earlier, lane-sharing is a great advantage. Coupled with that is a push for motorcycle awareness, asking drivers to be conscious of those that may be making their way through the bumper to bumper madness. On the other hand, updating the carpool lanes on certain freeways to be FasTrak governed is a step in the other direction. This allows single drivers to pay a little extra to avoid the regular lanes. I do not feel that decreases traffic, it just blesses those who are able and willing to pay.

There are other monetary things that would help, like decreasing tax/providing a tax credit or lowering the vehicle license fees on motorcycles . I do want to go back to the parking discussion, though – if certain sections of LA were to mirror Center City’s approach with designated motorcycle parking areas, it would be another small step toward increasing ridership. A couple dozen square feet would go a long way.