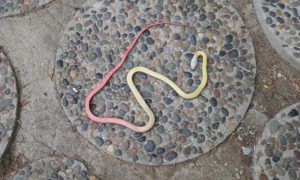 By Barb Graham   We’ve been having a heat wave in Socal lately, along with muggy weather and thunderstorms. It’s a lot like Alabama, only not quite as hot. It’s hot enough to bring out the snakes in San Diego County. They come seeking water or prey in the neighborhood, and Animal Control has already

By Barb Graham   It was billed as “Day in the Dirt.” This Meetup event was hosted by the BMW shop, and some expert dirt riders offered instruction. The plan was to meet at the shop, then proceed down into Borrego Desert and gather at a staging area by the Superstition Mountains. The day was

I’ve always been kind of lucky.  Not “behind an armored car that lost all its money out the back” lucky, but I have had fortunate timing; in part by coincidence, and part observation. So it came to pass that Hootie II, the second iteration of my boxer twin R65, started running rough one morning. I

We’ve been having a heat wave in SoCal lately, along with muggy weather and thunderstorms. It’s a lot like Alabama, only not quite as hot. It’s hot enough to bring out the snakes in San Diego County. They come seeking water or prey in the neighborhood, and Animal Control has already removed a couple of

Every year, comes a time when we must either tune our bikes, or have it done. These days, I prefer to take it to the BMW shop. Laying on the ground trying to work on my bike has become uncomfortable and ache-producing. I made an appointment, and sarcastically asked for a loaner. Sarcastically, because the

“The meeting will now come to order.” “The secretary will now read the minutes of the last meeting.” “Any old business? Any new business?” After the new business is discussed, there are usually snacks and a raffle. By the time the meeting is over, you’ve spent two hours listening to people argue whether they should

One day in 1906, a movie camera was mounted on a trolley in downtown San Francisco. It was a nice day, people out in their Sunday best. The movie shows the chaotic traffic on Market Street, no traffic signals, people running out of the way of Tin Lizzies and trolley cars. Private cars dodge this

It can only take a nanosecond of distraction on a motorcycle for a day to go from fun to tragic.  This isn’t anything one plans for, and the only way to avoid distraction is to be aware that it lurks at the periphery like a Grinch, just waiting for you to screw up. Distraction can

Apparently the Boozefighters who came in later encountered difficulties. One group was profiled by SD County sheriff deputies, who pulled them over for doing the speed limit, held them for a while, then let them go. Another group rode in an hour after us, and the leader said he was unnerved by the sand dunes,

It’s been a while since my accident two years ago. The bike was down for a year as I scrounged for money to buy parts. Then, when it was all back together, I went on a 6 hour ride down into the desert with the BMW shop guys. After that one ride, the bike started

My bike has been down for a long time. After last November’s ‘car turned left in front of me’ incident, I’ve been scraping money together for parts and repairs. The first thing I bought was a new helmet. It has some WIFI dingus. I got it to talk to my phone, so I can play

I bought Hootie 1.0 in 1987, from Sign of the Twins in Mountainview. I took the BART train down from San Francisco (aka ‘the City’) and there was a guy waiting to pick me up in a beautiful R100 with a sidecar. I brought my helmet because I expected to ride something home. After riding