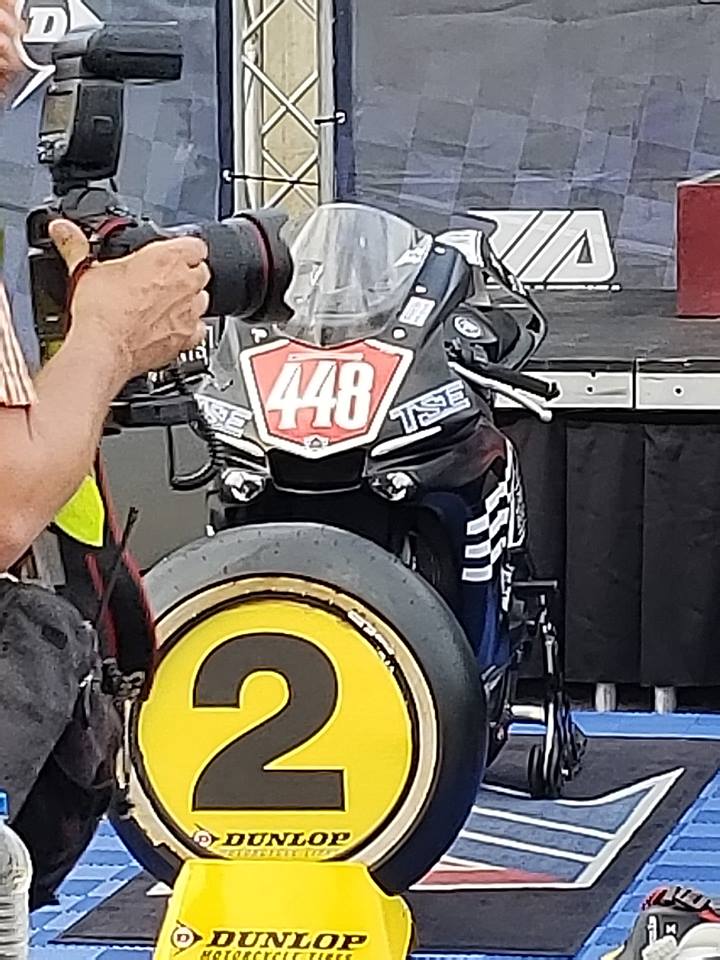 Sometimes in life we are presented with an opportunity we simply can’t pass up. I was provided one such opportunity to accompany a friend to the MotoAmerica races at the famous Barber Motorsports Park outside of Birmingham, Alabama. Naturally, I had to tag along!

For me, the benefits of being able to go were layered. First off, there’s the obvious opportunity to hang out with friends for a weekend and watch them doing what they do. Then there was the chance to see a track outside of California and see what so many of my friends have talked about. Finally, there was the personal reason of being able to see firsthand what goes into a MotoAmerica round for a privateer racer, and a chance to see up close and personal the investment and steps needed to make something like that happen.

I flew down to L.A. to meet the guys so we could all be on the same flights to ensure their schedule could proceed smoothly. The flights were a bit long, but we arrived in Atlanta where we quickly ran into the first issue. Chad, the racer my friend was working with, had lost his driver’s license. While he was eventually able to get through airport security, the rental car company flat out refused to give him a car without it. My friend hadn’t brought his license, either, which left me – luckily for everyone, I had my license and money on a card to cover the rental. Thankfully that was our only big hiccup in travels for the weekend!

After finding a local spot for dinner, we made it to our hotel for the weekend. The guys had most of Friday to work on just finishing touches on the bike, getting through tech, and making sure everyone was on the same page for the weekend. They were pitted with a team that included Caroline Olsen, so I was excited to see how her weekend went as well. I mostly hung out in the pits and wandered through the paddock a bit, saying hi to a few other friends and meeting a few new faces as well. Overall it was a relaxing day, and I looked forward to the practices and races kicking off on Saturday.

That evening we found some dinner at a local Mexican restaurant and enjoyed a meal and a few drinks before heading back for a good night’s sleep.

Saturday morning felt like a pretty relaxed “race morning” to me as the Superstock bikes weren’t on track until later in the morning, so we didn’t have to rush to the track. Coffee and breakfast were obtained, and we drove back to the Park.

If you’ve never been to Barber, I must say, that is a first-class facility. With beautiful roads and landscaping leading in, with some great views of the track, and a number of fun activities for visitors, it is by far the best track I have ever been to from an onlooker’s perspective.

Most of Saturday was spent down in the “hot pits” area where the race teams could easily get on and off track with their bikes, and could hop the pit wall to help a racer who pulled in for an adjustment or other reason. It was interesting to see the pace of the day, and how the teams and various racers all went about their processes of preparing, fixing, responding, and riding. I enjoyed being a part of that and being able to see firsthand how it all happens in a professional race series. 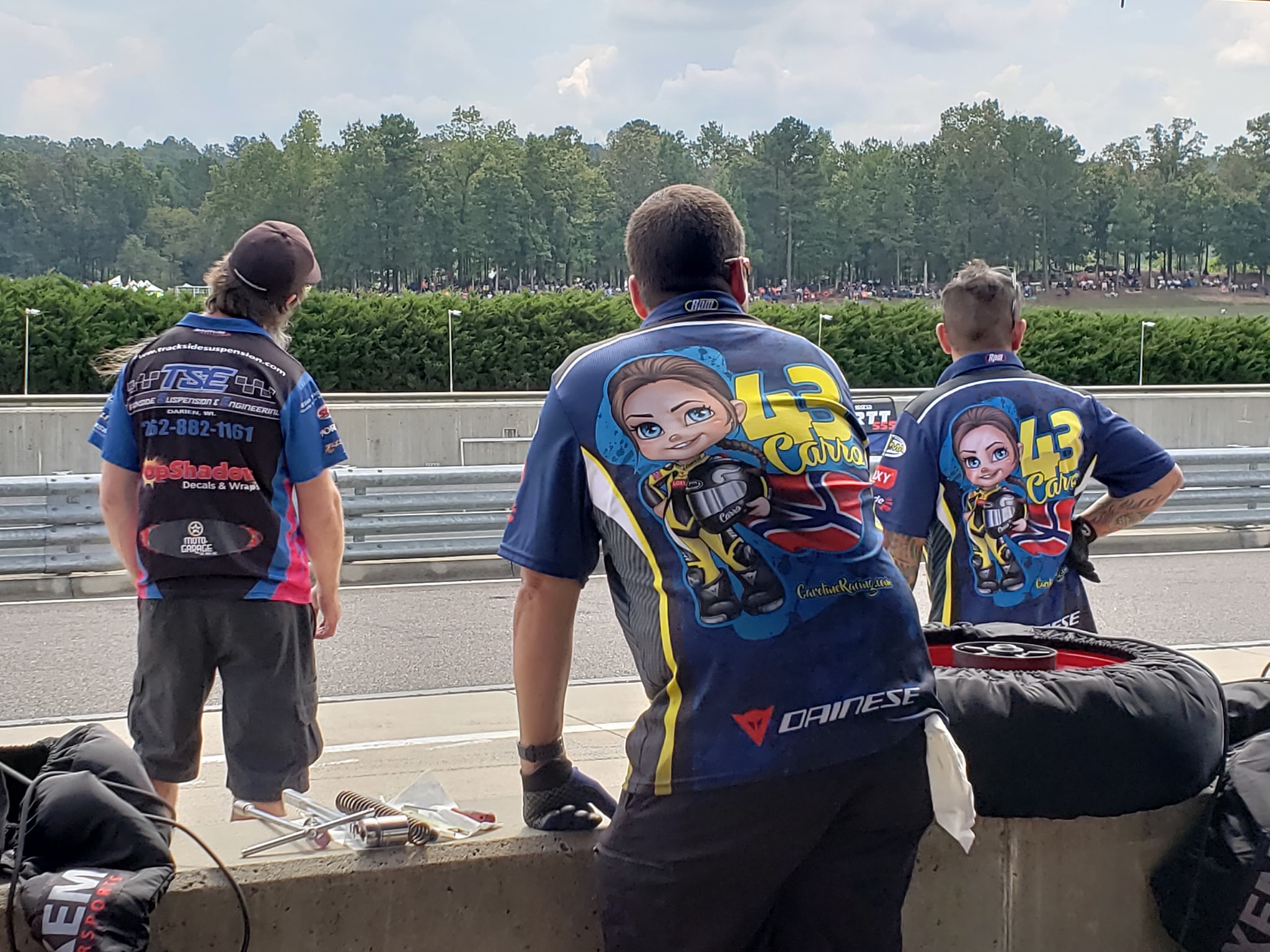 That evening was another night at our Mexican restaurant, and we again enjoyed some great food and company. Another night of rest, and the Superstock racers prepared for their race the following day.

Sunday was another day mostly spent down in the hot pits area. I was enjoying the opportunity to relax over the weekend, and while I had heard that the museum at Barber was phenomenal, I mostly just wanted to relax and watch the races, and help if it was needed. The day of racing was exciting, and the front row seat was pretty special. I even got to join the teams as they went to the wall to cheer Roger Hayden down the front straight the final time before he retires from racing.

Finally, our race was heading out, but due to delays earlier in the day, they were rushing the normal grid routine, which was causing confusion for a number of the teams. Eventually that was sorted, however, and they were off. Chad did quite well in the race, taking home a hard fought second place, and the podium celebration was an affair, even with the last race of the day.

After that, however, it was time for the teams to start packing up, so I pitched in as best I could and helped get things moved and loaded (while also trying not to get in the way of their well-established routines). I also finally had an opportunity to introduce myself to Caroline before she had to go take care of further business.

Once things were loaded and moved where they needed to go, it was time for the three of us to head back. In order to make the morning flights less stressful, we had a hotel near the Atlanta airport, so we made the trek back that way, checking in for the evening and preparing for an early morning departure.

Monday morning dawned, and it was time to head home. The weekend for me was an unforgettable experience – while I spent most of my time hanging in the pits and around the teams, it was still very relaxing, and as a hopeful MotoAmerica racer, I cherished the opportunity to be a part of it without the pressures of also trying to race.

If you ever have the chance to be a part of a pro motorcycle race, I highly encourage it, especially if you are a racer yourself. It is very interesting to see how the pro races work compared to the amateur races. If you are simply a motorsports enthusiast, make an effort to go see the local to you races, both the professional ones, but also the amateur ones. Many of the local racing clubs still feature top riders in the nation, and let’s face it – motorcycle racing is one of the most exciting motorsports out there, and deserves your support!