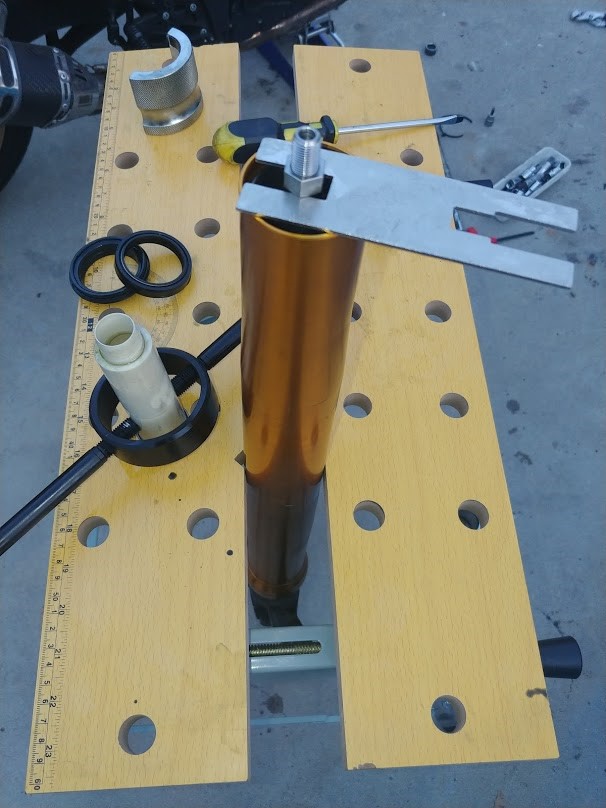 It’s finally time. After seemingly endless minutes of waiting, my Amazon orders have finally arrived, my calendar is clear, and my boss thinks I’m sick. In other words, it’s time to get dirty.

First up is a set of Vortex rearsets.  I know, I know, this is supposed to be a commuter bike, but hear me out – the factory rearsets have rubber mounts, and they wobble. Yes I am aware of how  whiny I sound right now. There are children starving in Africa, but all I care about is wobbly rearsets. Redemption is nigh however – there is a second reason that I bought the rearsets, which far outweighs the wobbliness.

Okay, I’m kidding. I actually bought them because the factory rearsets had virtually zero adjustments. All of my bikes have a reverse shift lever for racing applications, and I’ve grown so used to it over the years that now I prefer it. The added adjusts are nice to have too.

Next on the list was a set of air block-off plates and a fresh air filter. Outside of a dead squirrel carcass in the airbox, this was pretty uneventful.

Since I’m working near the front of the bike, I might as well rebuild those fork seals too – this is a first for me, but thanks to a few useful YouTube videos, and some advice from Dave Moss, I was able to at least get the forks back together in a seemingly acceptable state.

Then on to a set of sprockets and a speedo-healer. If I’m honest, the bike has plenty of power, but it’s a bit lacking at lower RPM. I don’t have much need for a bike that can do 150+mph, so a few sprockets will bump my low end torque pretty substantially, and the speedo-healer will make sure that my speedometer and odometer aren’t reading incorrectly.  If you’re wondering, I actually bought a few different sprockets, 2 different sizes for the front, and 2 different sizes for the rear. I’m gonna have to play around with them a bit to figure out what combination I like the most.

Lastly came a collection of small comfort mods:  90 degree valve stems installed with a fresh set of Dunlop Q3+ tires gives me plenty of traction and ease of access.  Bar warmers hidden under new grips is a double-whammy for comfort and control. Stomp Grip pads and a new tank protector replace the old crumbling TechSpec stuff that had probably been there since 2008. The new double-bubble windscreen is pretty generic, but it makes long distance riding more tolerable,and a few bits of Ebay bling here and there to give the bike some subtle pop. A ram-mount x-grip with integrated wireless charger makes sure my phone is charged every time I take a ride, and a new set of smaller mirrors makes lanesplitting much easier.

Topping the event off was a heavy detail – the whole bike got washed, the paint got a full claybar/polish/buff/wax treatment, and the chain saw some lube for the first time in at least 3 months.  It was time for the maiden (or well, post mid-life crisis) voyage.