So now that I had these side projects partially completed, it was time to see if I could fit both fans. After a fair bit of wiggling and wrangling I determined that was not going to happen. That meant it was removing the stock fan and figuring out how best to mount this aftermarket fan. Trial and error, a few zip ties, and some creative wrangling, and I had it in place, off the headers, and neatly sitting where I needed it.

I found a company that makes a “plug-and-play” switch that will still turn the fan on with OEM settings automatically, but also gives me the option to turn the fan on manually. Perfect, especially since I only had the one fan, so I ordered that, but it was coming from Europe so would be a bit before it arrived. Engage waiting (im)patiently for your spent money to materialize into something you can hold.

In the meantime, I needed to corner my tuner to discuss the ECU, since with my removal of a number of parts, it was going to be essential for me to get it changed so the bike wouldn’t throw codes and go into limp mode. I also wanted to look into a different map – they had tuned the bike for a lot of low end power, and while there was plenty of oomph (considering the bike still had full stock exhaust), but in order to get that out of a bike still sporting a catalytic converter and stock can, well, the tune was doing nothing for gas mileage or my running temps.

With fans mounted, wires routed, reassembly commenced. This is never particularly enjoyable, and generally my goal is to ensure my bike doesn’t lose any unplanned weight. If the “bits bins” are empty of all bolts, nuts, washers, and random other “bits,” and I’m looking at a fully assembled bike, I consider it a small triumph of woman-kind, especially when dealing with OEM fairings.

Unfortunately for me, in the world that is racing, Viserion (my race bike) developed a need to borrow a few parts (namely front rotors) off my street bike. Racing incidents and all that…so Ryuk had to be relegated to being a garage queen a bit longer until either race season was over, or I could swing new race rotors. In typical racer fashion, I’m making it to the last race round on the last available credit and floating a few bills, so buying $600+ rotors wasn’t going to happen, especially after everything that was finally dying on my race bike and needed replacement – things like my exhaust can (which finally completely blew out the entire side with a gaping crack the size of the grand canyon) and brake pads (maybe if I didn’t replace those I’d go faster?). 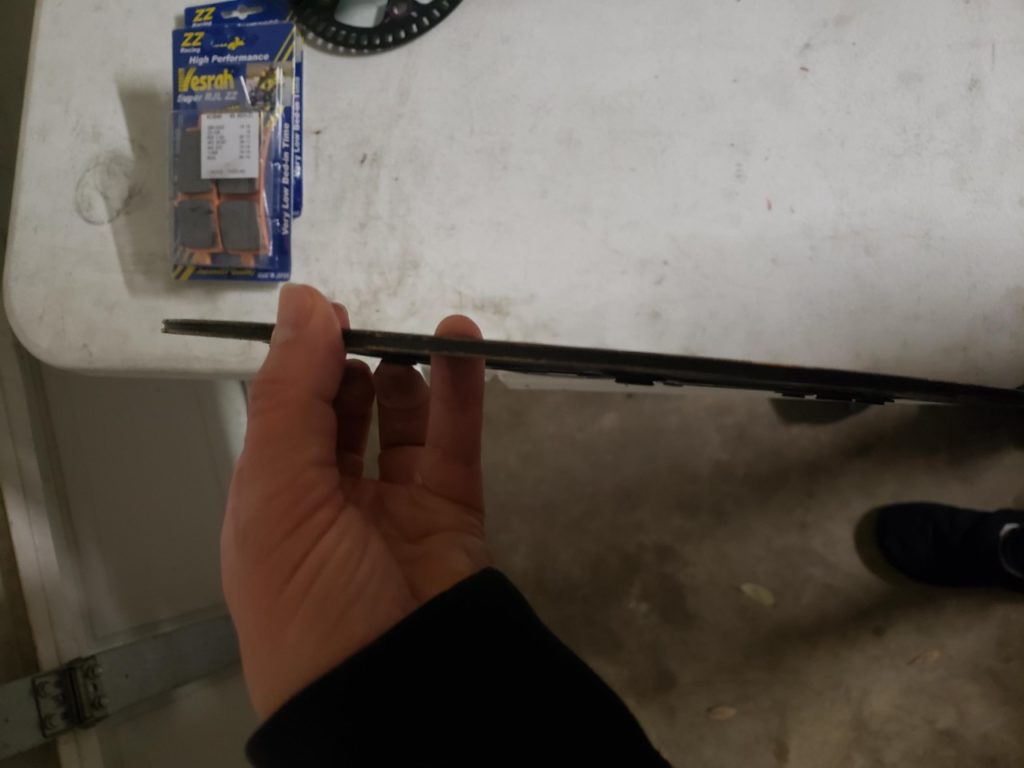 These tend to work better if they are straight….