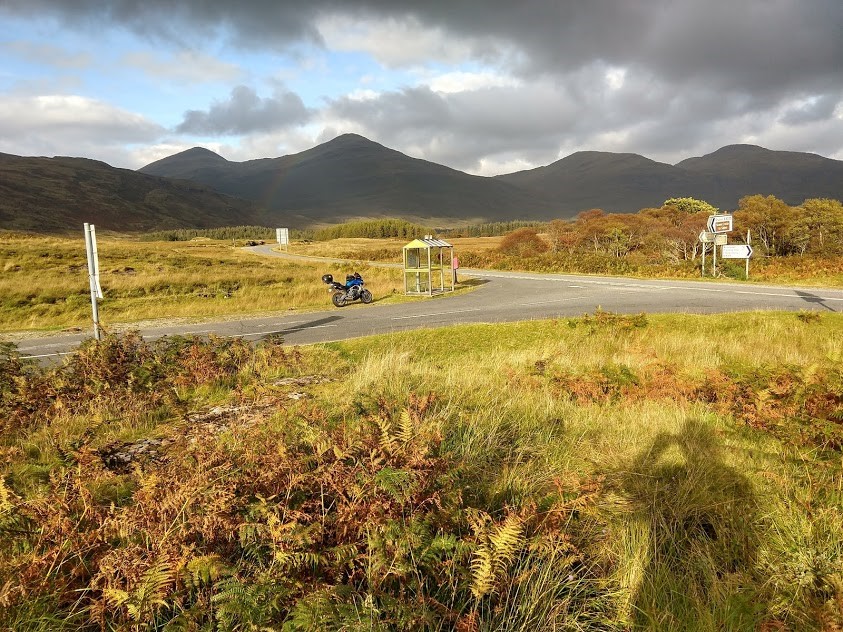 No, this isn’t one of those hand-wringing pieces saying that if you go on a group ride, you will surely die.  Yes, I love riding with one or more other riders.  As the saying goes; trouble shared is trouble halved, and happiness shared is happiness doubled.  Most of my best and most memorable rides were with my friends.  That said, there is a special kind of magic that is most likely to be experienced when you go on a ride – particularly a big ride to an unfamiliar place – by yourself.

I’ve just returned home from a ride that prompted this post.  I was over in the UK, where I ride almost every year.  This year, I arranged the timing of the trip around the date of a friend’s wedding and built from there.  A big part of the planning was driven by a desire to ride in Scotland.  My bike and most of my UK riding friends are based in Yorkshire, and I have ridden in Scotland before, but only as far north as the region known as the Scottish Borders.  This year I wanted to get up into the Highlands and out to the Hebrides, and this trip offered the chance to do both, but only by myself.

A couple of my UK riding mates were able to join me on day 1 on our ride up to Moffat, and another met me at Moffat on my way back into England, but other than that, all the northerly stuff was solo.  With that, what follows is an explanation of why it’s useful to ride solo, and an accounting of some of my experiences that may not have happened had I been with other riders at the time.

Why ride solo?  If you are by yourself, as self-reliant as you may be, there is still a possibility of encountering an issue you can’t resolve by yourself.  Whether it’s getting lost because of incomplete maps or road construction, or having a mechanical problem you can’t fix, or maybe you encounter weather that is too much for your gear.  These are all times when you need to get outside of yourself and deal with the locals for your trip to continue.  This is an opportunity.

Similarly, when it’s just you, all by yourself, stopped by the side of the road taking a picture, or wandering around in a city center looking for a place to park, or just walking down the street with your riding gear on, you become an object of curiosity, maybe even of concern for the locals.  If you were with a group, or even just one other rider, the locals will likely think you have it covered, and they will be reluctant to approach you.  Solo, you are not a threat, you are someone who may be in need of help that they may be in a position to provide.

On this recent trip, I wandered up the high street (UK for main street) in the Scottish city of Fort William wearing my riding gear, looking for a grocery store.  Passing a sculpture commemorating a local who drove a Model T to the top of Ben Nevis, there was a group of about a half dozen riders from Northern Ireland who engaged me in conversation.  When they found out that I am a fan of the late, great Joey Dunlop, it was like I was their long-lost kinsman.  When I brought up Peter Hickman and his record speeds at both the TT and Ulster GP, we could have been blood brothers.  All because my status as a solo rider encouraged them to engage me.

In addition to the moto gear, I was wearing a ball cap from my alma mater (University of Washington), and while in the grocery store, I heard someone shout, “Go Dawgs!”, the cheer of Husky supporters.  It was a group from Snohomish, Washington, not far from were I used to live.  Had I been with others, it’s unlikely they would have been emboldened to speak with me.

The next day, I fled Fort William because a huge storm had blown into the north end of Scotland, and I didn’t have any lodging booked.  It seemed like the best thing was to flee to better weather.  On my way back south and east I was passing through a small village called Dalwhinnie.  At this point in the trip, I was cold and wet, and when I saw that the local community hall is open on weekends selling tea, coffee, and cakes, it seemed like the perfect excuse.  After all, when would I be back?

Walking in, I was the only customer, and the local guy running the operation was pleased to have any business, and even more pleased with having a foreign motorcyclist.  As I warmed myself over a few cups of coffee, he regaled me with stories of the local area and its history, we talked Brexit and how it is tearing apart the UK, how politics have realigned after the Scottish independence referendum, and how unconvincing David Cameron’s posturing has been about his role in initiating the whole mess.  Had I been in a group, we would have been self-contained, it’s unlikely that conversation would have happened.

Later that same day, I had fled south to Dundee to get out of the weather.  While there I stopped in a Tesco Extra to try find a replacement adapter plug to allow me to connect my US devices to UK wall sockets, since I had broken mine the night before  The clerk couldn’t find one, but went above and beyond the call to help me find a local shop that had such an adapter in stock.  Would I have asked for help had I been with others?  Maybe.  Would she have gone the extra step if I had been with others?  Maybe.  However, I was alone, and she did everything she could to help.

The list of these experiences could go on and on, so I’ll share just one more.  I was out on the Isle of Mull in the Hebrides, where I was based for a couple of nights while I explored the local sights.  Mull is pretty sparsely populated, and there aren’t many places to eat away from the town of Craignure.  The owner of the B&B where I was staying had told me that I could get a meal at the pub in the nearest village, so I rode over there to check it out.  As I pulled into the parking lot, I saw a man and woman sitting in front of the pub, and the guy gave me a thumbs-up.  They were sitting at a table near the entrance, and asked me where I was from (a foreign license plate can be a real gift sometimes), and when I said California he asked if he could buy me a pint.  This led to an extensive conversation over the course of two days.

Paul is a musician from Edinburgh, and formerly owned a business in Berlin restoring old Indian motorcycles.  Emma owns a yoga studio in Edinburgh and she wants to learn to ride.  To top it off in a way that became increasingly significant over the course of our time together, she’s a direct descendant of Robert the Bruce (Google him).  We ended up having a long and intricate conversation addressing many things from bikes and riders (including Gary Jones and Austin Vince) to art, music, religion, and history.  Paul and I are now planning to ride the Stella Alpina together in 2021.  We grew incredibly close in a short period, sharing meals, beers, and even some scotch, getting acquainted with other locals too.  Would this have happened if I were in a group?  I am quite sure it would not have.

All of these experiences happened because I was at the mercy of the elements and circumstances, and because the locals felt that they could approach me, and in some cases seemed to feel honor-bound to do so.  If you read the stories of many long-distance adventure riders, whether it’s Ted Simon or Lois Pryce, you will see that these experiences are integral to the solo riding experience.  What’s more, these often become the most important memories of the trip, and they can never be planned, you just have to make room for them to happen, then relax.

I love riding with my friends and will do so any chance I get.  But, when I have the chance, particularly when riding somewhere way outside of my comfort zone, I will go solo.  You might try it too.