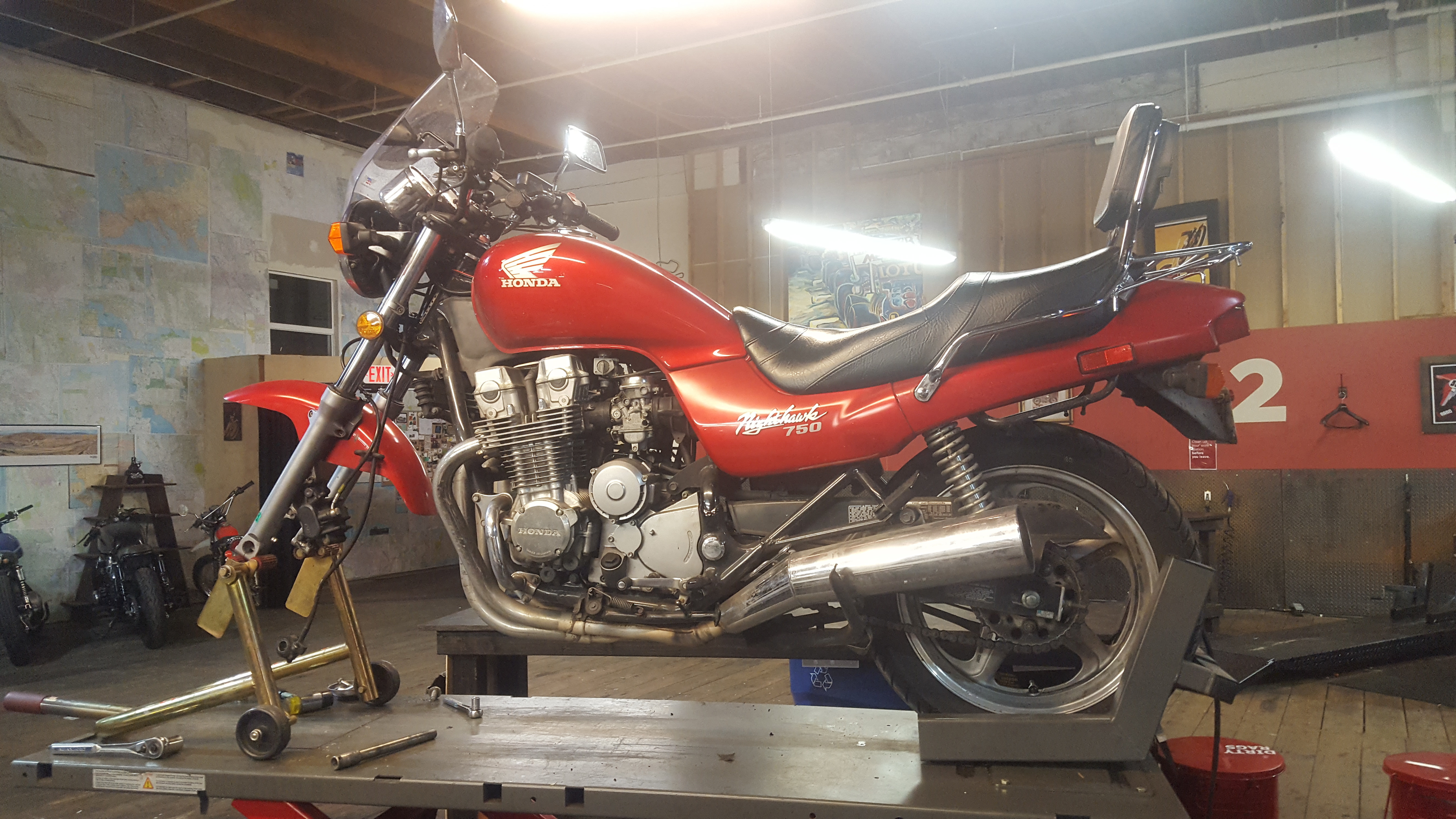 So as you can tell by the title, I changed my tires recently!  In a previous post I mentioned that I was running a set of mismatched Dunlops (Sportmax GPR 300 in the rear and a Roadsmart 3 in the front), and I’d need a new set soon.  The Nighthawk 750 has some weird rim sizes which limit tire options, and I guess the shop that did my last tire change just threw on whichever ones they had laying around.  They were fine, although I’ve always been bothered that the bike didn’t wear a matching set.  More importantly though, the GPR 300 was completely toast.  After a little googling, I settled on the venerable Bridgestone Battlax BT-45.  Other front runners included the Pirelli Sport Demon and the Avons that were on the bike when I originally bought it, but the Bridgestone had a long list of glowing reviews and it’s tough to argue with that.

Since I had never changed my own tires before, I booked a spot in the tire change workshop offered by Moto Guild SF.  Workshops are capped at three students maximum with at least one instructor, in this case Wilder, who was joined by none other than “Fish” from CityBike.  My Nighthawk was joined by a gorgeous KTM 1290, and a seriously badass Honda CB500X ADV build.  For the tire change workshop you can select one of several wheel removal options.  Since I’d be riding there and had never removed my wheels before, I selected the option for two wheels on the bike, as did my classmate with the KTM, whereas our colleague with the adventure build brought with him two brand new spoked tubeless rims off the bike.  After we raised the bikes, I tapped out my rear axle and lugged my wheel to the pneumatic tire changer for the demonstration. 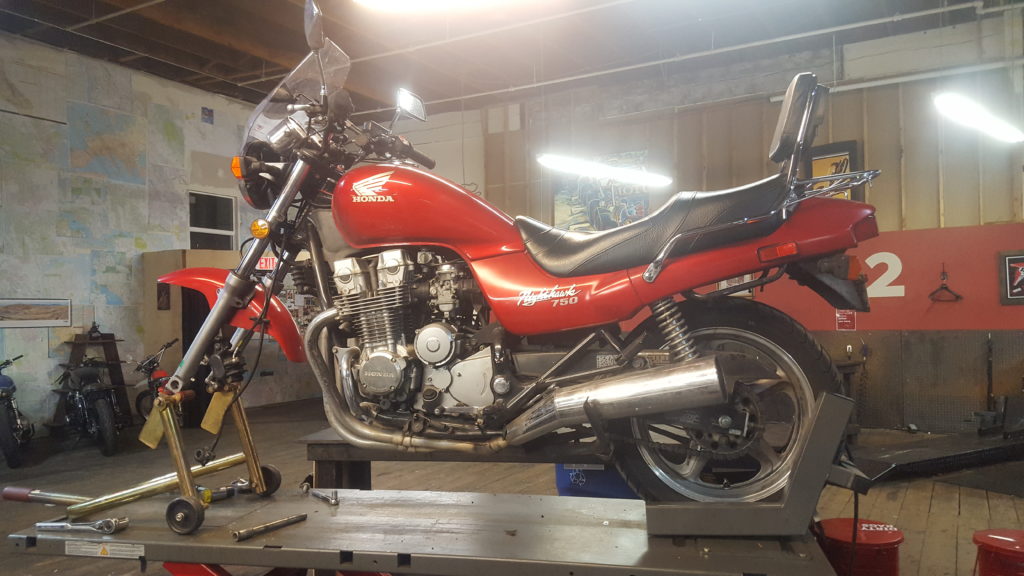 Do you even lift, bro?  This part always makes me feel like an expert

The process of removing the old tire from the rim and fitting the new one was aided by the pneumatic tire changer, a slick multi-function rig that makes several steps of replacing tires almost completely effortless.  The first is a bead breaker – a hydraulic lever arm with a broad flat tooth at the end.  A tire is placed upright by the side of the machine and a foot pedal is pressed, which brings the tooth down on the sidewall of the tire and pops it off the bead.  Once that’s repeated a few times around the rim on each side, the tire can be clamped down onto the rotating table.  This was the part I had the most trouble with; it took me a few tries to get the machine to clamp happily onto the rim.  Once the rim is in place, it’s only a matter of lowering another arm into place, this one with a strangely shaped head called a “duck,” which is shaped to dig under the tire and lift it off the rim as the rim is rotated underneath it.  That process is then repeated to lift up the lower side of the tire.  Once the old tire is off, a new one gets slipped over the rim using the duck.  The new tire is inflated to pop it onto the beads, and the wheel is balanced and fitted back onto its axle.  I also took the opportunity to replace my valve stems with new 90° stems to avoid interference between my tire pressure gauge and chunky housing of the Nighthawk’s rear drum brake. 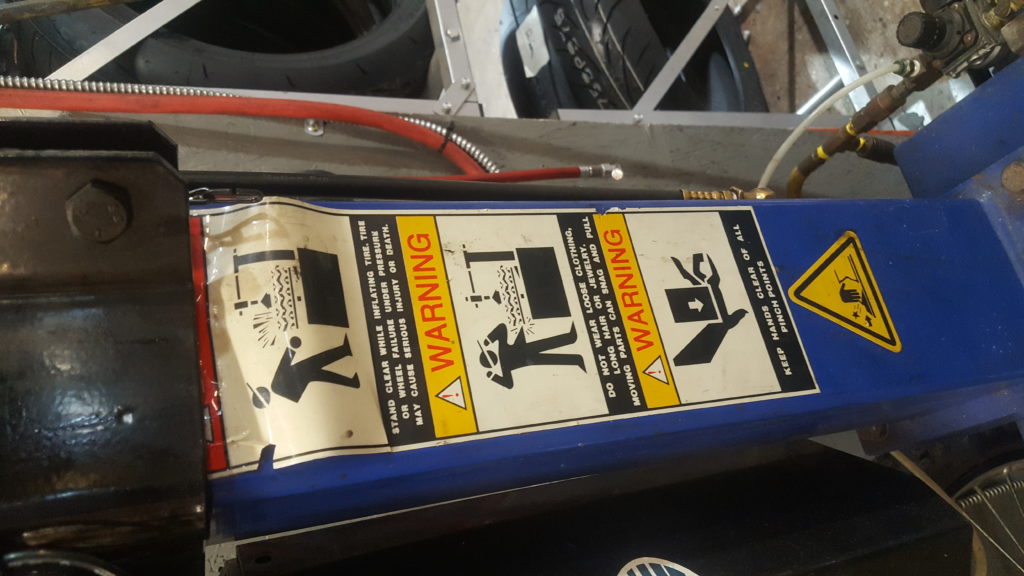 One nightmare of a triptych. 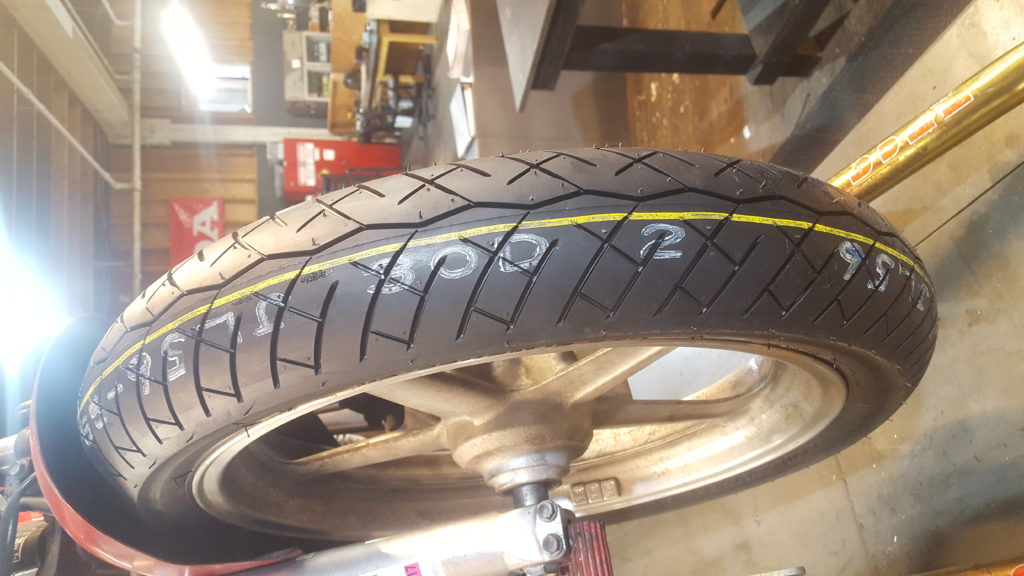 Overall, the process was much easier than I expected!  I was most worried about two things – getting the wheels off the bike and having an appendage eaten by the ornery-looking tire machine.  Thankfully the wheels were straightforward to take off and put back on, and I still have all four limbs and ten fingers!  The class was a lot of fun and saved me the worry of being unsure if I was doing it correctly.  I’d highly recommend the class for newer riders such as myself, as well as more advanced riders who might just be looking to save some money on their annual maintenance – pretty much anyone who doesn’t already know how to change a tire! 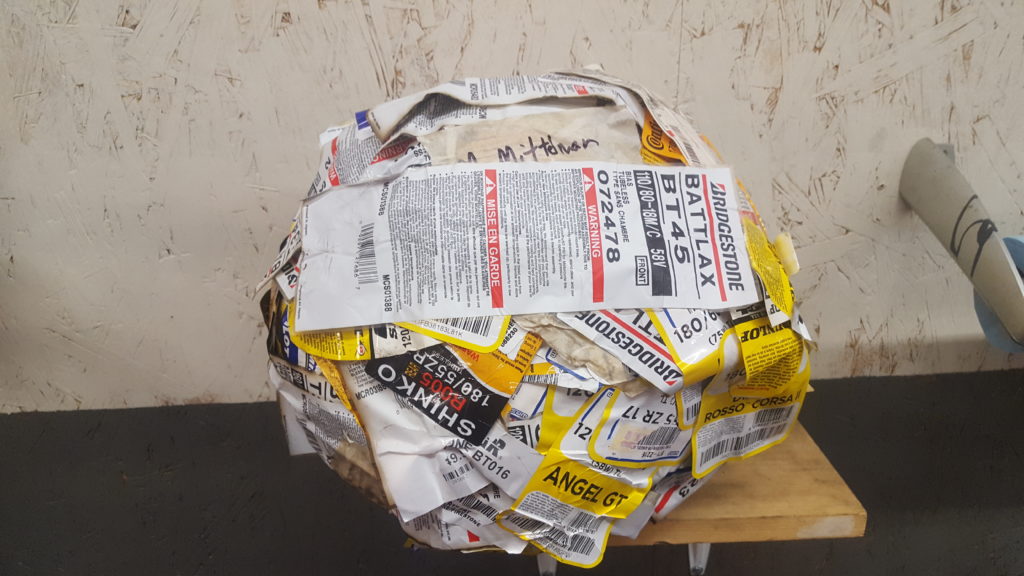 And I had a ball!