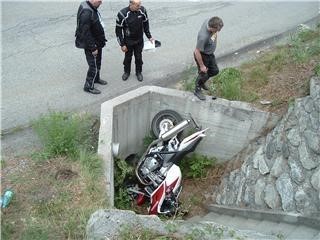 Day 4 had arrived, and not a moment too soon.  All the competitors, and many of the bikes looked somewhat worse for wear.  My bike was rashed up and filthy, and several bikes were showing a creative use of duct tape to keep their bodywork together.  A few others were unable to continue, dropping out of competition.

We headed out into the day for the last time, just the four of us, determined to make the finish.  We knew that being marked as “finishers” was the best we could hope for after the debacle that was day 3.  Today had to be better. 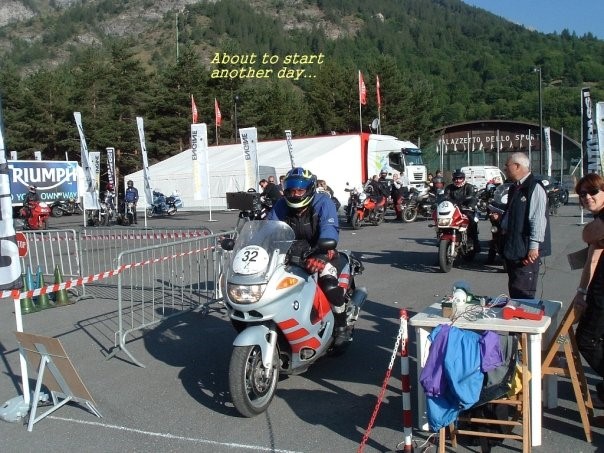 The morning’s route took us out of Bardonecchia via the same pass with the water bars that are used to keep spring runoff from destroying the road cut right into the road surface that we had ridden late on day 1.  Going up and knowing what was coming made them much more fun.  It was not the last time we would see water bars on the road this day.

We again climbed up the Col du Lauteret, but instead of climbing higher up Galibier, we continued down the other side until the roadbook sent us up to a little village at the base of the Col de la Sarenne.  I had never heard of this pass, and once we got on it, the reason for its obscurity became clear.  The roadbook warned that it was a very technical road, and it suggested a maximum speed of 20 KPH (about 12.5 MPH)!  The road was narrow and rough with huge exposures (even by the standards of backroads in the Alps), but the key defining feature of the road were the water bars.  Unlike the ones on the road out of Bardonecchia, these weren’t smooth channels paved in asphalt.  No, these were made of huge cobblestones that the French call pave’, and they were deep.  So deep, that as you approached them you could not see the bottom until you were perched right on the edge.  They were rough, with broken cobbles and some mud holes in the bottom.  This was today’s warm up.

Once we broke out on top, we came into a huge ski resort area filled with posh hotels and condos.  After that climb we felt we needed a break for coffee and stopped in at one of those posh hotels.  Looking around inside the hotel, there were photos of the French women’s ski team from the early 70’s when they dominated the world of alpine ski racing.  When I asked about the photos, the woman who was waiting on us said that she was on the team, and that this was her family’s hotel.  Yes, I was starstruck!  They were unbeatable in that era.

After coffee, we continued to the legendary Alpe d’Huez, perhaps the most famous climb in Tour de France history.  That year’s tour had a stage finish there the night before, and many of the spectators were still camping on the side of the road, either nursing hangovers, or doing their best to remedy them with some hair of the dog.  Descending this road was a thrill, with its 21 hairpin turns, and 8% average gradient combined with smooth pavement making it a delight.

When we got to the bottom, Colin pulled us over because he had not gotten the rest of the route into his GPS.  Colin and Dom worked hard to make that happen, while David and I chatted with some bike racing fans about the stage the day before.  Maybe we should have helped because day 4 became another day of getting lost.

Once things got sorted, we headed on to another legend, the Col de la Croix de Fer, which is a beautiful and open pass that also is a regular part of the Tour de France, with the riders’ names painted all over it.  When we got to a village where many of our competitors were eating, the local café was maxed out, so we continued without stopping for lunch, heading for our next treat of the day, the Col du Mollard.

This was another one I hadn’t heard of before.  It was a tiny road, like Sarenne, but smoother and less exposed.  Most of it was below the tree line, but it had more hairpins than Sarenne and Alpe d’Huez combined – 40 of them!  This road became a laugh riot!  Hard on the gas down the straights, followed by throwing out the anchor to get slowed for the next hairpin, railing around that, and repeat.  40 times.

At the bottom, Colin being Colin, got us turned around, riding through the playground of a local elementary school before crossing through a culvert beneath a railroad grade to get back on the highway.  Never a dull moment with these guys!

Colin pulled us over to stop at a café in the nearest town to get some lunch, and to get some more of the route into the GPS.  At this point we figured we were behind schedule, but it didn’t really matter.  Well, I was still a little unhappy that we weren’t doing better, but in reality, that ship had sailed the day before, and I needed to chill out.

Riding again, we headed up out of the valley into another ski area with chairlifts overhead, and meadows full of grazing cattle and goats where there would be skiers in the winter.  Working our way down through the switchbacks on these slopes, we encountered something else that is typical of the area, but a little surprising to me.

In the summertime these ski slopes are used by farmers for grazing and for harvesting hay.  However, the grades are too steep to actually get a mower or a baler into the fields.  The locals work around this impediment by cutting the hay with scythes, then after it has dried, they raked it down on the road to a stationary baler.  Pretty old school, huh?

Here’s where things got interesting.  Apparently there had been some close calls between the farmer and some of our competitors because the bailer was located just around a blind, left-hand hairpin.  As we approached, the farmer popped out from around the corner, waving his arms and shouting to warn us.  David was just in front of me, and as he was trying to figure out what was going on, he let his line drift to the right edge of the road where there was a deep, paved gutter that caught his front wheel.  Unable to steer out of the gutter, he tried to get the bike stopped before the gutter reached its destination, a large water catchment concrete vault.  I don’t know how fast David was going (not terribly fast, we were in second gear) when the front wheel hit the side of the vault, but it was fast enough that both David and his bike were catapulted into the air over the vault.

The bike executed a perfect front one and a half in layout position with a half twist, dropping straight down the open top of the vault.  David was flung clear of the vault, landing flat on his back on the edge of the road.  So much better than going down the vault with the bike!  I stopped my bike just past him and hopped off.  The farmer came running to us, with his wife screaming in the background.  David was motionless, and his eyes were closed.  The farmer was trying to unstrap David’s helmet as I yelled, “Non, arret!”  (that’s approximately 20% of my total French vocabulary) Just then, David’s eyes fluttered open.  I asked him to not move while we figured out where it hurt.

The other guys were arriving, and David felt ready to sit up, which helped calm down all of us, especially the farmer’s wife.  Nothing seemed broken, and David’s gear was intact, so after he caught his breath, the next step was to check out the bike.

The bike was definitely bent, with the forks pushed back towards the engine.  Even if that hadn’t been the case, the bike was too heavy, and the vault too deep for us to get it back up to the road surface.  David was done.

The next thing to do was to call the organizers to get some help.  It turned out that isolated thunderstorms had been rattling around the peaks again, and that, combined with tired competitors, had resulted in a quite a few crashed bikes.  Once the organizers were satisfied that no ambulance was required, they told us that we should expect a two hour wait.  We jointly decided that we had ridden together, and we would finish together, and we sat down to wait for the rescue van.  The unexpected upside of this choice was the friendliness and hospitality of the locals.  We certainly disrupted their day, but they were keen to make sure we had whatever we needed while we waited.

Eventually the rescue van arrived and saw there was no way to get the bike out of the vault without a winch.  A tow truck would be another hour or two, so David climbed into the van for the ride back to Bardonecchia, and the rest of us followed on our bikes.

Our return to race HQ was pretty subdued.  We were happy to be – mostly – intact, and sad that things ended as they had.  David was scored as a DNF.  The rest of us were scored as unclassified finishers, meaning that we had dropped maximum points, but were still running at the end, so there was some pride in that.

At the awards banquet, the individual championship was taken by one of the Italians.  The team championship was taken by his team.  The home team had definitely prevailed.  We drank and toasted and danced at the awards ceremony.  We exchanged emails and phone numbers with one another and all our other new friends, and then dragged ourselves back to bed because we had to check out in the morning.

When morning came, my UK teammates managed to put David on the passenger seat of Colin’s BMW, and to attach his luggage to Dom’s bike, and the three of them headed for Calais and home.  My TDM needed some love before I could head back to Nice.  Between the crash and loads of rough roads, the saddlebag mounts had rattled themselves to pieces.  A local fabricator put it all right in about an hour, and only charged twenty euros for his service.  By late morning, I was on my way to the highest route in the Alps, the Cime de la Bonette, and then on to Nice to pick up my wife.