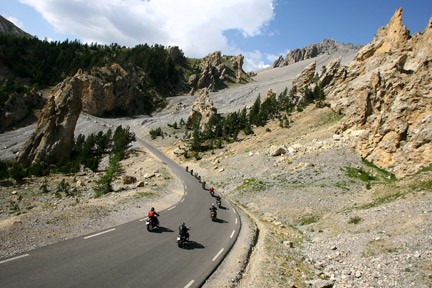 The evening of day 1 provided its own excitement.  We joined our fellow competitors for a beer and dinner, and lots of bench racing.  There was excited talk and animated hand gestures describing the highlights of the day around the table.  Comparing notes on where riders took wrong turns and how they caught back up, overtakes made, silly moments, and all the other stuff motorcyclists talk about after an epic day.  We also heard about some drama in the tourist class, including riders who had not yet made it into the overnight town of Bardonecchia.

The organizers had our rooms sorted out, and our luggage delivered to them.  There was time in the summer evening to go out and perform some minor maintenance on the bikes, and to enjoy the views of the high peaks surrounding the ski resort where we were staying.

Before bedtime, a thunderstorm brewed up, lighting the countryside and rattling the windows.  This would be a repeating theme.

Morning came brisk and early.  Rather than starting the event at 10 AM, for today and the rest of the event we would be rolling out at 8 AM, making my start time 8:34 AM.  The shade of the valley made this the coolest part of what would become a very warm day.  Breakfast was shoveled down hastily, and we made our way to the bikes to get ready to head out.  As in day 1, my new friends from Team UK were waiting for me outside of the start.

The first half hour of riding was pretty relaxed.  We were working our way through a fairly complex set of directions to get to the base of the first really big pass of the day, and just focused on not getting lost.  This morning gave me new insight into the mindset of the Italian driver.  Heading over a low pass, we came around an Italian family in a 4WD Fiat Panda.  The Panda is smaller than a Ford Fiesta, with even less power, and we all rolled by them with ease on the way up the pass.  The way down gave the Fiat a new lease on life as he now had gravity assist!  Following my group down the hill through a left-hand sweeper, I caught a flash out of the corner of my eye.  Turning my head, I saw the left front fender of the Fiat less than a foot from my bike’s right passenger footpeg.  The Fiat was trying to take me on the outside!  I was worried that I had not had enough coffee at breakfast, but I needn’t have because the Fiat driver provided the necessary shot of adrenaline that kept me wide awake the rest of the morning.

When we got to the base of our first big pass, the Colle delle Finestre, there was a crowd.  Many of the competitors had made navigation errors on the way to the pass, so instead of being well spread out, with one minute gaps between competitors, it seemed like the whole field had bunched up just as we arrived at the base of this very technical, single-lane, unpaved pass.  This led to all kinds of sketchiness as the riders who had gotten lost tried to get back on schedule and came carving through other riders who were just trying to keep the shiny side up.

Our timekeeping showed us a bit ahead of schedule, so we took a break at the top to let the crowd clear out before we continued.  This was a good opportunity to get a shot of my new teammates, Dominic, David, and Colin.  These guys are the best!

Now that we had been riding together for more than a day, we began to settle into a rhythm; Colin in front setting a smooth, quick, and tidy pace, with David not far behind.  Dominic rode the third spot and did a great job of keeping his big BMW hustling through the narrow and technical roads.  I sat in the last position, with all that entails.  Every time there was an interruption in our flow as a group, usually due to traffic, I was at risk of getting scraped off the back.  When that happened, it was important to catch back on before any turns on the route because if I lost these guys, I would be screwed.  Nothing like motivation to get me to twist the loud handle!  Colin was quick, and to stay with the group, I would need to be quicker.

This experience began to change the way I rode.  Colin’s elegant line selection and his remarkable ability to read the road made it easier for all of us to carry good speed without incurring needless risk, but when the group got ahead of me I could no longer depend upon Colin’s line, and had to choose my own to catch back up.  It was like a master class in riding unfamiliar roads.  It also changed the way I managed gear selection, keeping the TDM in the upper half of the rev range as much as possible to maximize acceleration coming out of turns.  It became clear to me that my normal way of riding back home was far too lazy for the kind of riding demanded in this place.  This all required intense focus, while trying to remain calm, repeating to myself, “Breathe, Kurt, you have to breathe.”

One of the great pleasures of riding with these guys is that both Colin and David had ridden extensively in the Alps before.  Both knew the area, and had a workable knowledge of local food, customs, and language, and were able to pick restaurants, suggest lunch options, and help me navigate local gas stations.  This day was my introduction to a staple French lunch, the croque monsieur, the exquisite French version of ham and cheese on toast.  Try one!

In the afternoon we were back in France and crossing the route of the previous day’s stage of the Tour de France.  Being a great fan of bicycle racing, this was like visiting Fenway Park or any other legendary sporting venue, seeing the names of favorite riders painted on incredibly steep roads, confirming my impression of these bike racers as incredible athletes.

This afternoon also was my introduction to one of my favorites of all alpine passes, the Col d’Izoard.  It’s not the most technical of all of the passes, but the road surface is exquisite, the views are distinctive, and the switchbacks just keep coming.  Charging into one switchback after another, keeping up with my team, while being pressed by riders from Switzerland, my head had to be on a swivel to pick up the exit of the hairpin before committing to the turn.  I felt like Linda Blair in The Exorcist, with my head turning around and around, far more than nature had intended.

The day wrapped up with more special tests.  Dominic was the best of our group at these tests, and I was the worst, and it was reflected in our results.  One of these tests involved riding through the cones in a big parking lot with the goal being to come closest to a target time without knocking over any cones, putting a foot down, or blowing out of the patterns.  The photo below gives you an idea of what it was like. 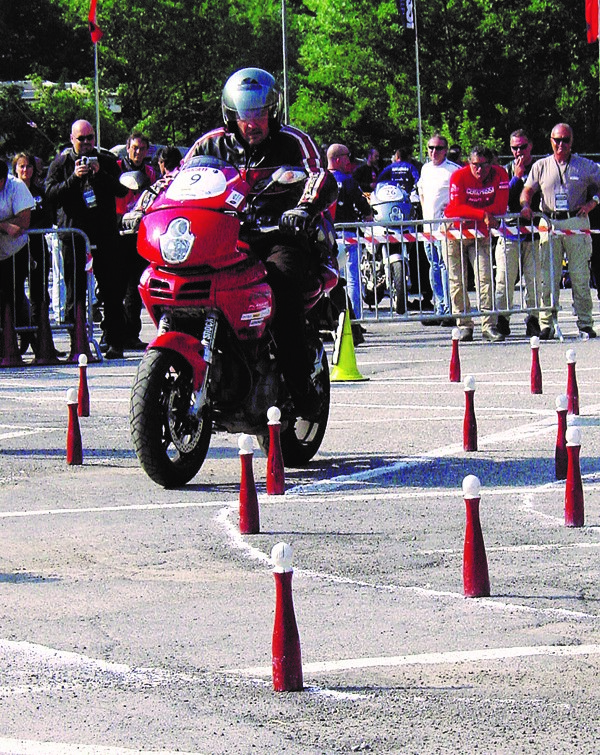 As I fell asleep at the end of day 2, I was exhausted but still buzzing from the road.  My lullaby was thunder ricocheting off the peaks.