With a commitment made to doing it, the next step was to figure out how to do it.  The next steps were submitting my entry, arranging a bike, and figuring out the logistics.  The entry part would be the easiest, and the arranging the bike would be the hardest, so it made sense to deal with the hardest part first.

The criteria included something that I would be happy to ride all day at a rapid pace over narrow and technical roads.  Ideally, it would also be able to carry me and my luggage when I was done with the Centopassi, and it also needed to be comfortable enough for a pillion so that my wife could join me after the event.  It had to be affordable, reliable, good handling, fast enough, and I had to have a way to get it to Europe for the event.  Just to make things really annoying, I had the idea that I wanted to ride something other than the Multistrada.

Triumph had just come out with the first generation of the modern Scrambler.  Being old enough to remember the original Scramblers, and caught up in the whole McQueen nostalgia that was going on, it seemed like it would be the ideal bike to ride the Centopassi while reliving McQueen’s efforts in the 1964 ISDT.  I stopped into my local Triumph dealer.  While drooling over the new Scrambler, I caught sight of a non-current Triumph Speed 4 (think of this as an early variant of the Street Triple) that was steeply discounted.  After a short think, I decided that this was the bike to use, and I became the proud owner of a Hinckley Triumph, and began to modify it for my use.

The first step was to get rid of the clip-ons that came from the factory, and to use an LSL kit to mount a Renthal bar.  An added bonus was that this turned the bike into the king of unintended wheelies due to getting weight off the front end.  With that sorted, I arranged a big tankbag, and some throw over saddlebags for carrying luggage.  All that was left to do was to get it to the start of the event. 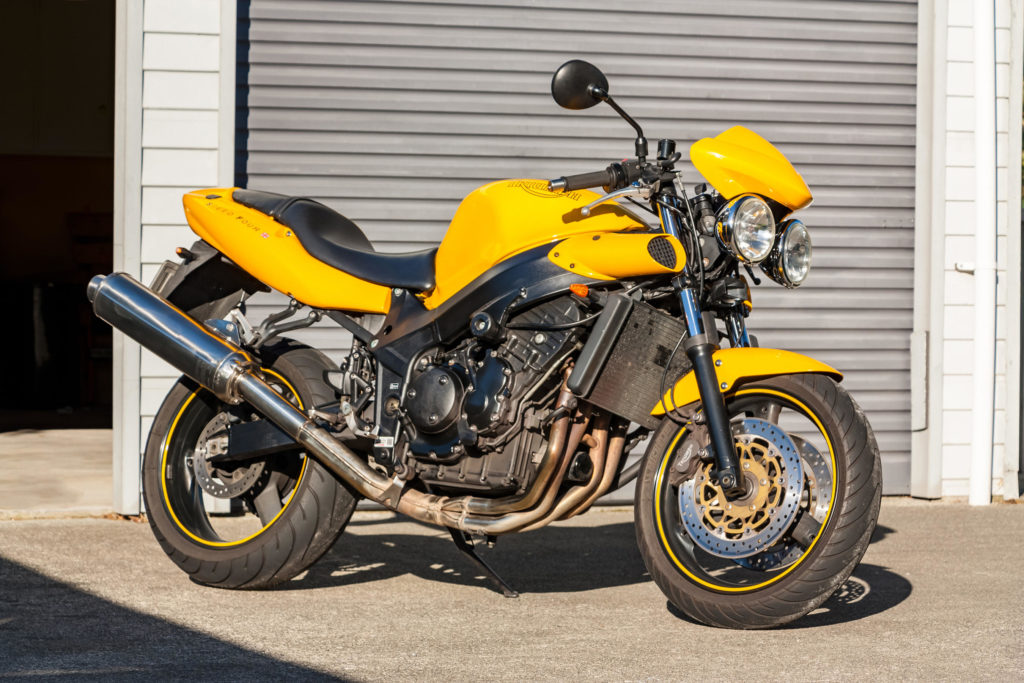 There were two obvious ways to get it there; surface freight or air freight.  The former was about the half the price of the latter, so I set out to arrange for the bike to get to Le Havre by ship in time for it to arrive, clear customs, be collected by me, then ridden down to Nice.  The freight broker gave the information on everything I would need to make it happen, and the first key piece beyond the bike was the title.  I had received my plate, but so far, no title.  When I asked the DMV, they said they didn’t have everything needed from the dealer yet.  The dealer told me their job was done.  After going back and forth between the two, it became clear that the dealer had messed up, and the state thought there was a lien on the bike.  Sadly, by the time I got that sorted out, and received my new title in the mail, the deadline for shipping it by surface freight had come and gone.

Air freight seemed prohibitively expensive, and it certainly aggravated my inner tightwad, so I began looking for alternatives.  I remembered that it was once true that you could arrange a factory delivery with BMW and other manufacturers, so I started calling US importers of European bikes to see what could be arranged.  BMW said, “Yeah, we used to do that, but not anymore.”  Triumph said no.  Likewise, Aprilia, Ducati, and Moto-Guzzi said no.  Same with Husqvarna and KTM.  In the end, there was not a single European manufacturer who sells bikes in the US who would arrange a factory delivery of a US spec model.

My next brain flash was to buy a used bike.  I didn’t know any European riders at that point, but I had worked with many German colleagues, so I reached out to see if any of them had friends who ride.  I got connected to a couple of German guys, but they could not tell me for certain whether it could be done.  This led to contacting some dealers in Nice, France to see if they would sell me a bike.  They said that unless I had resident status in France, that I could not insure and register the bike.  I got the same answer when I contacted some folks in the UK on the same question.  My options were running out.  The only thing left to do was to rent a bike and take my chances.  At least I could pick it up and return it to Nice, relieving a lot of my logistical concerns.

After reserving a DL650, the next step was to submit all the necessary paperwork for entry, and to send the organizers a check.  This was easiest step of all.  Unlike others, the organizers were ready, willing, and able to take my money.

The remaining logistical challenge was to get myself to and from Nice, book some lodging for the time prior to the event, and to arrange for a vacation with my wife in the aftermath.  The flight was easy to arrange, as was the hotel in Nice.  Based on prior experiences, we booked a condominium in a neighboring town for the following vacation, and booked my wife’s later flight to meet me in Nice after the Centopassi.

All that was left to do to prep was to begin fundraising.  For many of us, one of our biggest fears – bigger even than public speaking – is to ask others for money.  This was true for me, and it was also the biggest area of surprise.   One of the reasons I picked the charity I did was that it seemed like it would be easy to tell the story of why they would be a worthy use of donors’ money.  It’s true that it was an easy story to tell, but the surprise was how seldom I had to tell the story.  That’s because our friends don’t donate to our causes, they donate to us.  When people believe in you, that’s the motivation to donate.  The cause is worthy because you’re supporting it, and they trust you.  This was an incredibly liberating experience.  Learning to get past the shame reaction of asking for money is a very powerful stage of personal development, and I urge you to go raise money for a cause, and see how others come to your assistance.

One more note here is that I didn’t raise as much money as I had hoped before the event.  I had hoped to raise $3,000, but was only sitting at about $1,800 when I left for Nice.  The surprise was that the money continued to come in, particularly after my employer posted an article on our company’s web portal about what I was doing.  In the end, about $7,000 came in.   Not bad for something that just started out as a motivational gambit.