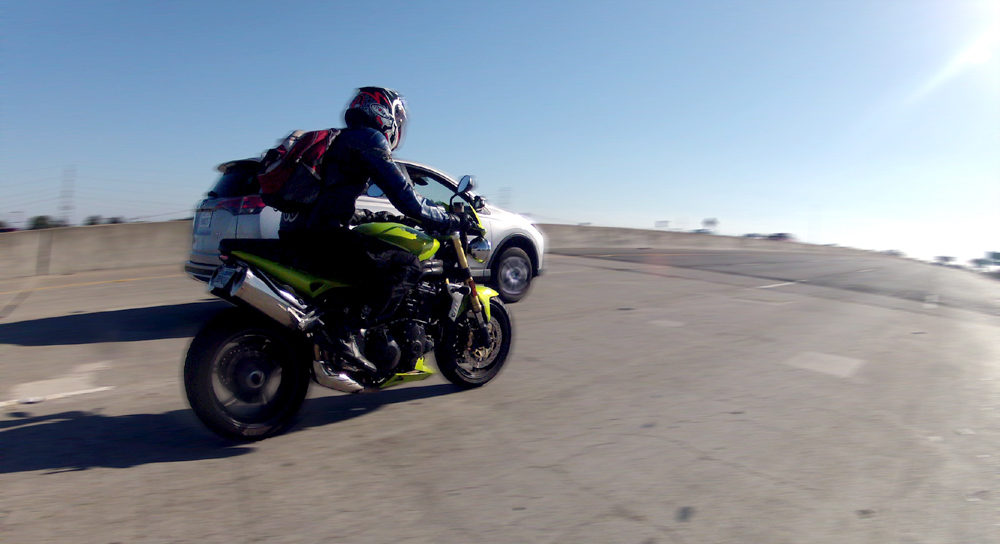 I was going east bound on Highway 92 in Foster City, CA, homeward bound after a day at work. It was just before 6PM, the worst time of the work day to find yourself in a car here, as the majority of the peninsula and San Francisco workers like myself rush to get home to the East Bay. I use the term rush loosely, of course. You’re not going anywhere fast through here if you’re on anything but two wheels.

I had just entered 92 from 101, smoothly maneuvering my Speed Triple from the freeway on-ramp all the way to far left to lane share between the number 1 and 2 lanes of this three-lane freeway, also known as the San Mateo Bridge. I ride through, exactly like I do at this very time of every work day. If you share the same commute as I do, you can probably set your watch by where my bike and I will be and when. I get between the lanes I want to be in, so I resume my diligence with my side mirrors as I ride steadily faster than the flow of traffic, but not too fast that I can’t react at a moment’s notice. I rotate my vision from ahead of me, to my left-side mirror, then to my right-side mirror, before back again up ahead. I do this in regular intervals.

At least three cars ahead of me, a black SUV safely switches lanes from the number 2 and into number 1.

I see another rider coming up from behind me at a faster rate. I switch my left turn signal on to let the other rider know I’ve noticed him, and I’m letting him through. He passes by, I’ve seen him before, but not with regularity. A sport commuter on a late-model Kawasaki ZX6R. He waves his appreciation for allowing him to pass, and I move back in line to continue lane sharing. As usual, I don’t try to match the passing rider’s speed. I just carry on with my own, going only as fast as I can safely feel over the flow of traffic. And in a couple of blinks of the eye, I saw it.

The black SUV gradually yaws from the center of the number 1 lane and to its right. It wasn’t jerky or abrupt, but I guess not gradual enough and just happened to be when the other rider I let through was crossing its right front fender. The sport commuter gets spooked, jerking his bars to steer his bike away in reaction. When the threat of collision registered to him as having abated, he swerves his bike back far enough left to allow him to smash his left fist over right fender of the SUV, before peeling off.

When I caught up to the black SUV I moved into the number 2 lane next to it, then I paced it. There were young men inside. I gesture to the front passenger to roll his window down. When he finally did, I flipped up my visor and yelled out:

“That guy’s a jerk,” pointing at the rider that had just passed us.

More often than not, I see fellow moto-commuters forget how lucky we are that we get to lane share in this state. I see them forget that it is barely legal for us to lane share, acting instead as if the practice is established dogma instead of remaining a murky concept in the gray. I see them forget that we are not entitled, that riders have as much of a responsibility to ride like we are not seen, just as drivers are to try their best to keep an eye out for us.

And drivers usually aren’t out to get us. It’s usually just honest mistakes. Just accidents in varying degrees. Even I’m not immune to not being seen and being moved into. But if I manage to come away unscathed, I’ll telegraph disappointment by a shake of the head at most, then proceed to leave the situation. It’s nothing personal is what I’ve learned.

And I remind myself that in a sea of multi-ton metal sharks, I’m just a small, albeit quick fish trying to get ahead, trying not to be in anybody’s way. So I don’t punish their “mistakes”. I remind myself that I put myself into this, in between the fray. I know the risk, and I willingly take it each and every time I ride through the crevices.

I wish the rest of us little fishes would learn. I’m not trying to get into the habit of apologizing for our collective behavior.