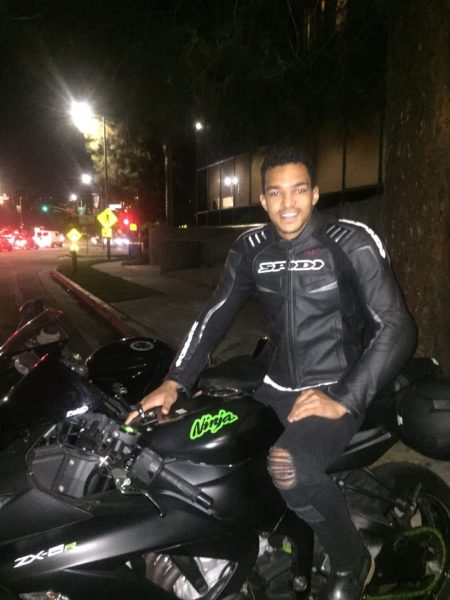 I recently had the pleasure of sitting down with Keison Cunningham to talk bikes, social media, gear, and all things in between. He’s a relatively new transplant to the Los Angeles area, and he’s more than excited to take in the SoCal bike scene. Let’s hop into this interview, and get to know Keison a little better.

T: How long have you been riding?

T: How did you learn?

K: I took the motorcycle safety foundation course while I was in the military, and that’s pretty much where I learned. At least the basic rider skills.

T: What made you want to get a motorcycle?

K: I watch a lot of YouTube, and I saw so many different moto-vloggers. So, that was something that interested me and I want to get into. And I had an uncle who rode before, so that passion to ride has always been there. You know just constantly seeing other people ride, and once I had the financial means to get my own bike it was something I didn’t think twice about.

T: Have you done any fun rides since you’ve been out here?

K: No. They had one like last week, a Halloween ride, but it was four hours away.

T: Have you joined any clubs?

T: Do you think you will? Are you interested?

K: Full patched in? No, that’s not something I’ve been interested in. I’ve had a lot of friends in the military who’re apart of MCs and they’ve tried to get me to join, but I like more just being apart of a riding group. Because there’s not that commitment level to it.

T: What was the first bike you bought?

T: Was that your dream bike?

K: That wasn’t my dream bike. I  actually looked at a GSX-R 600. I always liked the style of it, the one big headlight in the front. I liked how the tail light was in the back. It was visually appealing. I looked around for a while trying to find one I could afford. The Ninja just kind of just popped up on a Craigslist ad, and the guy was close, and it checked out. So, I ended up just going with that.

T: For your next upgrade what do you think you’ll be looking for?

K: So, I just got the bike that I have now last year. So, I think in another year or two I’ll probably upgrade to either the newest generation ZX-6R or a ZX-10R.

Hope you enjoyed getting your feet wet with Keison. Stay tuned for the next installment of my sit down chat with this motorcyclist.