I had ended the 2018 riding season with a few changes to my bike, some of them minor, some of them fairly major, but basically leaving me with a bike that I really needed to dial in. There was also a fair bit of major winter maintenance that I had completed, so going into the Pacific Track Time season opener at Sonoma Raceway was going to be an interesting and full weekend.

The weather cooperated, barely, as it was cool and humid, but at least it wasn’t actively raining on Saturday morning. We did, however, wake up to frost on all of the vehicles, so we knew it was going to be a slick, green track that we’d be dealing with. Since my primary staff “duties” for the weekend revolved around notary work, I was freed up to work on getting my bike dialed in and trying to get things headed in the right direction before the AFM race season kicks off in March.

First up was making sure my bike worked properly. After rebuilding the transmission, I wanted to be sure that, mechanically, all was well. Once I knew the major things were working, then it was time to dial in some electronic settings that needed some tweaking, primarily around the auto blipper. Since installing the Attack Racing rearsets, I’ve had issues with my settings – some of it was just things I needed to change in the software, but the autoblip was still giving me some issues.

Due to the limitation of my injured left leg, my settings had to be adjusted to me, as a “normal” rider’s settings simply didn’t work with my limited range of motion in my ankle. A monitoring session had gotten me closer, and then I just needed to tweak the settings. At first it was too sensitive, so had to dial it down a bit, and after that it seemed to be pretty much in the range where it would blip when I needed it, and it was keeping the bike smooth, but it wasn’t overly sensitive or delayed.

Finally it seemed my bike was working, so it was time to get back to actually riding the darn thing. We got some sun in the afternoon and I got to go turn some laps, but due to the cold, slick, track in the morning, I never really did trust the traction and kept with some rather slow laptimes.  There was still setup with my Ohlins and spring rates that needed to be base-lined, as I have never ridden my current set up at Sonoma. Thankfully Mike Canfield was available by text to take my feedback and get me pointed in the right direction. I made some additional adjustments that evening, and was ready for Sunday. 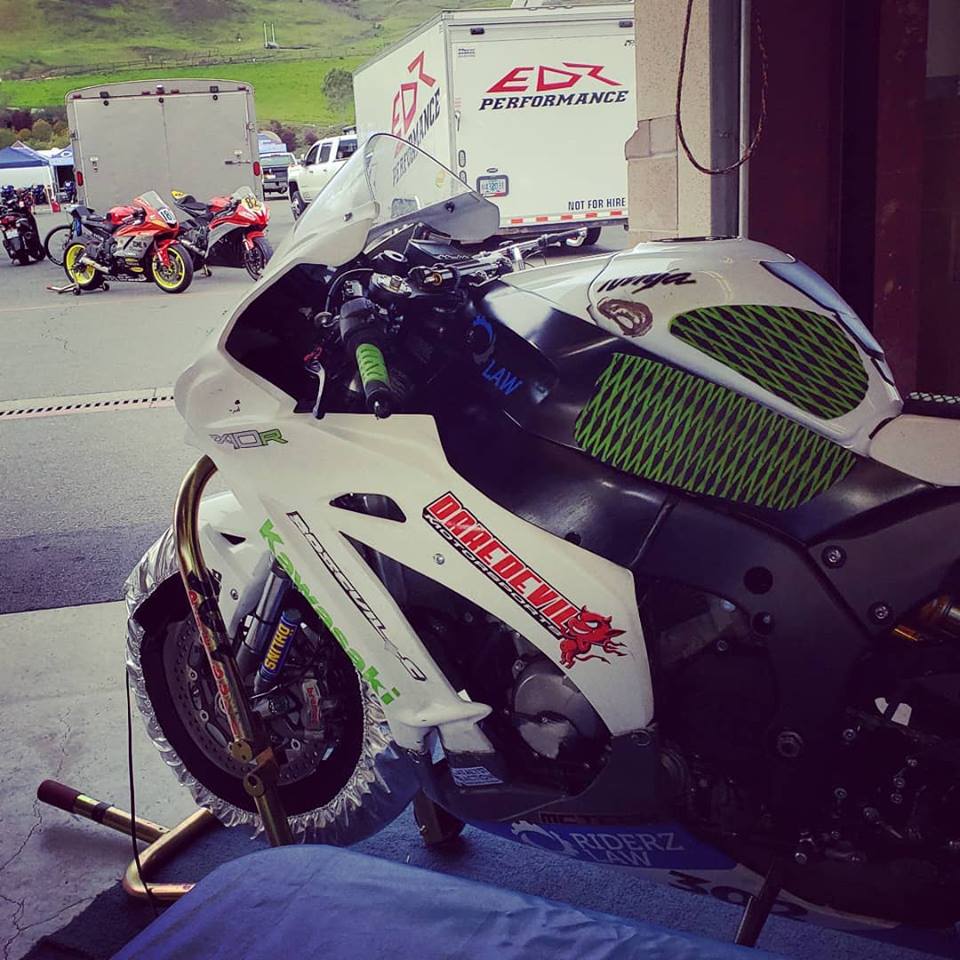 Sunday morning was warmer, but also came along with some minor rainfall. I didn’t feel like working on my sliding skills, so waited to get on track until things were drying up. In the afternoon grip was a little better, so I was able to get the bike’s suspension closer to a good starting point, and feeling a lot more comfortable. For the last A group session I went out with a couple friends, and my buddy Jay and I started turning some slightly faster (albeit still slow compared to race times) laps. We had some fun going back and forth a bit, and that session made my weekend.

The day was ending with some NRS practice starts. I knew the clutch in my bike was pretty burnt (new one was already on order but hadn’t arrived yet), so I decided to go roast this one and get some starts in before the race weekend which is the next time I’ll be on track. On the second start my clutch started to slip really bad, so on the third start I had to really ride the friction zone to get going, but still wasn’t a horrible start all things considered!

The season opener was definitely a productive weekend for me. While no one was going to be setting any lap records, I still had fun and managed to complete a lot of necessary set up on the bike that will help get things pointed in the right direction for Buttonwillow next month.