2018’s season preparation is already far underway, and the investments have already started. The biggest purchase (besides my street/B bike) was the Ohlin’s shock and cartridge kits that I bought for the race bike. Thankfully my sponsorships made these purchases a little easier, but it’s still far from cheap.

I knew, however, that if I was spending this kind of money on items such as these, that it would be worth the investment to also have a pro come out and help me with a lot of the “little stuff” that, as a relatively newb-ish amateur, I just don’t know. A local mechanic, who also works with some of the best teams in MotoAmerica, is local to me, so I had him come out and help me with this aspect of my set up.

Shawne arrived on a sunny Wednesday, and we set to work. As I was running a bit behind, I was in the middle of installing the front wheel when he arrived, and my first comment was on the set up that the bikes have for the axle. He jumped in and explained a few things that I could do differently, and then proceeded to show (and help) me learn how I could get he wheel on and off by removing about 1/3 of the parts I normally took off/undid.  Oh boy, today was going to be interesting! 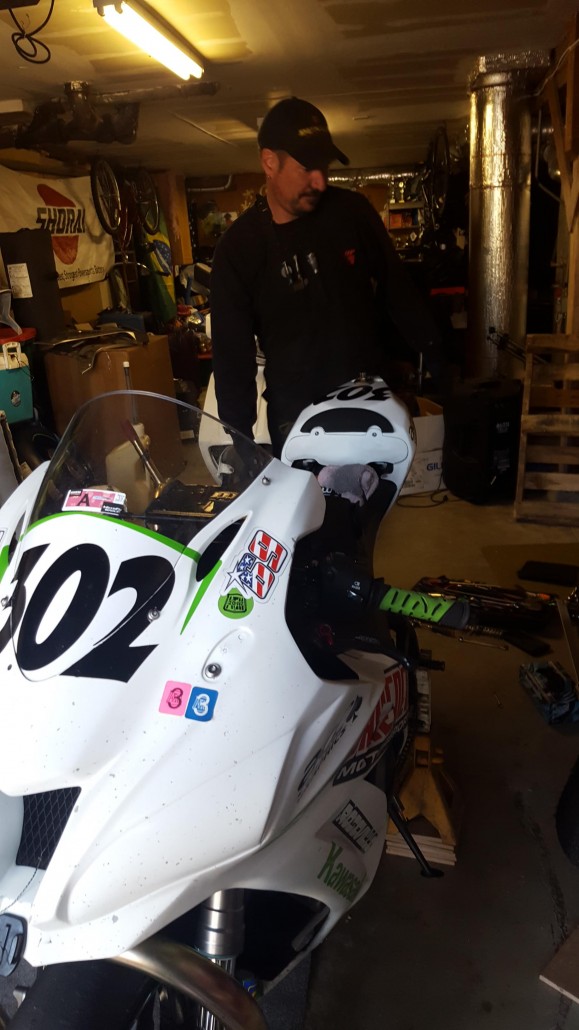 Once the front wheel was on we moved on to the rear shock, where we again changed a few things around so removal and install would be easier, got numbers on setting up ride height and shims, and I was left with instructions on welding a nut to the pivot mount so I wouldn’t have to remove the entire seat/tank/etc just to pull the shock.

We moved on to other areas of “basic” set up such as setting the wheel base, discussing what is needed at the different tracks, and a few other small investments in tools that would make my life a million times easier.

By the time he left, there were several items we covered, including:

I ended up with a full page of notes by the end of our little “set up” session. While a lot of what we covered was relatively simple, they are all little things that will add up to making my life much easier down the road and at the races.

Part of me felt a little silly for not doing this earlier in my track/racing career. So much of what we went over was – well – basic. None of it was too complicated, and Shawne had ready resources on who knew some of the settings specific to my bike. It was a minimal investment in time, and hardly any investment financially, but all of the little things can really add up! It’s a simple investment, if you’re spending big money on racing and trying to get everything dialed in, making a small investment in learning all the little tips and tricks is just silly not to do!