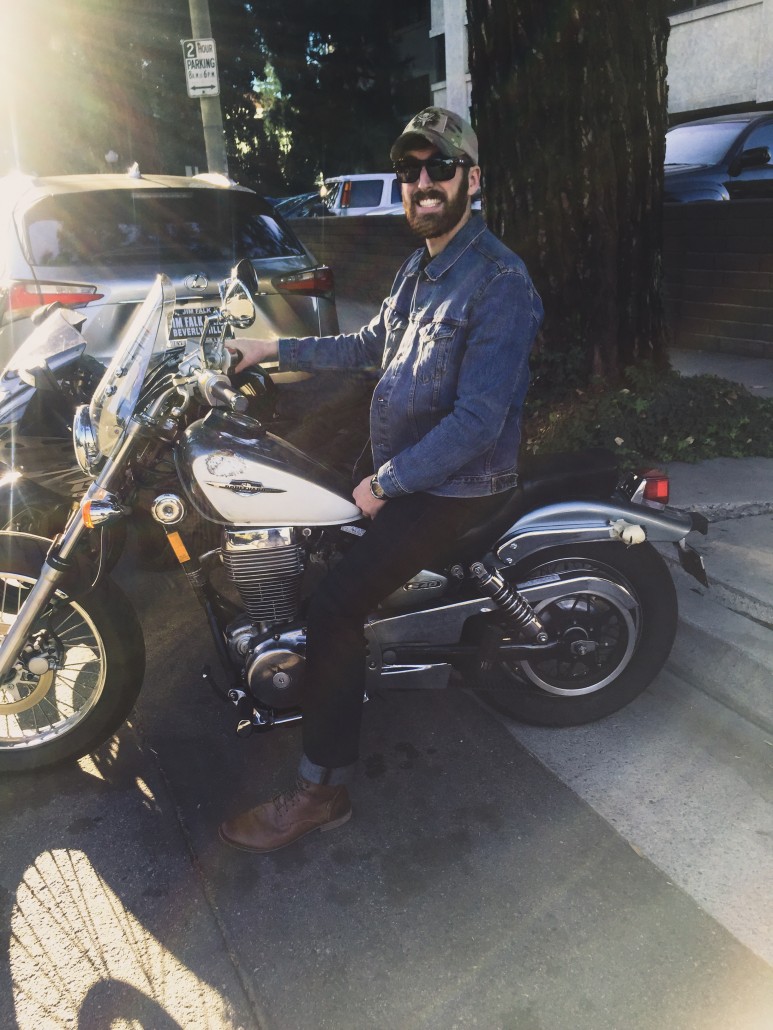 T: When did you first learn to ride, given you had a fear?

TF: Riding the scooter kind of got me prepared, and I could always ride. I even did the California Motorcycle Safety Program. When I was there some of the stuff they were teaching– some people pick up quick, some people it takes them a little bit, but I had it immediately. Just because I was used to being on a bike, carrying the weight of it, going into turns. There was a lot of great stuff I learned there.

T: Can you talk a little bit more about the California riding school? Some of the benefits?

TF: I was happy I did it because it made me more comfortable going higher speeds in turns, and it brought my awareness up. It also never occurred to me to turn my head and look where I’m going, because I want to look at the ground and make sure I don’t hit something. You can see that if you’re scanning ahead, and that was one of the biggest things. Even in first gear turning in a parking lot, and just turning my head made such a huge difference. It was probably the coolest thing I learned there.

It’s like when you’re a kid and your dad’s like just don’t think about it, just go. Then all of a sudden you’re riding, and you’re like, ‘Oh my god it’s so easy’. That’s exactly how I felt when they taught me that. It was crazy to me these simple little things. Other stuff too like shifting, making sure people can see you, not getting crazy. We’re one of the only states that you can lane split.

T: Do you think they should implement lane splitting in other states? Does it help the flow of traffic, or does it hurt it?

TF: Here it certainly helps us because otherwise we’d be just another car space on the freeway. Here in LA it’s beneficial and most people pay attention. I would say 80% of the time people move to get out of the way. It has definitely made me more aware when I’m driving my wife’s car. I’m always keeping an eye out for bicyclists all that stuff.

The safety program is like two hundred and fifty bucks, they have it on the weekend now. You can do it Saturday and Sunday. It was great, I learned a lot of stuff that I didn’t know before. The coolest part about it is you take the certificate to the DMV and if you’ve done the written test for the DMV you get your license, that’s the coolest part.

I hope you enjoyed reading part two of my interview with Travis. Part three is on the way.