When it comes to getting to work, most of us have to deal with the best way to make that happen. Of course, there are always options, even if they don’t seem reasonable, but they do exist. Over the past few months I’ve had to evaluate my personal choices around commuting.

For the past 11 years or so, I’ve primarily commuted by motorcycle. Here in California, the ability to lane split (travel between lanes of cars moving in the same direction) has made it the transit option of choice. Combined with where I lived, it proved to be the most cost effective, time saving option I had. After a couple years of choosing the motorcycle as my primary transport, it became habit and I enjoyed the flexibility it provided.

Earlier this year, however, I moved closer to my job. This gave me some additional options for my daily commute that were still very reasonable. The main choice that was a good fit was BART (Bay Area Rapid Transit), a local commuter train with a station less than a mile from my house. The train ride didn’t take much longer than taking the bike, and the trains were frequent enough that I wasn’t held to a hard schedule.

For awhile, however, I was in the habit of taking the bike and continued to do so as that’s simply what I was used to. In early August, my years of commuting by bike came to a screeching halt when a guy in a small pickup decided to make a blind, illegal u-turn right in front of me. Wearing all my gear saved me from anything worse than a bruise, but my poor bike didn’t fair so well and was most definitely totaled.

I was now faced with some choices, and the big thing was that I had to choose if I was going to try to commute by my 125cc scooter (on surface streets since it’s too small for freeway use) or public transit. I opted to give BART a try, and within a few days decided I could live without a street bike for awhile and invested that money in other areas of my life.

Being in the Bay Area, however, I began to find that not having a bike available was actually more inconvenient than I realized. Any appointments or meetings that weren’t in my local area proved to be difficult to coordinate. The unreliability of traffic meant I had to plan lots of time to get to these places, and I would end up with hours wasted sitting in traffic that I previously could have carefully made my way past.

While my commute to work was proving to be pleasant enough, anything outside of that was not working so well for me. I didn’t like having to deal with parking in the city of San Francisco, or being forced to walk long distances or pay for an Uber. It made attending gatherings a potentially costly affair, and I soon found myself avoiding most get-togethers with my riding friends.

For those reasons, when a friend advertised his 2016 ZX10R at a great price, I was ready to take the leap. He was able to work with me, and we came to an agreement. Not only would this bike serve as a street bike, it would also be a “B” bike to my race prepped ZX10R. I was stoked to have a bike again, and almost instantly life became easier. Making it to appointments on the other side of the bay was no longer an issue. Attending social events just got a lot easier. Besides the stress release factor – I’ve known for years that my best stress relief came from being on two wheels, and while track riding is amazing, I can’t do it often enough to rely on it for that purpose. The ability to head out for a quick jaunt after work or over lunch on a telecommute day has improved that aspect of my life already. 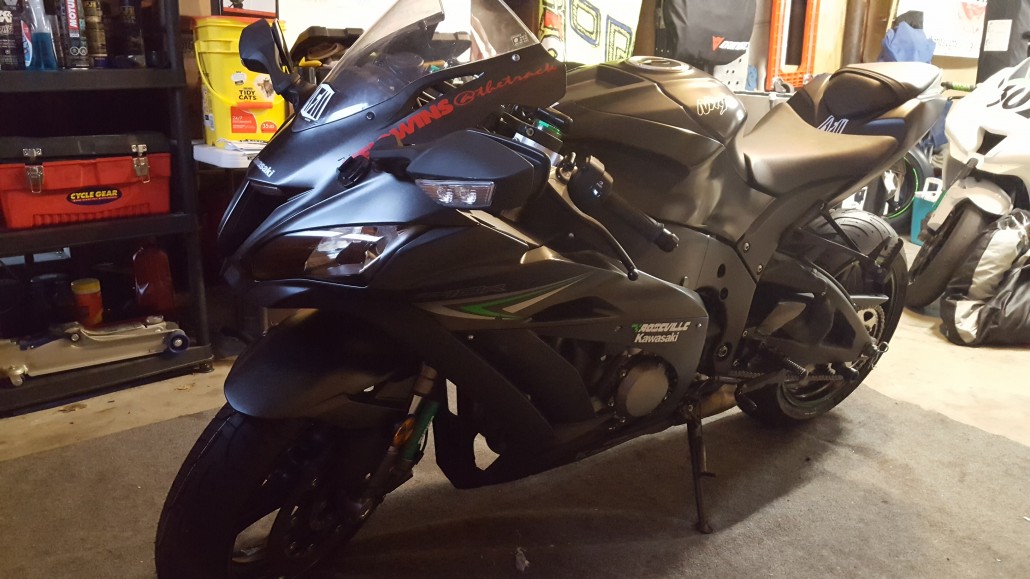 All set up and ready to roll!

After what happened to my GSXR, however, I’ve chosen to continue with public transit for my day to day commute. Now that I am set up for it, I find it very easy and low key. I have the bike available if I need it, but no longer dealing with aggressive, distracted cage commuters has proven to be nice.

Having the bike there is great, and even when good public transit is available, it’s nice to have the option of not taking it if I so choose.