I’ve always been kind of lucky.  Not “behind an armored car that lost all its money out the back” lucky, but I have had fortunate timing; in part by coincidence, and part observation.

So it came to pass that Hootie II, the second iteration of my boxer twin R65, started running rough one morning. I was on my way to run some errands when it started missing and acting like it was getting no fuel.  I decided to do the safe thing and sputter back home. Made it! That bike never stranded me, not even when it threw a rod on the freeway! I was able to coast it up the off-ramp to Mesa College, where it proceeded to dump oil all over my foot and die.

I’ve had that bike for over 30 years. We had many adventures; salmon fishing out of Stinson Beach, desert runs, road trips. But it gets to a point where a vintage bike is just going to keep wearing out and costing ridiculous amounts of money. The bike shop I had it towed to told me it needed both carbs and the top end rebuilt. Estimate, $3,600.00!  The Airhead Adventure was over. I sold it to my buddy, who has an encyclopedic knowledge of all things air cooled and BMW.  Joking, I asked if he’d sell it back to me. He called the next day to say that the top end was fine, there was gas in the oil, he rebuilt the carbs.

Did I want it back?

I thought about it and decided to move on. The BMW R65 is a great bike, but I wasn’t sure it would last. Somewhere in Newport Beach, there is a woman riding a purple BMW with skulls on the tank.

According to Grampa Simpson, back in his day they called turkeys “walkin’ birds.” I had just joined their ranks. I’d become a walkin’ turkey.

I started researching used bikes online. None of those Craigslist offers, I wanted a bike from a reputable shop.

Note: even used Harleys are out of my price range; that’s a shame because many of them are good for short riders. Most of the bikes I found would have needed some aftermarket work to lower them and modify the seat.

So I was down at Nico’s taco shop, which is next door to the Triumph dealership, just down the hill from my house. On a whim, I stopped by the shop to check out their used bikes and trade-ins. Their salesman, Jeff, walked me through the selection. I was interested in these adorable Royal Enfields; they were only $5000 brand new!  Sadly, Jeff told me that these bikes are only good for running around town, these little thumpers cannot go freeway speed. My gaze wandered past the Enfields and was drawn to a bright BMW logo on one of their bikes. It was a 2008 F650 GS; all modern, dual purpose, and…BMW must have heard me bitching, because they finally made a GS I could touch the ground on with both feet!  They were asking $5000 for the bike, so I dropped $500 as a deposit. 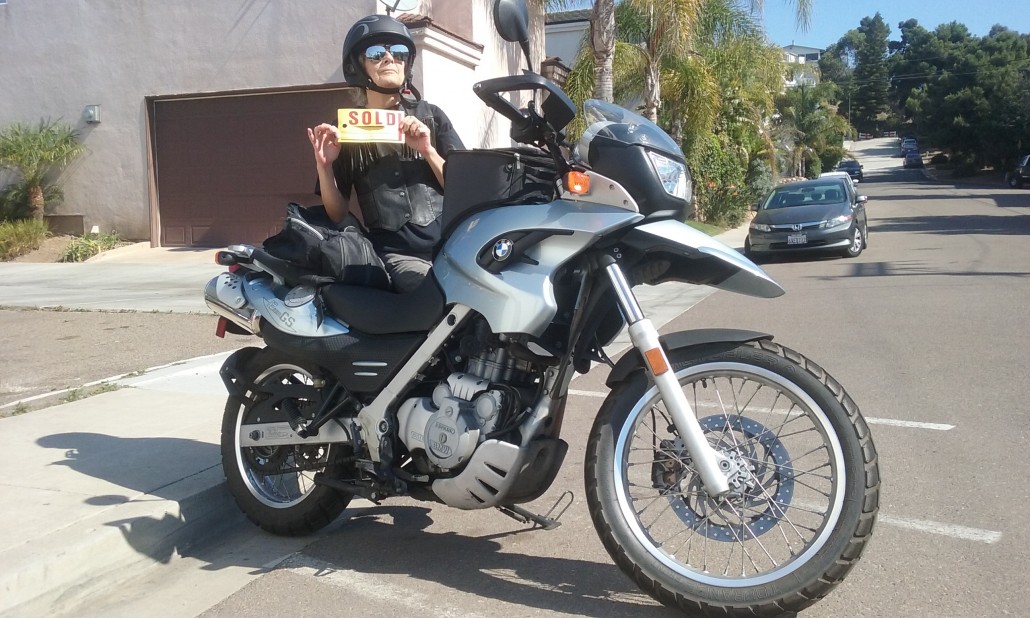 Synchronicity kicked in. At that point, we were in the final stages of settling an accident three years prior, where a woman turned left in front of me so I hit her. These cases normally don’t take this long, but she’d given me a fake name at the site. Later she called and my cell phone disclosed a different name, which turned out to be the real one.

The settlement check came in a few days after I put down a deposit. It was enough to buy my new BMW 650.  As we know, life is not always skittles and beer, so the PTB tossed a lug wrench into the work

When I came back down after tacos, I was going to take a test ride. They wheeled it out.

It wouldn’t start. No spark, dead battery. Now, we all know that a lead-acid battery will not hold a charge after being drained and sitting for four months, right? A deep cycle marine battery is a different story, but this was not a marine battery. After a couple of hours, they called to tell me it was ready to ride. I was impressed by my ability to touch the ground, also the bike is about 100 lbs. less than the R65.  Plus, it’s actually a little over 700 cc, but they call it a 650. I had a quick ride around and up the freeway and back. I was impressed by the torque of this single cylinder. It has a lot of pep at the low range.

This is the first “modern” bike I’ve owned. Fuel injection, no petcock, and…HANDWARMERS!

It came with a set of soft bags; a tank bag and a crazy zip together back bag that doubles as a backpack.

Transaction completed, I thought I’d ride out to Lakeside and show it to a friend. We hung out all day, and then, when it was time to go home, the bike wouldn’t start. Happily, my insurance includes towing, so I got it dragged back to the house.

I called the Triumph shop, and they sent a guy up to coast my bike down the hill to the dealership. They put in a new battery and brought it back.

This bike expands my riding opportunities. There are lots of dirt trails in the San Diego back country that are suitable for this type of bike. I can take it where I’d never take Hootie the Street Bike, and I’m excited to explore new places!