We got on the road at 9:00 AM, and the weather report shows a storm coming in where we are headed. We had a fine time in St Moritz, but it is time to head north to Stein am Rhein. Up and over Julierpass we went. It was warm enough when we reached the village in the next valley, and we pulled over to take off our jacket liners. There were still dark clouds but the sky was clearing. We were hoping the weatherman was wrong on the weather up north. 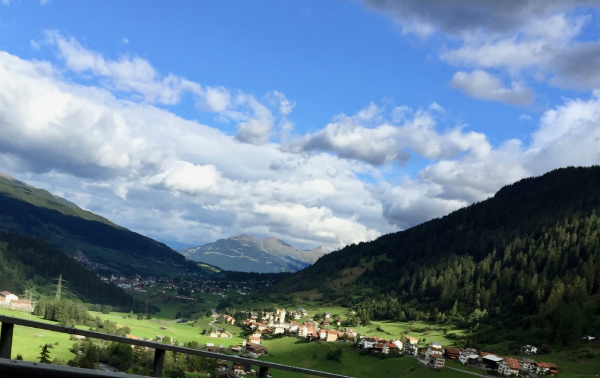 We would be taking Hwy 13 north that runs along the boarder with Liechtenstein. As we got near Liechtenstein the wind came up. The strongest wind I’ve ridden in the 50 years I have been on a bike. Trucks were pulling off the road, and wind speed must have been 50 MPH+. Wind was swirling like a small tornado, stripping leaves from green trees; we watched the leaves swirl in front of us as we rode on. I slowed way up and took the next exit to get some shelter. We drove through a border, I thought we were in Liechtenstein. We found a small Pizza restaurant and stopped for lunch. When it was time to pay I found out we were in Austria, and needed Euros to pay but we only had Swiss Francs. The proprietor was nice enough to take a 20 CHF note. His elderly father seemed concerned that we were going to ride into the storm, so he followed us out and watched us leave.

Just a few miles up the road the rain started. We then rode over two hours in heavy rain. After about a half hour of the rain it got cold and we had to stop and put the liners back in our jackets. It was still raining when we got to our AirB&B in Stein am Rhein. We found the room key and got out of our riding gear. Only our gloves were wet, thankfully our jackets and pants did their job. I would not want to think how cold we would have been without the riding gear. We met our host and asked about someplace for dinner, and she recommended a fish place on the water. The restaurant was right on the Rhein River. We had a great view as the sun set.

We got up early Friday morning and went out for coffee and yogurt. After breakfast we walked down to the river. The skies were blue and it was just a fine morning for a walk. A light fog was rising off the river making for a picture perfect morning.

Veronica and I came to Stein am Rhein in 2004. We were happy to see it is still a nice small town and has not gotten commercialized. It was time to pack up and head to our next destination, the Rhein Falls.

This has turned into a beautiful day to ride. After the falls we crossed into Germany. The roads were just as nice, with the big change being the speed limits. In Switzerland maximum limit off the highways is 80 kph or 49.7 kph. In Germany, it goes to 120kph or 74.5 mph.

When we got to the Toff Center to return the bike, something was going on. There were tables with pretzels and the smell of sausage cooking. The women were wearing the traditional Dirndl and the men were wearing lederhosen. Yes it was Octoberfest! The Toff Center sure knows how to have an Octoberfest sale. Free beer, food and espresso with Swiss chocolates. It was a great way to end our trip.

Hope you enjoyed coming on our trip with us!