We got a really good nights sleep, which was great since we were tired from the long day yesterday. We woke up to blue skies, and it was crisp and cold with a light frost. We enjoyed a nice breakfast at the Hotel. The European breakfast of sliced meats, cheeses and breads can grow on you. The yogurt in Switzerland is the best I have ever had. This morning Scott Hendrickson came over and asked if we were riding the BMW out front. Scott and his son Eric were on a self guided Edelweiss tour of the Alps. They came from the Nashville Tennessee area. You do meet the nicest people riding a motorcycle.

It was time to gear up and see the sights of the valley. First stop was going to be the funicular that will take us up to Muottas Muragl. We were told the view would be fantastic and it was. Clear and cool with a light breeze. You could see forever. We rode up the valley to Morteratsch where we were told we could see local cheese being made. We found the small road that ended at a rail stop with two hotels. We parked and walked across a small bridge to the older of the two hotels. They had a restaurant with outside seating, and the food looked good. I told Veronica the hotel looked good for lunch but it was just a little to early eat, so we went looking around.

Walking around, Veronica spotted the sign for where they made cheese. There was a large group speaking German having lunch outside. After seeing their food we knew this is where we were going to have lunch. 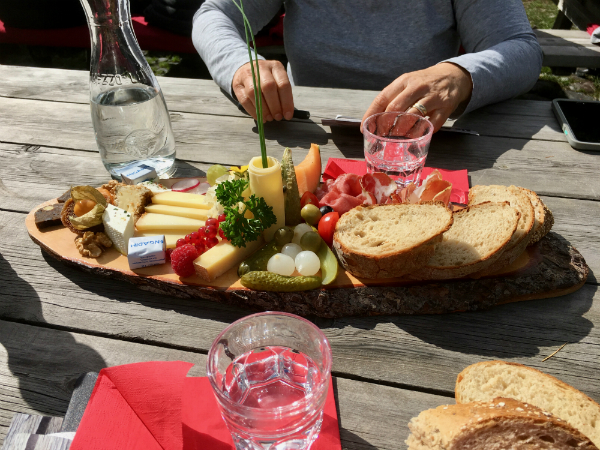 This is what we saw the large group eating. Only their boards were 3 feet long. We decided on the smaller serving. Breads, meats, fruit, and cheese made on site. You can not get a spread like this in California! Four days ago it looked like snow would keep us from getting to St Moritz on the bike. I was so happy the weather changed. We rode back to our hotel for a rest. After our rest we freshened up and headed down the hill to dinner. I had the local fish and Veronica had the barbecued beef ribs. She was surprised to get beef short ribs with barbecue sauce. The polenta served with the ribs was very good. The chef did come out and talk with us, asking how we liked our meals. Service at this hotel was top notch.

My birthday was today, and “67” is just a number. I will continue to not act my age. The hotel surprised me with a card and a small cake at breakfast. As birthdays go it does not get much better than this one was – waking up in St Moritz on a motorcycle ride through the Swiss Alps. Best part is that I was able to share it all with the woman I have loved for 40 years.

That wraped up our time in St Moritz, and part 3 of my trip report. Next we leave for Stein am Rhine and our last night on this ride. It will be a long ride and the weather is changing.