Riding the Swiss Alps was a bucket list ride for me. I was surprised and pleased that my wife wanted to make the ride with me. Last year I stopped and checked on rental motorcycles at the two dealers in Basel Switzerland. The Suzuki-Triumph dealer had several bikes that would work for me, but not with the luggage needed for both of us. The BMW dealer’s salesperson at first told me they did not rent to riders from the USA. I asked why and was told a US rider rented, got tickets, crashed, and flew home, leaving a mess for the dealer. I really needed a bike with luggage and the BMW RT filled the bill. The salesperson suggested I email the owner. I did this explaining that my daughter lived and worked in Basel. Felix the owner wrote me back offering me a 2005 RT or a new GS for rent. Both had the luggage we needed. Being vertically challenged the GS was too tall so the 2005 RT was reserved.

Following is a journal of our trip. 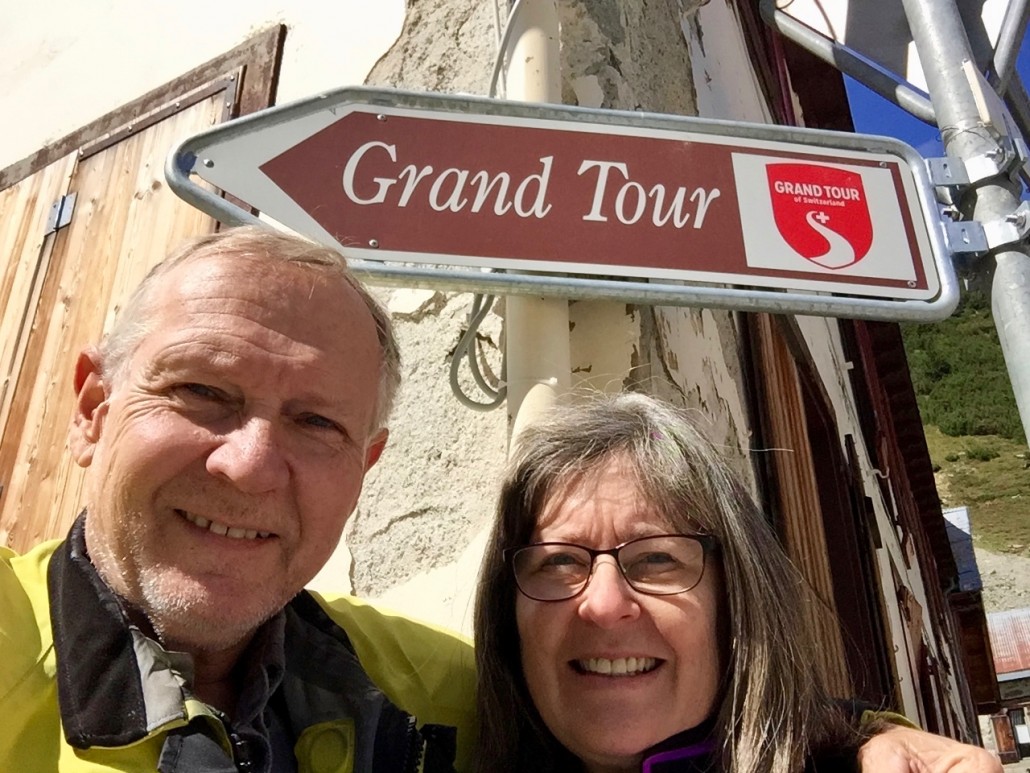 I was given a tour of the RT and the sales person set up the GPS to English. Lots of dings and dents on the old 2005 bike. It would be fine for our ride and I was told not to worry about any small scratches. The next day we got on the road at 10:00 am. Yes everything does look like a postcard. We went over Brunigpass and dropped into Meiringen, our stop for the next two nights. We were a little early so we got the bike parked and looked for a coffee. After our coffee we headed for our Air B&B to check in and meet our hosts. Both are Expats from the USA and have been in Switzerland for 25 years. We walked around town looking for a light dinner and found a cafe. Veronica had the soup and I had the smoked salmon plate. We split a flatbread with ham. One thing we are getting used to is you pay for water at dinner. Also many times wine is cheaper than the water.

The next day was a perfect morning. I had checked Alpenpasse and found that Furkapass showed closed by the snow overnight. The passes are very close and we did not have a long day of riding. We stopped at a bicycle shop and was told most closed passes open by noon. This was good news so we rode the Grimselpass up and over. I was impressed with how good the roads were. Tight wide turns with a steep climb up the mountain. In Switzerland the maximum speed limit other than freeways is 80 kph. Sounds like a lot but it is only 49.7 mph, slower than I would like to ride. Veronica said it was just fine. We stopped for lunch at Gletsch, a small village at the bottom.

We checked and sure enough Furkapass was open. The road got twisty as we reached the top. We even had a cow in the road just after the summit. Snow covered the hills but the was road clear. You do feel like you are riding through a Swiss Calendar. Everything is picture perfect in Switzerland. We got to the bottom and couldn’t turn left to Stutsenpass because the road was closed. We asked the police at the turn around and were told two hours minimum wait. Turned around and headed back the way we came. Dark clouds were moving in, so we thought we might get some rain or snow as we head back to Meiringen. We did get back before the storm came in. Tomorrow we will have a long ride to St Moritz.