I think we can all agree that the Moto Gp season finale was epic. So much happened in those 30 laps. Zarco lead most of the race, Jorge wouldn’t move over, Marquez crashed without crashing, both Ducatis crashed for real, including Dovi, and many of the teams had their test riders on the grid. So let’s talk about the crashes. What caused Marquez to over cook turn 1 and Dovi to over cook turn 8? 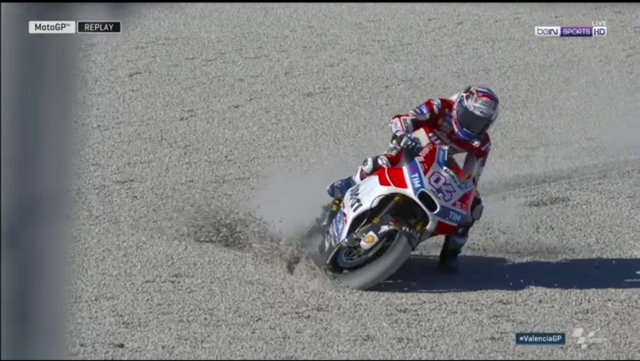 Marquez was trying to avoid the risk of engaging in a battle with Johann Zarco. So he let Zarco past and followed close behind him until at two thirds race distance he got impatient. Marquez must have believed that he could safely pull a gap at the front. The problem he faced is that it’s easy to surprise yourself after you’ve been riding at someone else’s pace for a while. Most track day riders and coaches can relate.
If you’re coaching another rider you’re riding slower than normal. Even though you’re probably using the same reference points as you usually do, you adjust quickly to riding at that pace. So it’s easy to make a mistake if one lap you go back to riding at your normal pace. Your muscle memory has adjusted to braking less. So if you use the same brake marker at the end of a straightaway it’s easy to make a mistake because you’re not used to braking for that marker anymore.
Marquez knew that his normal, comfortable pace was much faster than Zarco was going. But when he went into turn 1 normally he caught himself by surprise. Marc Marquez with his superpowers was able to turn a crash into just a little run off and then go right back to his “normal” pace. The same thing happened to Dovi after Jorge crashed. Dovi couldn’t find a comfortable place to pass, so he got comfortable with Jorge’s pace. When Jorge inadvertently got out of the way, Dovi was able to go back to his normal pace and he caught himself out the same way Marquez did. Unfortunately Dovi wasn’t able to handle it the same way Marquez did and there was no way for him to come back after that. 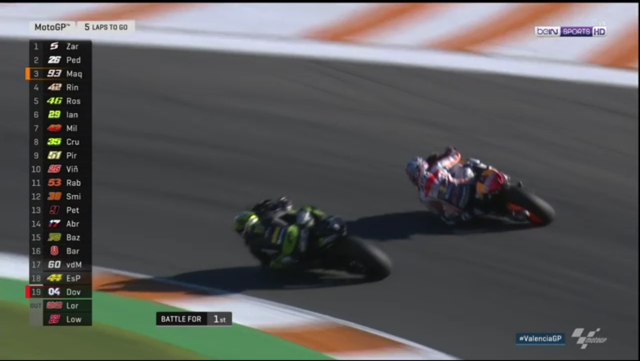 It’s been a fantastic season of Moto Gp. Ducati put in a great effort against Repsol Honda. They surprised the whole world with how strong they were from the very first round. The championship came down to Valencia this year and it was great to have so many riders in contention for the win so far into the season. 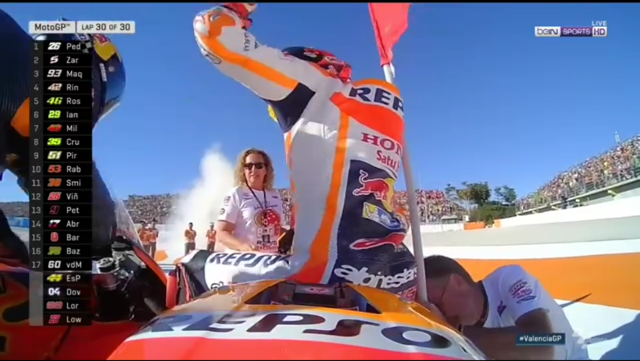