The 2017 season proved to be a steep learning curve for me, in a variety of areas. In Part 1 of this post, I ended with discussing my need to respring the bike, finally recognizing that it was way too stiff for me and my riding. Hindsight being what it is, I realize now that waiting as long as I did was a very stupid move. Not only was the bike a little too stiff – it was WAY too stiff. I had it resprung, and once I returned to my previous suspension person and we started to get it dialed in, the bike was suddenly compliant and did what I asked of it. The issue was, I had been riding a jack hammer and expecting it to be a flowing ribbon. This had developed some subconscious fear of the bike, and I wasn’t sure at the time if it was me or the bike.

As it turns out, a lot of it was the bike.

By the end of the season, the bike was “close enough” to dialed in (for still being on stock suspension and set up) that I was finally confident enough in the machine to push my riding a bit out of my “super safe” comfort zone. Throughout the majority of the year, I had no idea just how much of a detriment I had caused by waiting on something so simple. Instead I had put it off, and therefore got myself scared of the bike; I had put off using a suspension tuner familiar with me and my riding; all of this added up to delaying my program severely. Add in the issues with my leg (there was – even still is – a very legitimate fear of losing it due to osteomyelitis) and the stress that was causing me both physically and especially mentally, and it made for a very rough year.

I could have mitigated a lot of my bike-induced stress by a simple respring right off the bat.

Recently I picked up a second ZX10R which will serve as my street/B bike. I knew this bike had nothing done to the suspension, so when I hopped on it, I knew it wouldn’t be compliant. Holy smokes, now I could clearly see how such a “simple” thing had made me terrified of a bike I was unfamiliar with! The bike doesn’t want to turn, hold a corner, the suspension doesn’t absorb forces like it should – now that I know what it CAN ride like, I see why I had so many issues starting out on the race bike!

Suspension aside, one of the things I’ve been able to notice with the big bike is what basically boils down to eyes, but it’s a bit more complicated than just that. Techincally, I was quite a bit faster on the smaller bike, but my brain didn’t have to work as fast. Point A and B had x amount of time between them, and my mind (and eyes) were trained to have that much processing time available. On the bigger bike, things happen faster. You accelerate faster, you go over a certain distance faster, things happen sooner. Your mind must work that much faster.

My mind was taking its sweet time learning this.

I’m no young gun. In fact, this next season, I could run the Formula 40 class if I wanted. All of my on-track experience (with the exception of my very first two track days) has been on a 600 class bike (and not a modern 600). My own learning style is one of taking things one small step at a time. Learning to “think faster” is not a fast process for me (yes, the irony is strong with this one). 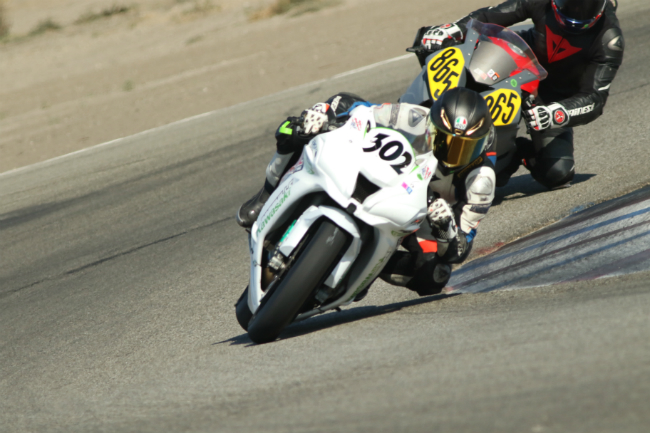 Getting more comfortable at the end of the year.

Looking back on 2017, I can now see some big mistakes I made.

It’s interesting how so many things can combine to put us into certain positions. Riding motorcycles is a dynamic activity, and for most of us speaks to our soul on some level. It’s a sport where the rewards sometimes have to be nothing more than personal, battles may be fought only in our own minds, but the life it breathes into oneself is unparalleled.