The season finale for AMA Supermoto was set for October 7, 2017 at Five Flags Speedway in Pensacola, Florida. I road tripped it out there with Toxic Moto Racing. Rain was on the forecast for the weekend but nobody thought much of it until it started getting closer to race day.

When we got to Pensacola at about 3 in the morning on Friday, the radio stations were talking about the possibility of a “tropical storm”. When we got to the track we set up our pits and prepped our bikes. By the afternoon the radio stations were saying that the area was now on “tropical storm watch” and the race officials started to act a bit concerned. Practice was supposed to start at 4. It was now about half past noon and they were delaying the opening of registration. I continued to prep my bike and prepare for practice. 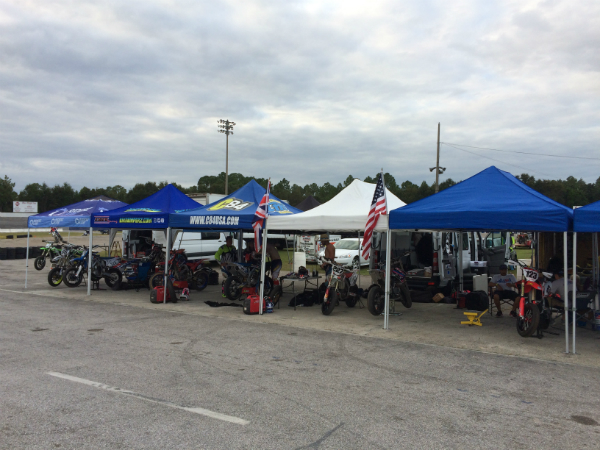 It got closer to the time when practice was supposed to start and the radio stations started using the term “hurricane watch”. They called everyone over to a riders meeting and broke the news to us that we weren’t going to be able to race. They couldn’t run the race on Friday because those who had planned on arriving on Saturday wouldn’t have a chance to race, they couldn’t push the race back because it wouldn’t have made any difference, and they couldn’t risk running the race on Saturday with a hurricane heading our way. About the time they made the call the radio stations began to inform listeners that the area was on “hurricane warning”. We were allowed to practice but I didn’t bother. I didn’t see the point if we weren’t going to race. So we packed up, everyone went out for some barbecue, we said our goodbyes, and we headed home. Evacuations were starting by the time we left.

It was an unfortunate end to the AMA Supermoto season. But, what do you do? I ended up 10th in the nation in a stacked season for AMA Supermoto and that’s pretty good considering everything that has gone wrong for me this year. I got lucky that my broken leg happened right before our mid season break so I had time to heal. And my persistence lead me to consistent points finishes throughout the year.
I’d like to thank AMA Supermoto and DRT Racing for putting on a great series for us. It was unfortunate that so many of the rounds were affected by bad weather. But, what can you do? I would also like to give special thanks to RiderzLaw, Honda Kawasaki Ktm of Modesto, Siskiyou Medical Supply, Dysturbed Ryders, and Toxic Moto Racing for making it all possible.