I’ve been wanting to do this race for years now. M1gp is a mini bike endurance racing series and they put on a 24 hour race once a year that draws teams from around the world. 24 hours of world class mini bike racing! Sign me up.

The last two years it’s conflicted with other races. I finally got my chance this year when Gene Wright with American Honda hit me up to race on the Tough TeeTee endurance team headed by James Bush of Moto Gymkhana. I checked my schedule and this time there were no conflicts. 3 other riders were on the roster including Ed Sorbo and Scott Holden. Tough TeeTee is named for the tough Yamaha tt-r 125 that they used to win their class last year. So it should be a pretty strong team.
A lot has gone wrong for me in racing and in life this year and it’s left me a bit frustrated. The thing that excited me the most about the 24 this year was the grueling nature of a 24 hour endurance race. I wanted it to feel like a run where you just hate yourself. I was looking forward to pouring all of my frustration into it and feeling physically and emotionally exhausted at the end.
The race was held on Willow Springs Kart Track. I got there early, even though an hour and a half into my trip I had to turn around because I had forgotten my leathers. D’oh! A few other teams were already testing but my team wasn’t planning on arriving until later. I had plenty of time to relax, hang out, and check out the track. Gene arrived in the evening, just in time for some pre race festivities. There was a live band and plenty of food and drink for those who wanted it. The band played on into the night while teams practiced and staff experimented with the lighting.

I had my suspicions that the team may not be up to my standards of professionalism but I didn’t start to worry until race day. The race starts at noon and ends at noon the next day and our bike didn’t even get there until about 9 in the morning. Just in time to get a little bit of practice in before the start of the race. But the bike was in the exact same condition it was after winning the race last year. Dirty chain, worn tires, and all. And where were our other riders? Ed Sorbo apparently got the job offer of a lifetime and had to cancel and the other two were late. They had to arrive in time for the rider’s meeting or they wouldn’t be allowed to compete. Scott showed up right as the riders meeting was starting. The other guy showed up late and begged the promoters to let him ride but they stood by their rules. I figured he would at least crew for us. It’s the least he could do if he couldn’t ride. After all, the other teams had no less than six riders and two crew members. He chose not to stay though, so it was just the four of us. James is an awesome dude and I hate to say this about his team, but my confidence was pretty low at this point. We were four dudes on a crappy bike. We didn’t even have new tires. Are you kidding me? I would have bought some mini bike tires if I would have known. Too late now.
James picked me to start the race. It was a Le Mans start, which means the riders run to their bikes and then get on and go. I had to sprint with my ankles that weren’t really up to it. The grids were picked at random and we were next to last. The team that was second overall last year was next to us, in last. I knew which teams I would be racing with and honestly I had planned to take them out if I got the chance. I figured there was a pretty slim chance of anyone getting hurt on minibikes. Then again, Jim Williams had broken his collarbone on a Grom like a week before this event.
I got off to an okay start. Time to get to work. Dave Moss was ahead of me into the first turn but he backed off when I jammed in underneath him. With my elbows up I cut through the field like an ax murderer. I made my way up to second place by the end of the first lap. Purely through aggression because our pace wasn’t that good. Once the race got going and everyone began to fall into their groove we started getting passed. My first stint was an hour and there was a drum line playing the whole time. When I got off I felt like I could do more. I was made for endurance racing. 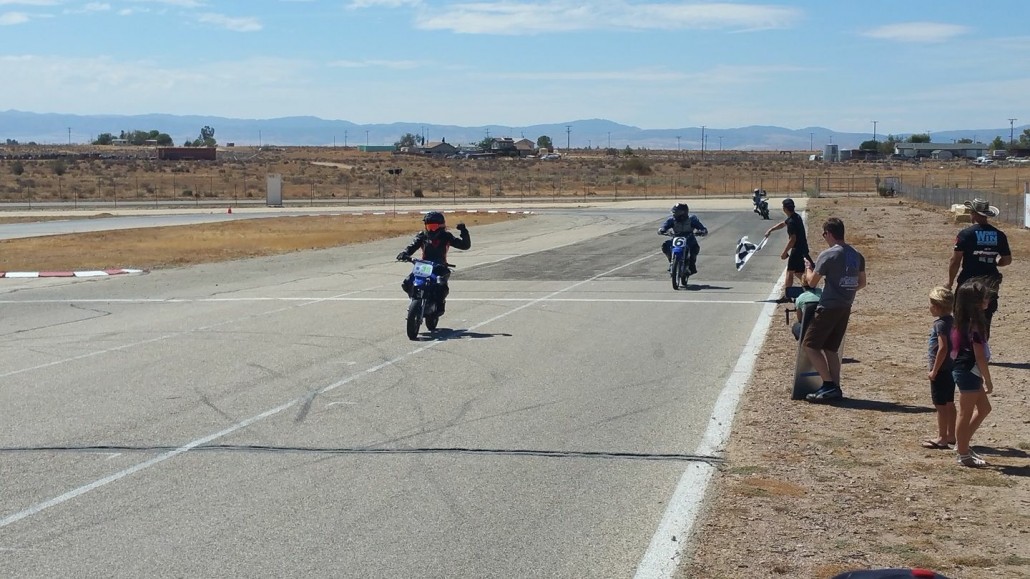 The others did a good job while I prepared for my next stint. I went out for two hours this time, and about an hour and a half worth of that was spent battling with the other team on a tt-r. I can’t stress enough how long this went on. I was riding for two hours to begin with, and the longest battle I’ve ever been in before this was about 6 laps. We were battling back and forth but somehow we were still putting in some of our fastest laps. And I don’t mean politely passing each other. Oh no, we were bumping and trying to shove each other off the track and still somehow riding fast.
It actually rained in the middle of the night. They red flagged the race when it began and because of my wet racing experience I volunteered to go ride in it. I’m usually really good in the rain so I thought I was going to be able to put my head down and put some laps on our competition. Remember how I mentioned the tires we were on? I was still just feeling it out, I wasn’t even riding hard yet and I crashed in turn 1. It hurt too. Little lowsides like that usually don’t hurt but this one did for some reason. It took me a minute to get the bike going again but I rolled through tech and went back out.
The track started to dry out and our competition started passing me way too much. I knew I was being too timid but I didn’t see myself getting over it any time soon. I made the call to hand the bike off early. The problem with that is since we didn’t have crew members, we didn’t have any means of communication. So when I went in my team wasn’t ready. I went back out on track and waited for Gene to suit up and signal me to come in. 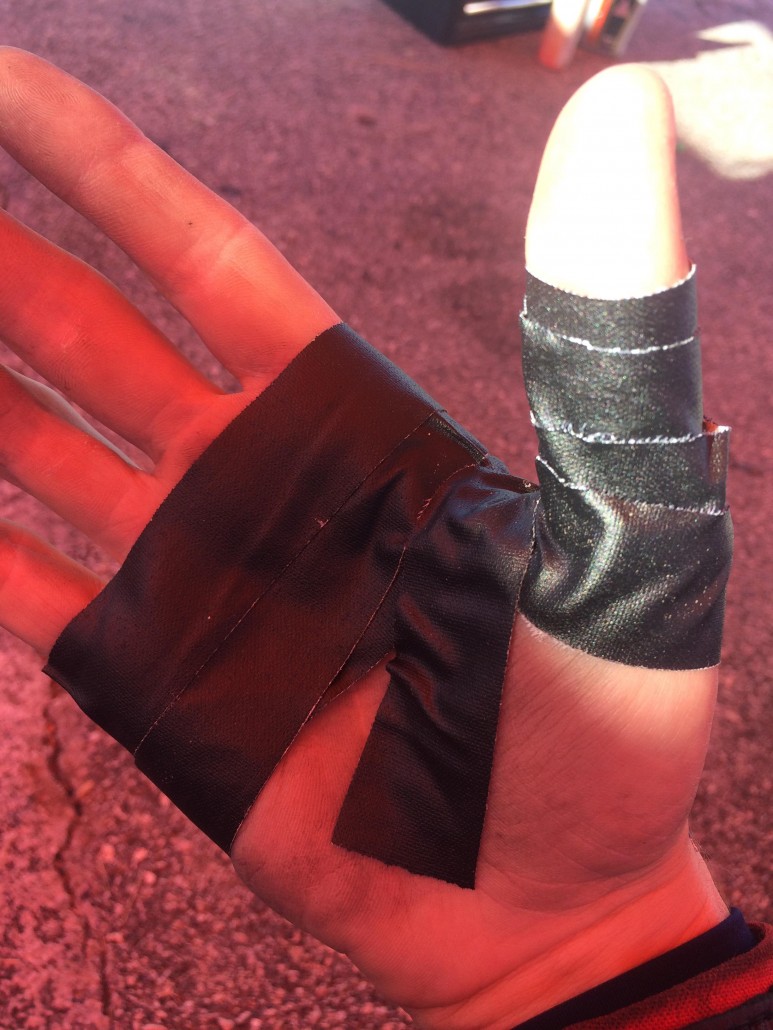 I was so confident before I went out and I ended up losing us so much time. We dropped from 4th to 6th place. It was 11:30 at night, about half way through the race, and I finally found that self loathing feeling I set out for. I reminded myself that this is what I signed up for. But I was worried that I wasn’t going to get my confidence back. I apologized to my team. Gene was the one who selected me for this race and he didn’t seem the least bit worried. He said “Hey, sometimes a football star throws an interception. But the next throw will be a touchdown”. His confidence in me gave me confidence in myself. My next stint was two solid hours of our teams fastest laps of the race. The night shifts were great. I got into such a rhythm that it didn’t even bother me when the lights sometimes went out in different parts of the track.
After that I tried to get some sleep. I got about two hours in before James came and woke me up. Apparently Scott had come in early. James and I were doing two hour sessions. Gene was doing some hour sessions and some hour and a half long ones. Scott was our second fastest rider and he did one two hour session at night and it ruined him. Riding in this race was kindof like doing five pound curls. When you start you can barely feel the weight, but can you keep doing five pound curls for two hours? You probably can, but your arm is going to hurt. The same goes for riding a minibike for two hours. My hands were where I felt fatigue first. I had to tape up my throttle hand and then my butt started getting sore and there wasn’t much to be done about that. 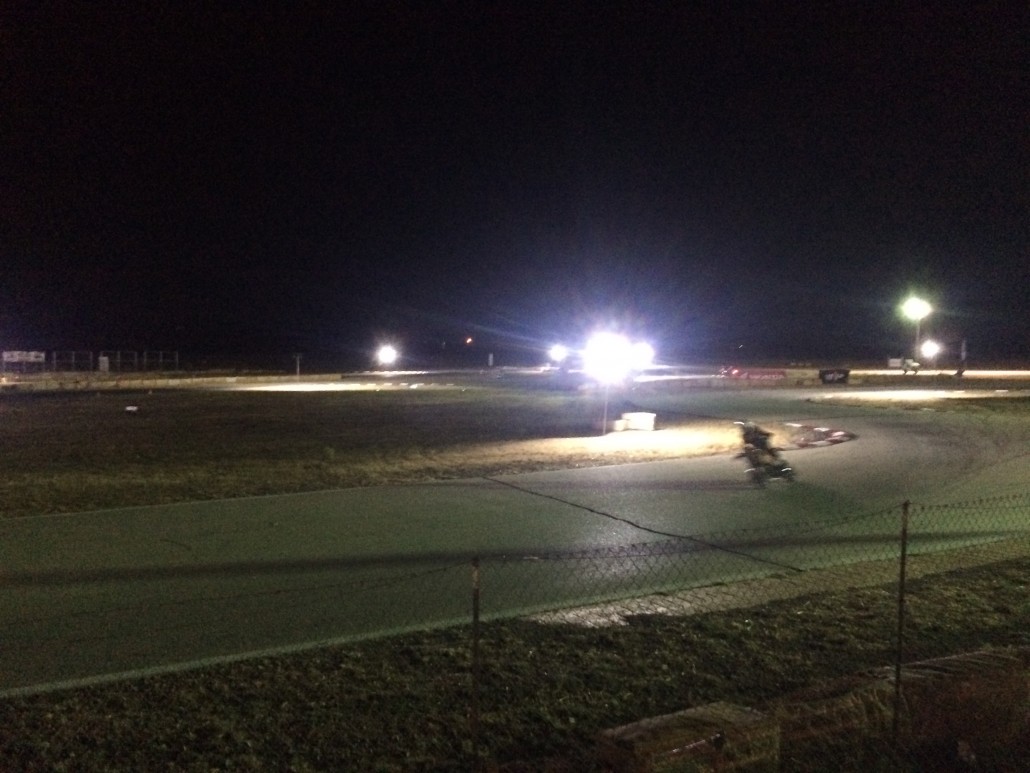 About three quarters of the way through the race it got interesting. We were still battling with the other tt-r team as we had been all throughout the race, but the HustleHard Racing team had some sort of a bike problem which kept them in the pit for quite a while. They were on a much faster bike and were way out of our grasp until now. We were also aware that they had been penalized for rule violations earlier in the race but we could only speculate as to how much. Beating them would not only get us first in class but third overall. A double podium. The other tt-r began to have mechanical problems and they fell behind us.
I put in one last session, this time a little over two hours, and james went out for the last hour. We didn’t know where we stood. At the awards ceremony they saved our class, 125 stock, for last. Everyone became noticeably quiet. They announced the other tt-r team for third place. That was a given. And in second place… HustleHard Racing! I knew what that meant. I lost my mind. It felt so good to win after everything that went wrong for us. The four of us climbed to the top of the podium and I got to pop the champagne bottle, which I’ve never gotten to do before.
Upon closer inspection of the results, we won by one lap. After 24 hours it came down to when the checker was thrown, and we came out on top. The bike may not have run very well but it ran consistently bad for the entire 24 hours. There was nothing left of our front tire. There was a smell during my last stint that I thought was a bike in front of me, but after the race I realized it was our front tire. Seriously. Good riders and good strategy are what won the race for us.
The m1gp24 was everything I hoped for and then some. I never expected to win. I hope I get to do it again next year, especially now that I know what to expect. 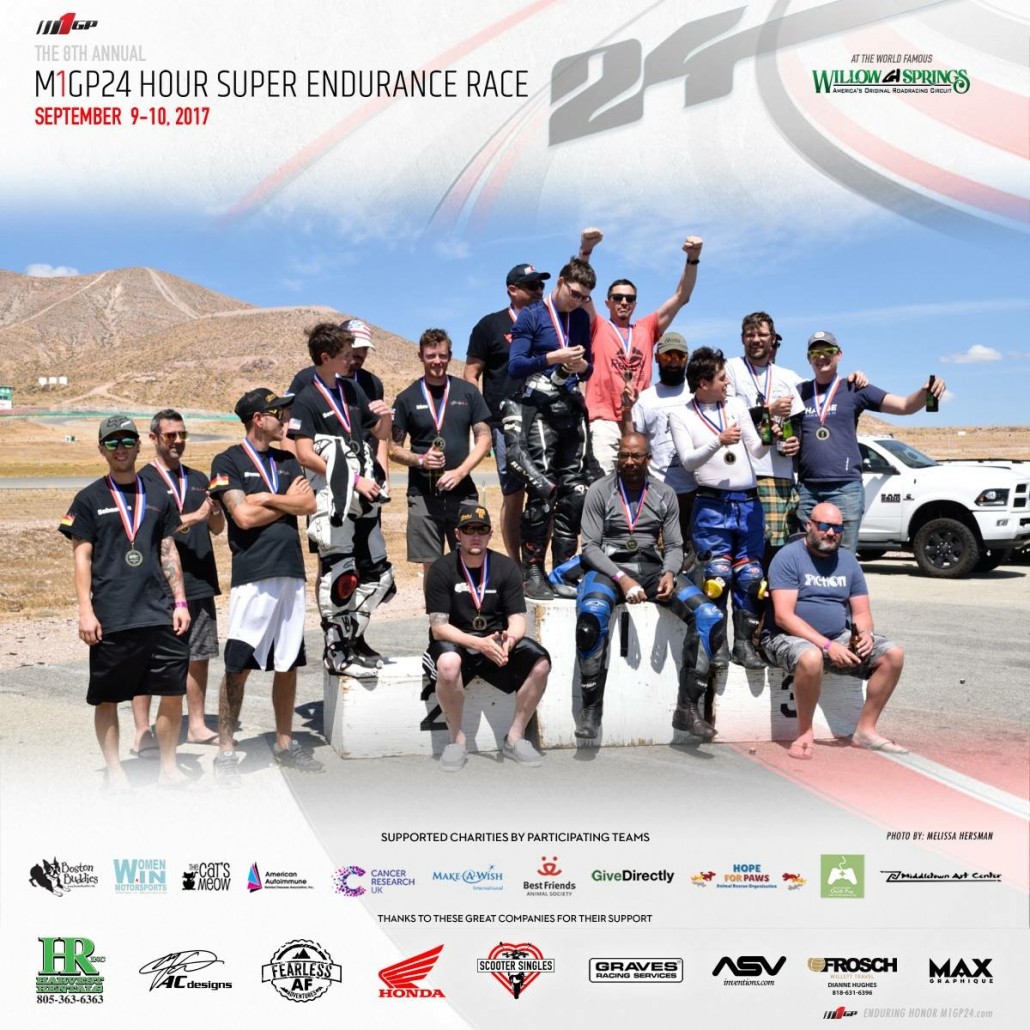