If you’ve been around the riding scene for very long, chances are you’ve heard the term ATGATT (usually pronounced “at-gat”). It stands for All The Gear, All The Time. People who tend to live the ATGATT lifestyle can be a little hard-core about it, and often end up labeled as being “gear-nazis” or other such terms.

Most people who choose to wear ATGATT, have chosen to do so for several reasons. First of all, there is the simple fact that no accident is ever planned – some things may be higher or lower risk, but no one ever “plans” on crashing (and if they do, perhaps they need to rethink their choice in hobbies). Secondly, there is the potential for reducing or eliminating injuries. No amount of gear can protect you from everything, but it certainly CAN cut back on the number of injuries one could potentially sustain. It is proven that fewer injuries increases your chance of survival in the face of a major injury (for example, major internal damage may be survived by someone with minimal other injuries, but may be too much for someone with a lot of road rash and other “preventable” injuries piled on top).

Then there is the comfort factor. Most people who choose not to wear gear do so because they find it “uncomfortable,” but for me, I generally find the opposite to be the case. Getting hit by a bug or rock on your chest at freeway speeds can HURT, and those things hitting your face?!? Ouch! Plus, gear is designed for riding, and is shaped with the rigors of being on a motorcycle in mind.

Some areas of the country are more prone to seeing people in “full gear” than others. Where I started riding, in Wisconsin for example, by wearing an armored textile jacket, some kind of gloves, a full face helmet, jeans, and workboots, I was considered pretty “geared up.” Here in the SF bay area, head to toe leather or textile gear is far more common. Fully geared typically would include an armored jacket, armored pants, over the ankle motorcycle boots, armored gloves, and a full face helmet.

Even people on “slow” bikes and scooters can benefit by wearing gear. Just because your vehicle isn’t capable of high rates of speed doesn’t mean it won’t exceed your skin’s abrasion resistance – which, to be fair, is almost non-existent. Have you ever been running on pavement and tripped? Did you get some minor road rash on your hands or knees  – just from taking a digger off your own two feet? You were moving along at what? 3-6 mph? Even a non-freeway legal scooter can get up to 40-50 mph, and trust me, your cute leggings aren’t going to last very long, even at scooter speeds. This picture was from a scooter crash – at about 10 mph maybe? About 20’ from where the driver had started moving from (crash was caused by a crooked front end on the scooter). 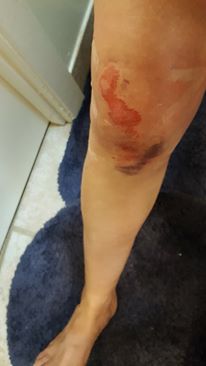 It’s a free country, and you are free to choose to wear what you like within the limits of your state’s laws, but no matter the environment, two-wheeled vehicle, or planned activities, I’d highly recommend riding ATGATT. Your worst regret will be carrying some gear around – which is far less annoying than road rash that lasts for weeks stinging with every movement.