Recently, a good friend of mine had his tricked out Yamaha R6 stolen from his apartment. Immediately, I wanted to know how this happened. My friend’s apartment building comes with secured, underground, gated garage. In order to enter, someone needs to have a remote to trigger the gate to open in the first place. Plus, he lives in a pretty safe part of Hollywood.

As you can see, I clearly had many questions about the logistics of stealing his bike given the circumstances. According to my friend the thieves hot wired his R6 and simply drove it out of the garage. He’s pretty sure it was an inside job, possibly a friend of someone who live in the building. I was thinking maybe someone jammed the garage gate, or they drove out of the entrance way when someone returned to the building.

However, no matter how it went down, my friend is missing one heck of a bike. The part of his tale which tripped me up was he believed his motorcycle was rolled out then driven away. I just kept thinking this wouldn’t have happened if you had a wheel lock. Of course, I didn’t voice this thought because I didn’t want to sound insensitive, the man’s bike had just been stolen.

I pay a monthly fee to park my motorcycle in a public garage across the street from my apartment. Unlike my buddy though, I use a wheel lock, which makes it impossible for anyone to roll my bike away. To be clear, it probably can be hot wired, but the thief won’t be able to drive away with it. The only option a perpetrator would have would be to physically lift my bike and place it on the back of a truck or van. Then, they’d have to most likely use a blow torch, or switch out my wheel, in order to drive my motorcycle. All options are a great deal of work for a thief in a hurry. 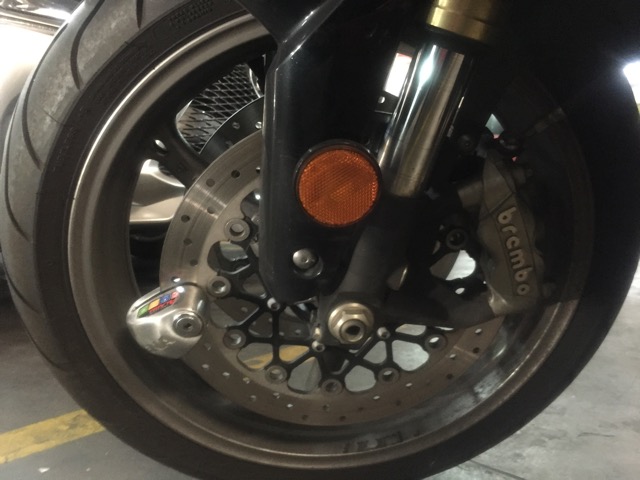 As with most things in life, I harbor a few feelings of skepticism about motorcycle theft prevention. When it comes to this lock, I’m one hundred percent certain your bike can’t be rolled. I once drove out to a location I’d never been before to cover a sporting event, and I used the wheel lock on my bike. When the event ended, it was freezing outside, I was tired and ready to go home. Since I was in a hurry, I forgot to take the lock off my wheel and attempted drive off. I didn’t get far, not even six inches.

Let me tell you, it was scary as all get out getting jerked back on my motorcycle. However, ever since this happened I’ve felt so secure about the wheel lock. I think every motorcyclist should own one. They tend to also be affordable as well ranging from $20-$50.

You can purchase one of these locks on Amazon, Motorcycle Superstore, or from your local motorcycle store. Bottom line, if you don’t have one you should, regardless of where you park.