I don’t know what it is, but for the last two months it seems like US 101 has been blocked off at some point in the late hours of the night. Recently, I’ve been seeing a lot of state troopers slowing down traffic by weaving in between the lanes, or construction taking place with up to three lanes closed at a time. It’s made my commutes home take a lot longer and it’s very frustrating. 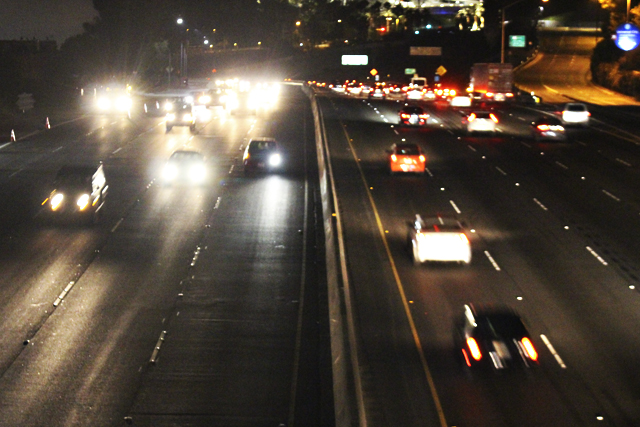 Since I’ve been running into lots of hold ups on the freeways I’ve begun getting off when I notice an obstruction up ahead. It’s been a pain, but it has also forced me to become more familiar with the city I live in. Surprisingly, I’ve found taking back roads and regular neighborhood streets isn’t much of an addition in commute time. At most, I think it’s taken me an extra ten minutes to get home.

I’m a rider who enjoys straight to the point commuting during the week. I hate waiting at traffic lights, and I do not enjoy driving neighborhood streets. I find I have to be even more alert and defensive while driving where there are traffic lights. Most of the danger surrounds intersections, and for whatever reason, the city of Los Angeles doesn’t really have left turn signals at their busier intersections.

However, the intersections which do have these lights, you still see the red light ran by impatient and careless car operators. Even when I’ve managed to escape these danger zones, it seems there’s always a driver trying to get over into my lane without checking their mirrors, blind spots, or even signaling.

Freeways just tend to make me feel a little safer, but when my go to option is taken away, I, too, have to adapt. That’s exactly what I’ve been doing, and I’m quickly learning which streets are safer for motorcyclists. Also which areas of Los Angeles have more aggressive car operators, and I’ve also found some less traveled and smaller streets to utilize.

Although it’s annoying at times, getting off the freeway and becoming acquainted with your city is beneficial in the long run. It’s helped me with my sense of direction, and I’m more aware which major streets lead back to my neighborhood. If the occasion presents itself now, I’m not as flustered getting off the freeway. The long way home isn’t always so bad as long as you arrive safely.