Pacific Track Time managed to land a full weekend at Mazda Raceway Laguna Seca this summer, and it turned out to be a great weekend. If you’ve been a Moto GP or WSBK fan, you’ve probably watched races at Laguna. It is a phenomenal track. The only issue there are sound limits, which are strictly enforced for trackdays.

Since I knew my bike with its aftermarket exhaust would be over the dB limit, I went ahead and ordered a fabricated exhaust insert. While it wasn’t “cheap” I am planning on being at Laguna a bit more next year, and figured it was worth the investment. It did pay off, as I was able to ride the correct lines on the throttle without any issues.

As usual with a PTT day I was assisting with the C group most of the morning and early afternoon. My suspension was needing some adjustments, so that took up a session trying to sort it out. I had been really happy with the bike at Sonoma a week earlier, but these are very different tracks, and I needed to change things up a bit. Unfortunately, I’m still figuring out where I need suspension to be on this bike. I had one A group session on Saturday, but was still fighting setup issues, and was hoping Sunday would be better after we “twiddled some knobs.”

Sunday started out nice and warm, looking to be a bit toasty but a beautiful day at Laguna. In the morning sessions I again helped out with the C group, but after lunch I headed out with A to try to turn some faster laps. The bike was better, but still not great. Despite that, I FINALLY managed to get a faster lap time on this bike than I had on my old bike – which is a first since getting on the ZX10R. Unfortunately I was still 4-5 seconds off where I would have liked to be at this point in time, but I was at least faster than I had been on my (slower) bike.

I made it out for a couple more sessions that afternoon, and overall I was feeling better on the bike. My lines felt decent, and while I still need to learn to use the brakes on this bike, for the first time I was actually getting on the throttle a little bit. My eyes were moving ahead and I even was able to hold it open over turn 1 – which had me catch a tiny bit of air going over it towards the end of the day. Suspension continued to cause problems throughout the weekend, however, so I’m going to work with someone to get things sorted out.

Overall though, it was a fun weekend and I finally got to ride the new bike at my favorite track. Laguna is always memorable, and it’s a fun track that flows well. I enjoy it, and it’s a track I always look forward to riding. 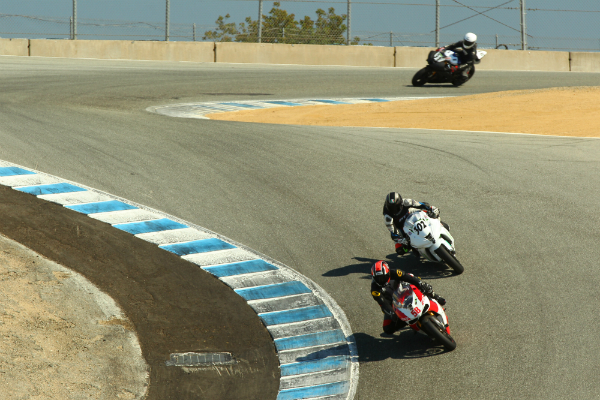