Are all motorcycle crashes avoidable? We would like to believe so, that’s for sure, yet every year, thousands of crashes happen and even here in California the deaths are numerous. Are all of these riders being careless?

Most crashes I’ve seen could have been avoided by the rider – perhaps they weren’t paying enough attention, looking far enough ahead, or were riding too fast for conditions/their skill level. Yet there are a few special incidents where you really have to wonder, other than not being there, what a rider could do to avoid certain crashes.

There are times, when you are doing everything right, yet the stars simply align against you. Don’t get me wrong, EVERY collision can be avoided, but, there are rare instances where 100% of the blame truly belongs to one party. These cases are rare, mind you, and riders are still more likely to have a long and enjoyable riding career if they keep their eyes up, head on a swivel, and always expect drivers to do the silliest things.

Unfortunately, I was the recent award winner for having what I believe was one of those very rare crashes. As usual when commuting, I had my GoPro on and running so I’ve got good video to review, which I have done many times over. Other than not being on the road, I cannot see a way I could have avoided this. I was riding according to where my highest risks were posed, riding a very reasonable pace, and watching far ahead.

This particular incident involved a driver making an illegal U-turn to get to a parking spot on the other side of the street. He passed between a row of stopped cars which completely blocked the view of his vehicle until he was entering the lane (which also means he couldn’t see if anyone was coming). Rather than pausing once he was partially in the lane, he chose to attempt to gun it across.

I was in the wrong place at the wrong time. Timing was against me here. I was just close enough that when he jumped into my lane, even though I went to the brakes and attempted to swerve a bit while keeping the bike as straight as I could manage, there was just no avoiding his vehicle. I knew if I was going to hit him, I was much better off doing so straight on rather than hitting the truck sideways or, worse yet, getting clipped by the corner of his vehicle, so I did all I could to keep my bike as straight as possible while also moving as far to the right as I could in that split second, and scrubbing as much speed as I could without losing the front completely.

At least that part of my plan worked out and I struck his truck at the front fender pretty straight on. This launched me onto and over his hood, landing on the ground and rolling to my feet. I think all the track experience helped a bit as I just went with the flow of the momentum rather than fighting it, and between that and being ATGATT with full head-to-toe gear on, I managed to walk away with relatively minor injuries. My bike, however, was not so lucky, taking the brunt of the impact. Everything in front of the wheel exploded, and there are definitely some issues with the front end in general. Insurance is still pending, but I’ve seen bikes totaled for far less. 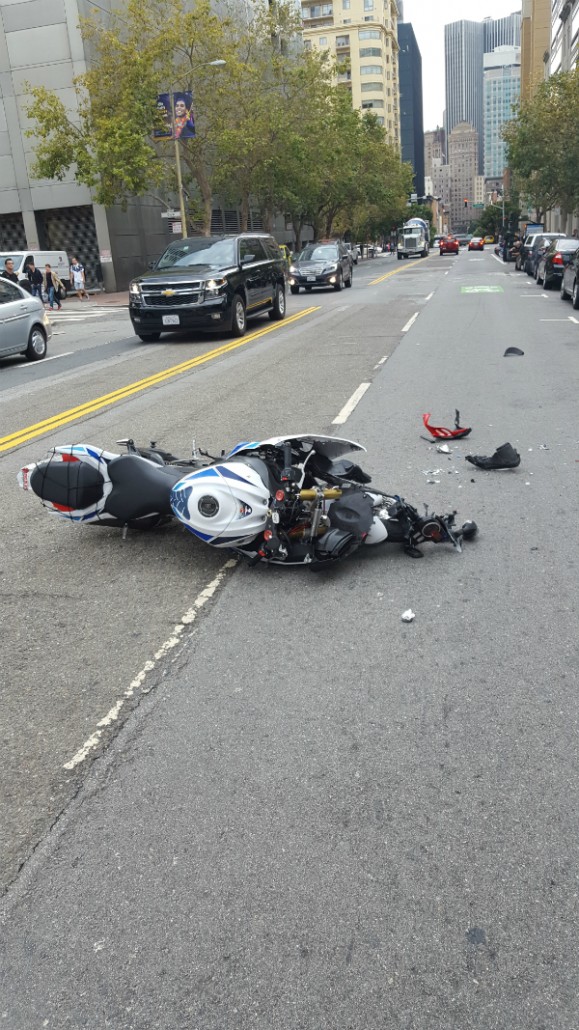 Sad GSXR. What was left of my bike before we tried to pick it up…

I’ve reviewed the video many times, and tried to play scenarios through my head, but even so, if I was in the same situation, with the same knowledge, I would proceed in a similar manner. It was the least dangerous lane position for that particular location, and there were no reasons to expect someone to make a left turn in that area. His vehicle is simply not visible until it’s entering the lane, even above the other cars.

Most collisions involving a motorcycle could be avoided with some extra care taken by the rider, but there are a rare few where there is nothing you could do to predict or prevent it other than not riding – which isn’t really an option, right? 🙂 I will, however, be cutting back on the moto-commuting. I’ve put many, many miles under my belt the past 10 years, but I live close to an easy commute option, and it’s probably time to reduce my risks in this area when I have another, very reasonable, option available.