We’ve all been told at some point in our lives looks aren’t the most important thing. Mostly this pertains to people’s appearances, however today I’m going to apply this saying to motorcycles. I’m even going to go a step further and suggest looks do matter, especially when it comes to your bike.

About a month or two ago, I noticed a new bike parking at the building of my job. This bike is a real eye catcher, and rarely goes unnoticed even by those who don’t own a motorcycle.You might be thinking this bike must be tricked out or adorned in chrome. I assure you, this is not the case here.

This motorcycle looks bad. I’m talking so bad it poses concern in the minds of those who lay eyes on it. To start, the plastics are held together by zip ties. I kid you not, there are so many zip ties on this bike that it looks like stitching. I have no idea how the plastics haven’t come off while riding at high speeds because there’s no way this can be safe.

Additionally, this bike has a substantial amount of rust build up on the exhaust pipe. It’s thick and looks like an uncontrollable growth at this point. Unfortunately, I haven’t seen the rider pull up on the bike yet to hear what the engine actually sounds like.

The entire motorcycle looks like a safety hazard, and I’d never get on this bike. If anything, this is the type of bike I’d expect to see at junk yard. The kind of bike you’d purchase as a project fixer upper. However, I’m pretty sure the owner of this bike isn’t in a rush to improve the quality of this ride as it’s been about two months of no noticeable improvements.

Although this is the worst condition I’ve seen a commuter motorcycle in, it’s not the only crappy bike I’ve seen. I’m not saying you should go out and spends loads of money tricking out your bike. I’m not even saying you need to modify and upgrade parts of your ride to be exceptional. What I am saying is appearance maintenance should be on every rider’s list of things to do. 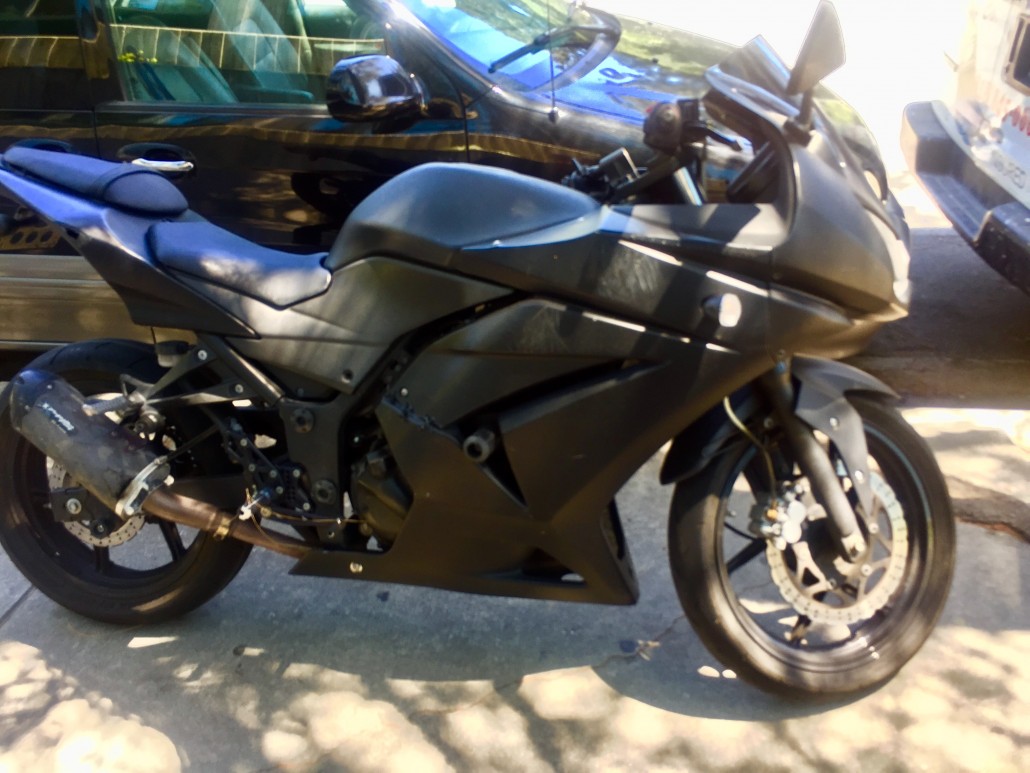 I believe your bike is an extension of you, if nothing else definitely a representation of you. So, I think everyone should make an effort to showcase their bike in the best light possible. It doesn’t matter if you’re driving an older bike, a beginner bike, or a brand new high powered bike, just make sure you take care of it, and it’ll take care of you.