Maverick Viñales brought a halt to his fantasy start to the season by crashing out in the second lap of the US round in Texas, the Movistar Yamaha rider unable to explain the uncharacteristic non-finish. Viñales’ post-race comments indicate that he and the team have tried to come to grips with the incident, even looking at the data right up to the crash but still unable to find the answer. Given that Viñales is also known to break late in a race, usually biding his time until the latter stages of the race to push his pace and make his way to the front, I’m inclined to believe that the crash was more a fluke of circumstance than the Spaniard having overridden his machine prematurely. 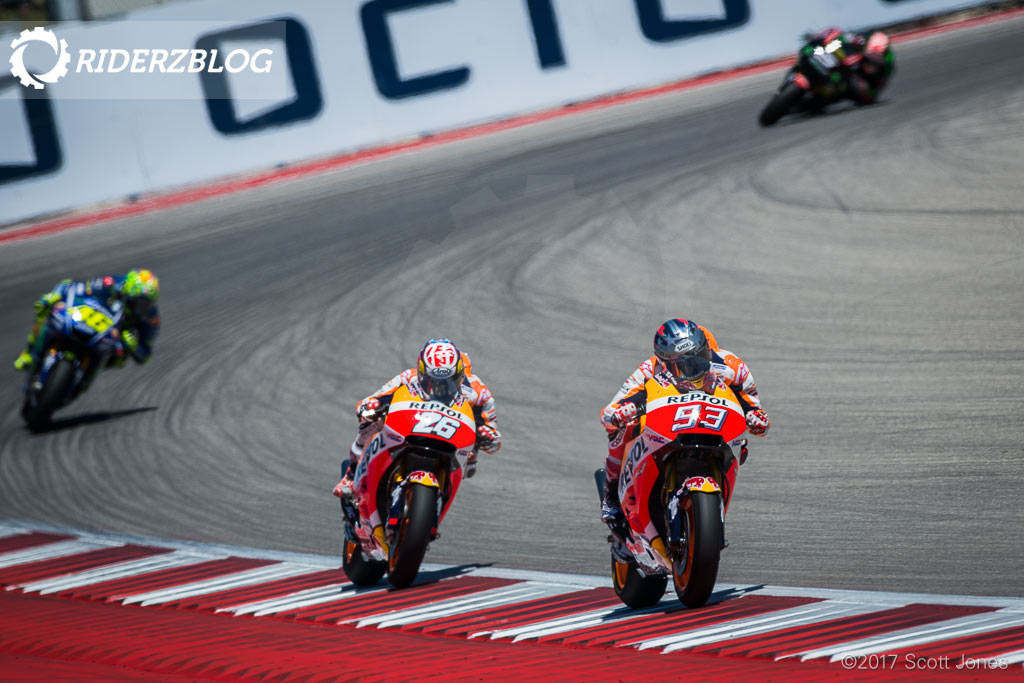 A shame too, as Viñales and Marquez looked set to finally have a proper racing duel as the two effectively traded places in topping the timing sheets throughout the weekend’s sessions right up to the final qualifying session, when both riders were the only ones to dip into the 2:02’s during the weekend. We will have to wait again to see a proper dogfight between both riders, as Viñales may very well have been unable to stop Marquez’ continued reign over the US rounds had he not crashed, as the Repsol Honda rider notches another win in his unbroken record over US Grand Prix’s since joining the premier class in 2013.

Instead it was Marquez’ teammate Dani Pedrosa who would provide the most challenge to him during the race, Pedrosa leading Marquez for nearly all of the first half before taking over the front to take the victory. Both Repsol Honda riders fitted the harder-option rear tire, however differed in their selection of front tires as Marquez opted for the harder-option to Pedrosa’s medium-option, which may have been enough of the difference over the race distance. Still, it was good to see Dani Pedrosa leading a race again, and perhaps as this is the grid’s second year on the Michelin spec-tires since being introduced a year ago, we may be seeing Pedrosa back to the competitive form we know as the year wears on.

Pedrosa would finish third in this race after Valentino Rossi stole the second spot on the podium in the final laps, the Italian’s podium-consistency in the opening rounds of the season now rewarding him with the points lead in the championship from his teammate Maverick Viñales.

I’m trying very hard not to get too excited with Johann Zarco. I’ve been watching MotoGP long enough to know that as the season winds, the disparity between the factory and satellite teams’ performances only get bigger barring climate variables (see: 2016 season). So it’s in the first leg of the seasons when satellite teams and riders get a real chance at taking the fight to the front with their factory rivals.

I know this. It’s practically dogma.

Yet I can’t help but ignore tradition at this point and root for the French Revelation.

It’s almost funny to call Zarco a revelation. He is a two-time and reigning Moto2 world champion after all, and he’s been in the GP circus for nearly a decade now. So while it may be a bit of a disservice to write the following given these established merits, the Frenchman has been an utter surprise in his debut in the premier class.

But therein is where I think the surprise lies. The way Zarco is acclimating not only with the Tech 3 Yamaha M1 but also with the Michelin tires, all while having to race the best of the world in road racing, he makes you forget that he just got here. You forget that you are watching a rookie as he leads races and battles it with the premier veterans. He rides his M1 almost with abandon rather than reluctance, you wouldn’t think he’s still learning the ropes as he backs the competition to them.

And I still think his acclimatization will continue, which is why I think that though the season will yet again highlight the disparity between the satellite and factory campaigns as it progresses, Zarco’s ever-improving comfort in the class will serve to keep the gap to the front more manageable in the latter stages of the championship.

It’s safe to say that I’m now keeping tabs on this French train.