Despite all the anticipation that have built up for the opening round of the 2017 MotoGP season, the race action at Round 1 in Qatar served to set new standards for expectation of how the season will unfold.

From GP rookie Johann Zarco – the current and two-time Moto2 world champion – handily leading the first handful of laps into the race from an excellent qualifying position in the grid, Jorge Lorenzo’s diminished brilliance onboard the new-to-him Ducati GP, to Maverick Viñales’ vault into the upper echelon of the premier class of motorcycle road racing.

Though we are only one round into the championship, 2017 is shaping up to be a season unlike any we have seen before. And with the addition of KTM as an additional factory effort in the class, the MotoGP grid has been its healthiest in the modern era. 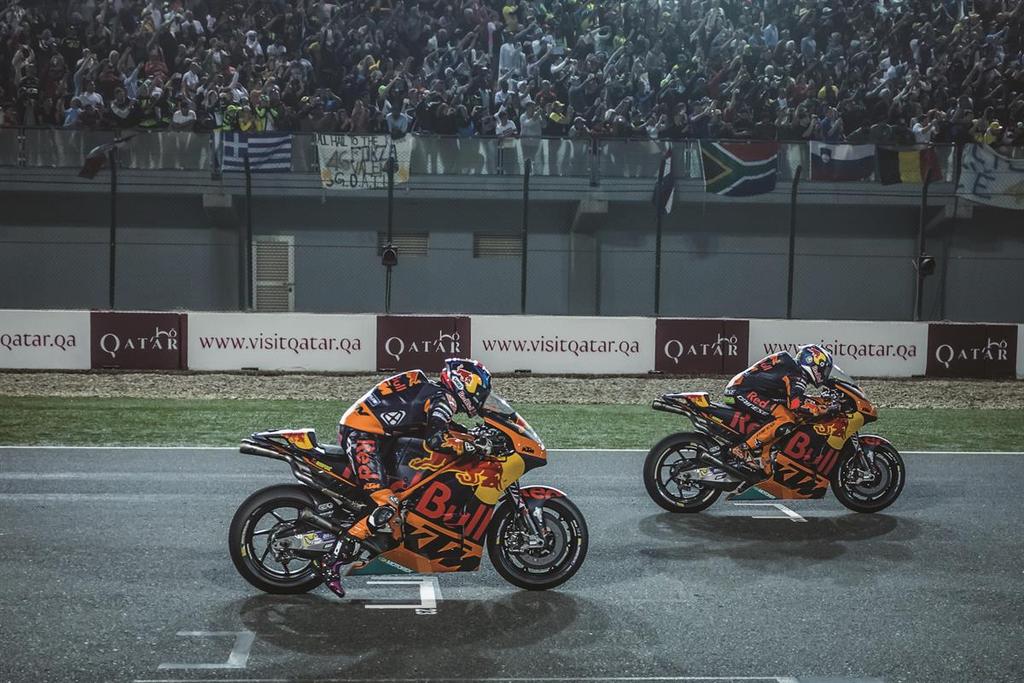 Maverick Viñales’ early days onboard his Movistar Yamaha M1 has been anything but lackluster since trading one blue paint for another from his factory Suzuki GSX-RR machine of the two previous seasons. The young Spaniard has topped the timing sheets during nearly every pre-season and post-season test. His prowess onboard what is arguably the best race machine on the grid has been less of a revelation, but rather a testament to the talent that the young man has steadily exhibited throughout his young career.

He continued his run of dominating form by again leading the timing sheets during this round’s practice sessions, qualifying him on pole as the Qualifying sessions were cancelled due to the weather turning against safe riding conditions. During the race, which saw a delayed start as the weather again looked to rain on the parade, Viñales would drop to fifth place during the first third of the race, he and the rest of the grid still feeling out the track condition due to the light rainfall that delayed the start. But as the race progressed and the young Spaniard got more comfortable for the feel of his machine, he proceeded to move up the order at a steady rate, making it up the front of the race by the fourteenth lap. And while Ducati’s Andrea Dovizioso offered the most valiant of efforts to prevent the inevitable of a Viñales victory, the young Spaniard would not be denied, eventually disposing of the Italian rider by putting up his fastest lap of the race during the final lap, en route to his second premier class victory, his first win from his first attempt onboard his factory Yamaha M1. 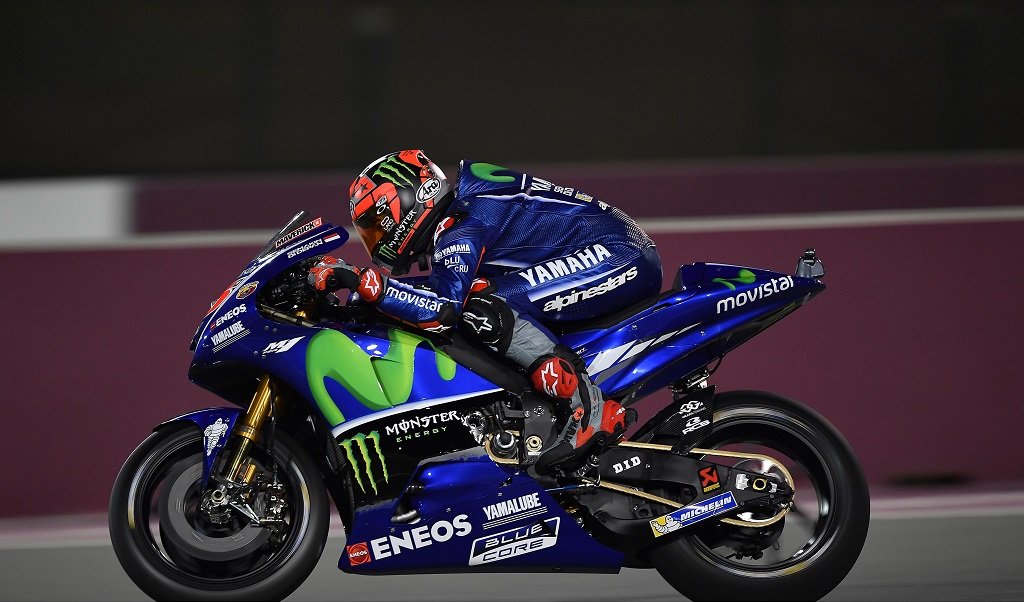 If there was every any doubt over Maverick’s talent before (which was a silly notion to begin with), there should be no doubt remaining at this point.

Maverick has made it.

The Seasons is Still Long

While Viñales was anything but a surprise on the Yamaha M1, the revelation during the first round of the season came from Viñales’ previous teammate at Suzuki, Aleix Espargaro, who is now riding for the Aprilia Racing Team. Espargaro finished an impressive sixth place for the race, which is Aprilia’s highest finishing position since returning to the premier class in 2015. For Espargaro, this bests his previous championship starts in the last two seasons with Suzuki, when he finished 11th in the first rounds of both the 2015 and 2016 season.

While Aprilia has been the slow dog in the pack since their return, made worse by Suzuki’s improving package as both parties made their simultaneous return to MotoGP, it seems the small factory from Noale has found their stride with their RS-GP, and just the rider they need to exploit it.

With seventeen rounds remaining, there is still a lot left to the season for this pairing to become a force to be reckoned with.

It Could Be a Long Season

For three-time MotoGP champion Jorge Lorenzo, the season could drag on if acclimatizing to the Ducati GP machine takes a similar path to his race at the previous round.

Lorenzo qualified on the grid at twelfth by the strength of his practice times for his debut on the factory Ducati, and he would fall as low as sixteenth at the end of the first lap of the race, eventually making his way back forward to finish in eleventh, just one spot ahead of his qualifying. Four steps back to make just one step forward is not the kind of dance the Spaniard will want to have onboard the Ducati GP if they are going to be of any competitive form at all for the rest of the season. 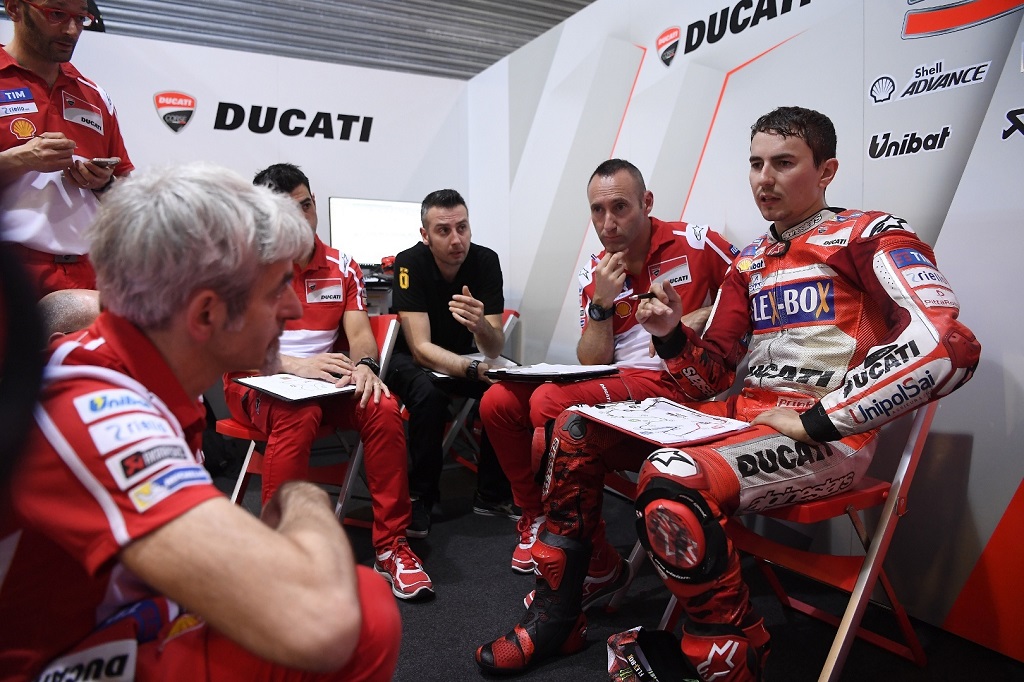 This is a new beginning for Lorenzo, who since joining the premier class in 2008 has only ridden from Yamaha. The Ducati GP is no longer the same machine that even the great Valentino Rossi could not capitalize on, not since Luigi Dall’Igna became the factory squad’s team manager, but it remains a far cry from the Yamaha M1, a bike that was well-suited to Lorenzo’s riding and yielded him three premier titles.

This pairing may have a long road ahead of them to make things work to their favor, and it may take all season to get there.