We all love riding. Motorcycles mean a lot to us, and for many people, it’s far more than just an alternative form of transportation.

Racing has become my passion, and at the end of the 2016 season I was excited for the upcoming year, quickly putting together plans for the 2017 season. As things came together and my new 2017 ZX10R made it into my hands, things were looking good. I planned to try to get the bike track ready as soon a possible and maybe head down to SoCal for some WERA or CVMA rounds and/or trackdays to get some valuable seat time. Additionally, I had plans to start trying my hands at dirt biking as an enhancement to my road riding. 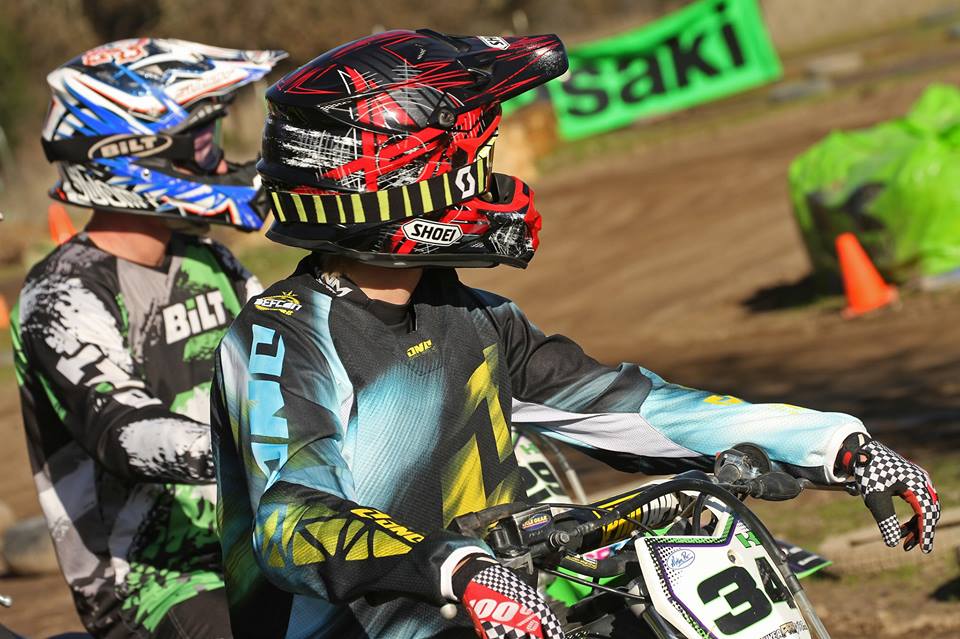 The day after picking up my new bike, I headed up to Kelseyville to attend the Ken Hill Coaching Dirt Days course. I was excited to try my hands at dirt biking with one of the best road racing coaches in the country. As we got going, the fact that I had never ridden a dirt bike was making me rather slow. A few sessions in, however, and Brian Bartlow who’s facilities we were at, said something that made the lightbulb go off. Suddenly, I was going a LOT faster as I finally started to “get” it. This was great, but for one small factor – all morning, I had been the slow girl in the class. The guys were used to easily being able to get around me. This ended up working against me in a very bad way. 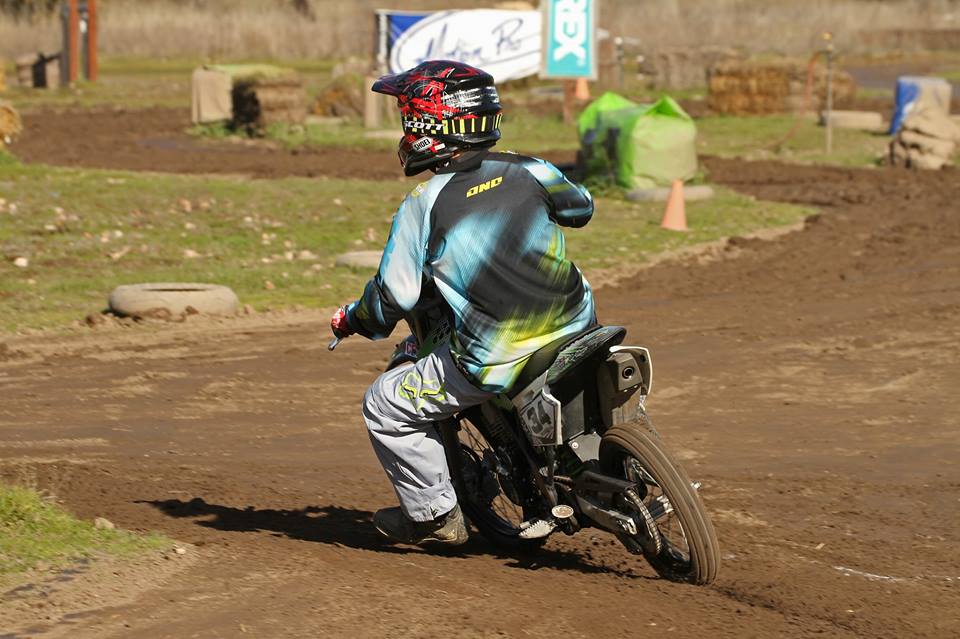 I was coming into the tightest, slowest, and most rutted corner on the track, sliding but holding the bike up and getting ready to make the turn and go. Unfortunately for me, another rider decided to try to pass me on the outside going into the corner. My guess is that he was thinking it would be an easy pass – because earlier in the day, it would have been. Problem was, he wasn’t accounting for reality, and my pace was NOT as slow anymore. As my bike was sliding to the outside, he comes up on my outside and falls into me, hitting me on the outside. We both crash, he pops up and takes off…I try to get up, and instead hear a rather distinct pop in my leg/ankle, to add to the one I had heard while crashing. 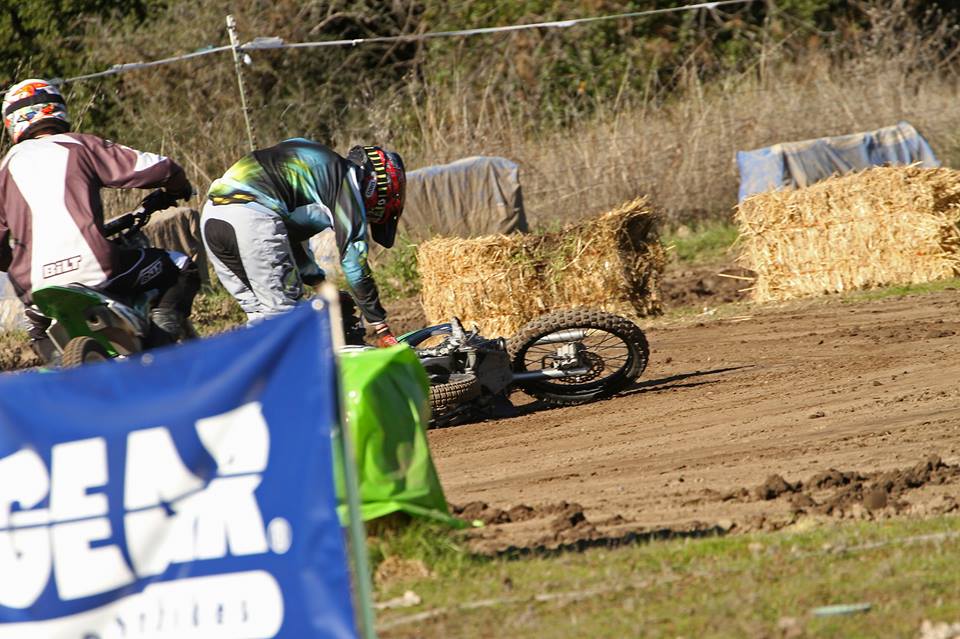 There wasn’t really pain yet, so I tried to take a step – that didn’t go so well. By this point another rider, Moto 2 racer Jayson Uribe had stopped and was helping me. I gave another attempt at seeing if I could limp off with help – nope, something was majorly wrong. I laid down. Bartlow, who is also an EMT, got my boot off and a pillow splint on. Another friend, Joe Salas with 4theriders.com gave me a ride to the ER where xrays showed that I had, indeed, broken my leg. Tibia and fibula both broken. My leg did not look normal, but the ER said I should go home and get with a local orthopedist on Monday, so they splinted it up and sent me back. 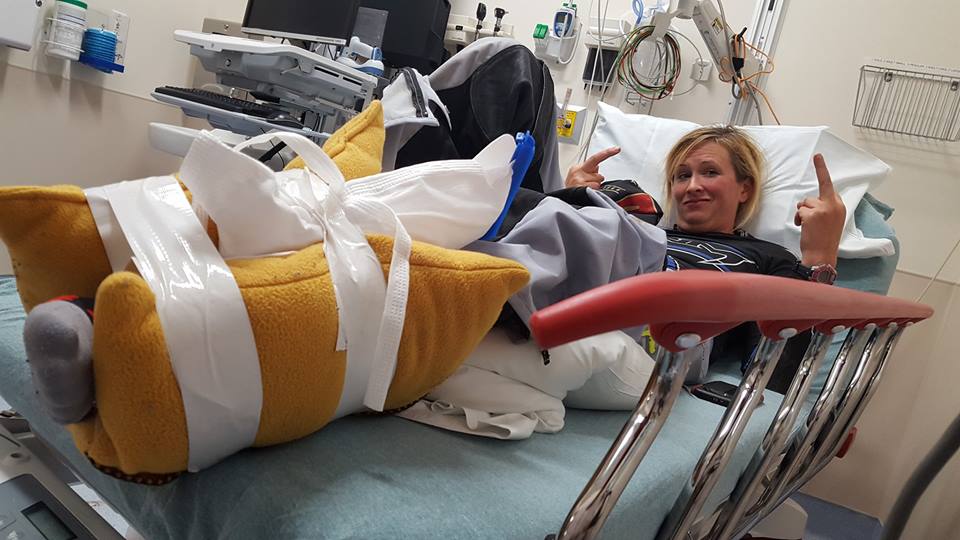 As I later found out, that was not the best course of action.

I spent the rest of the weekend at the camp since at least there were other people there if I really needed them, and I wasn’t sure how I was getting home, since my own truck was a manual. Thankfully Joe was generous enough to let me drive his car to my house while he drove my truck, which at least got me and my stuff all home. 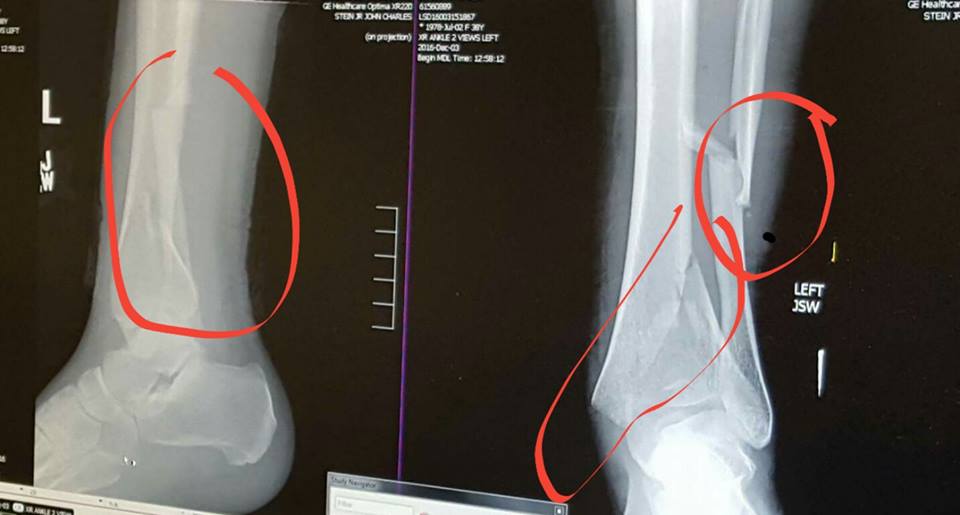 I was to meet with my local orthopedist that Monday….