In some ways, the external fixator wasn’t as bad as I thought it would be. It weighed less than the splint had, and it supported my leg in the proper position when I was trying to sleep (rather than having to try to prop my leg up creatively with pillows and blankets). For all of that, however, it did make me nervous about the chance of falling with it. I had wiped out with the splint on, which was bad enough, but this thing, with those huge pins sticking out (and going directly into my bones) had me terrified of a fall. They stuck out far enough I was sure they would hit despite any efforts on my part.

I still ended up heading in to the office a couple times with that thing on though – on the one hand, I didn’t appreciate doing anything more than I had to, but on the other hand, it was nice to get out of the four walls of my house, too. This type of fixator and pins apparently didn’t need the usual cleaning, so it was pretty low key in that department.

That contraption was on for 2 ½ weeks, during which time a couple of my friends stepped up and helped me out with some stuff around the house and grocery shopping. I was hanging in there, but realizing this wasn’t going to be a quick fix. My second surgery was scheduled for December 30, 2016, which meant any chance at New Year’s plans were out the window. This was a bit of a downer since I had originally been planning a trip to Nevada to spend the new year with some racing friends – but no such luck. Instead, it looked like I’d be sitting at home alone, just like I had over the Christmas holiday the week before.

My second surgery was taking place at the Center for Specialized Surgery, the doctor’s preferred location. After the rough time I had with the first surgery, I was pretty nervous for having another one, especially so close together, but I wanted this leg repaired so I could begin to think about healing! My friend again picked me up and we headed down. The center was small and relaxed, and felt cleaner than the hospital had. I told the anesthesia doctor my concerns after my first surgery, and he seemed to listen, so I was hoping this would be a more normal experience. Eventually we headed off to the OR and once the meds were started my memories fade.

This surgery I felt like I woke up far more like normal – but, oh my goodness, that leg freaking HURT. I don’t just mean a little, either – like I was instantly in tears. Thankfully they were willing to do a nerve block on this one, so once that was completed and started to work it got a lot more tolerable. I was sent into the recovery room, and I was feeling pretty normal fairly quickly. Once everything was looking good they cleared me to leave once my ride arrived. I felt a lot better leaving this surgery than the previous one, as I didn’t feel sick or out of sorts at all. I felt a lot better about heading home this time.

My leg was back in another splint and I’d be wearing that until my follow up in just under 2 weeks. This surgery hurt more, and unfortunately I wasn’t dealing with it as well as I had earlier in the month. Add in that seeing all the holiday posts from my friends about all the fun they were having, while I sat at home, alone, and my mood took a turn for the worse. My positive outlook took a good long hike on New Year’s Day, and as of typing this nearly a month and a half later, has yet to return.

I’m still just as determined to ensure a the best outcome I can, being religious about PT, supplements, elevation, and keeping the rest of me fit, but I’m not too positive anymore. I guess it’s normal when you’re faced with something like this, but I have yet to come across a story of someone else going through this that was single/living alone. The struggle is real! (not even joking….) 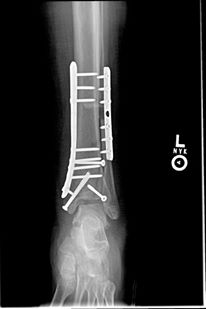 There’s a little bit of hardware in there now.