There’s really no sugar-coating it; the final round of the 2016 MotoGP season at Valencia was a lackluster finale to what has been a historical season of the modern grand prix era. It was a weekend dominated by one rider, and all the racing action was relegated to determining ‘the first loser’. Not exactly what the season needed to bookend itself with.

But it was everything one rider needed to bookend their career. After nine years riding for the factory Yamaha team since joining the premier class, Jorge Lorenzo rode his final laps onboard his Yamaha YZR-M1 at the Valencia GP. And while the Mallorcan failed to finish his Yamaha career with a successful defense of his 2015 title, Lorenzo succeeded in reminding Yamaha, the rest of the grid, and the whole of the viewing world just exactly how synonymous Lorenzo is with the M1.

Lorenzo showed his return to form early on in the race weekend, dominating the first two Free Practice sessions by at least half a second from the next fastest rider. And in just his first flying lap during the second Qualifying session, Lorenzo would proceed to best the previous outright lap record of 1:30.01 around the Valencia Circuit, by clocking in a 1:29.85 before further pushing the goal post with a 1:29.40 to qualifying first for the race. Only Marc Marquez would dip into the 1:29’s to qualify second behind Lorenzo. When the lights went out to start the race, nobody saw which way Lorenzo went as the Spaniard led the 30-lap race from start to finish, pounding out lap after lap of metronomic perfection.

Andrea Iannone’s swan song ride onboard his factory Ducati was the only thing that made the rest of the race laps entertaining, as the Italian battled with his compatriot Valentino Rossi for second place for over half the race distance, Iannone’s factory Ducati embarrassing Rossi’s factory Yamaha each time the pair went around and through the front straight of the circuit. It was clear as day on the last race of the season, that the other manufacturers would have a long winter if they were going to try and make ground on Ducati’s monstrous acceleration. As the Italians battled, Marquez would recover from his terrible start from the line, eventually passing the battling Italians to go from fifth place to second with ten laps remaining, a position the Spaniard never yielded as Iannone would proceed to take third position from Rossi eventually.

‘Let me remind you…’

Lorenzo’s victory at this round was standard Lorenzo-fare. For a season littered with unpredictable race conditions and results, this final round had nothing but perfect racing circumstances. And it’s when circumstances like this turn up that riding perfection can be exhibited by Lorenzo. When the conditions are like this, this is the Lorenzo that we get – fast, peerless, untouchable.

But as standard operating procedures go, this win is anything but for Lorenzo, Yamaha, and ultimately, Ducati. 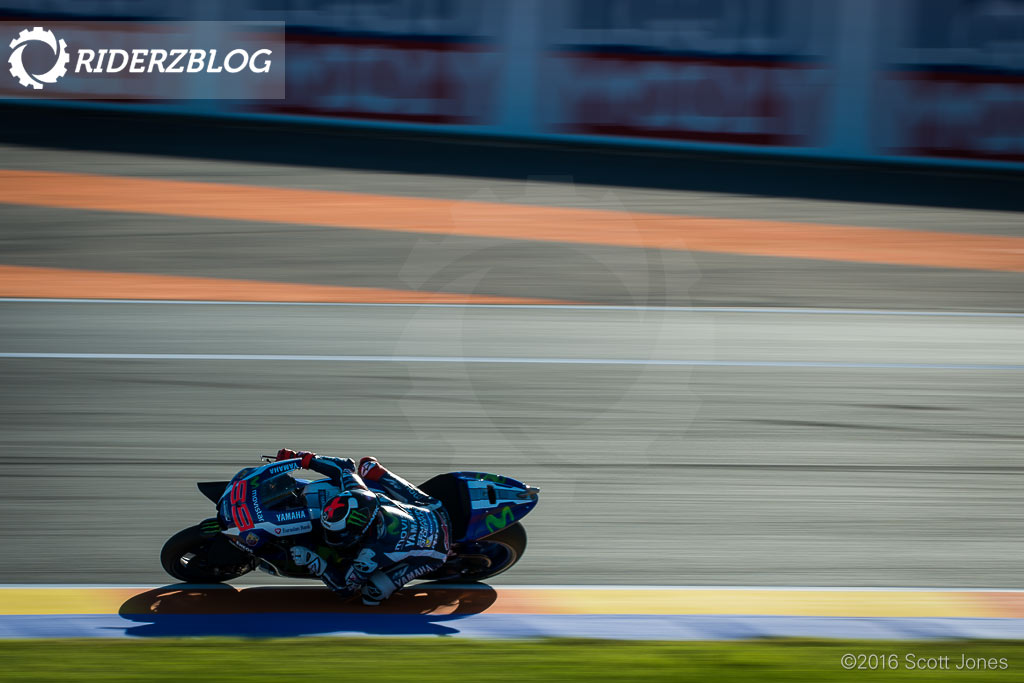 As splendid as the 2016 season has been for grand prix racing, it has been Lorenzo’s worst of his career. Despite finishing third in the championship overall, it is his worst point-scoring season since his rookie year in 2008. This season also showed shades of Lorenzo never before seen, afflicted by a number of things (new tires, lower-spec electronics, weather) that seemed to have struck fear in the three-time world champion’s heart, riding timid like never before and settling for points and positions that were nowhere near favoring his title defense. For a better part of the season it seemed Lorenzo had already checked out, just doing his time and waiting until his new adventure with Ducati can begin for 2017. You could have been forgiven to have written off the Spaniard, as it seemed only reasonable to do round after round after round of lackluster showing from Lorenzo. Suddenly it seemed that Yamaha did right in letting him go, despite having invested and devoted so much to the Mallorcan for nearly the past decade. Suddenly, it seemed that Ducati’s huge financial signing of Lorenzo may be another practice in wasted investment, history possibly repeating itself when the Italian factory went nowhere despite two years of Valentino Rossi riding for them.

But with this win, Lorenzo reminded everyone just exactly the kind of rider he remains. Albeit only at given circumstances, he remains one of the fastest riders in the championship on a good day, and unparalleled on his greater days. He reminded Yamaha that in their era of having him alongside Valentino Rossi, he has trumped the greatest of all time. You could even hear the tremendous sigh of relief from Ducati and suddenly, they remembered why they signed the Mallorcan.

With this win, Lorenzo reminded us to never forget:

‘Even a predator in its worst preying days is still a predator feared.’