Have you watched the races yet? If you haven’t, go watch it. If you have, go watch it again. Either way, I want you to really watch it. I mean really, REALLY watch. I want you to pay attention and note how a ‘champion’ is really made. No, not how Jonathan Rea successfully defended his world championship title, but at how Rea showed he really is a champion in every sense of the word.

I’ll give you a hint: It’s not how he secured his second consecutive title in the first race.

It’s how he lost in the second race. 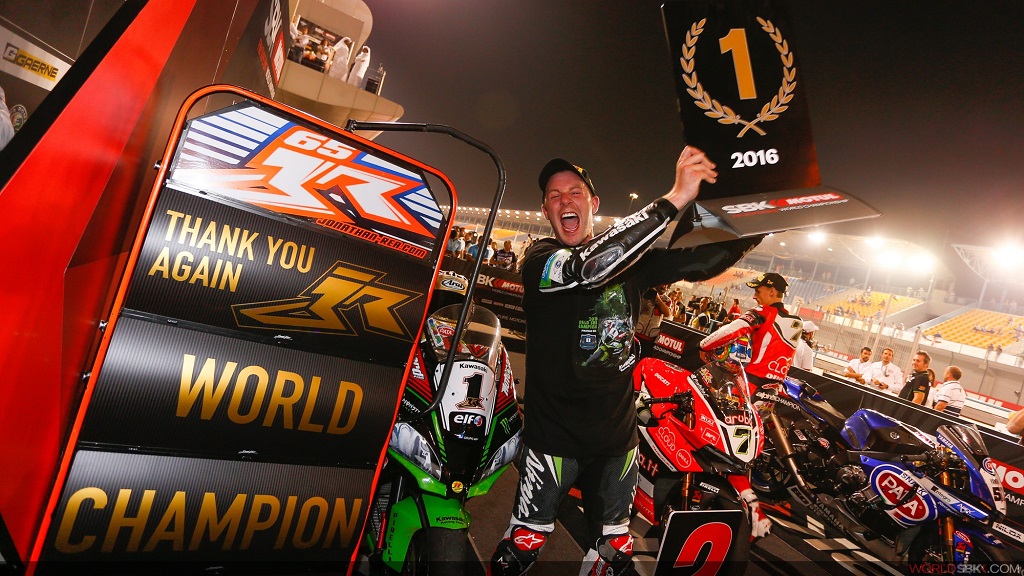 Despite yielding another win to Chaz Davies in the first race, Rea secured the 2016 world title by finishing ahead of his teammate Tom Sykes, The matter of when has been settled as Jonathan Rea successfully defended his title despite a defense campaign marred by issues with his machine a number of times throughout this season. But all’s well that ended well as Rea celebrated his second world title, the first time a superbike rider secured back-to-back titles since Carl Fogarty did back in the 1998 and 1999 seasons.

But Rea wouldn’t relax just yet. With Chaz Davies’ win in the first race of this round, Davies would have one win over Rea throughout the season at ten wins total to Rea’s count of nine. With just the second race at Qatar remaining for the season, Rea was determined to stop Davies’ unbelievable run of form as of late to swing the balance of the competition back to equilibrium as the championship closes out for the season. Rea knew that despite Davies winning five of the last six races in the previous three rounds including two double-wins in the previous two, taking the final race win would stop Davies’ momentum on his Ducati, something that the whole grid knew needed to be done. And with the season’s championship concluded, Rea was very much in the position to mount the challenge to Davies.

How a Champion Rides

When the red lights went out for the second race, Davies and Rea wasted no time battling each other, the two riders trading positions in the lead four times before the first lap was over. Another drag race into the first corner would see Davies ahead of Rea, but Rea would overcook the corner, running wide and off the track. Rea would rejoin the race but in thirteenth place. Rea’s hopes of knocking Davies off his roll looked hopeless until the seventh lap, when another rider suffered a mechanical problem with their machine, which resulted in oil spilled over the circuit. The race would be restarted, and despite having to start in ninth position, Rea would have his second chance at securing his tenth win for the season to match Davies’. 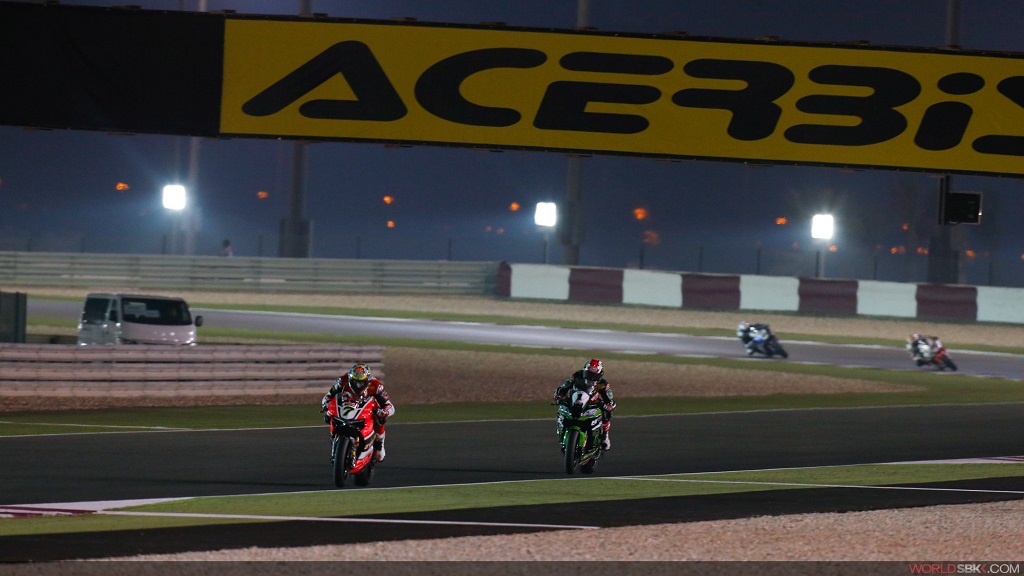 Despite a less than stellar start once the red lights went out for the second time in race two, Rea would find himself in fifth position at the end of the first lap just over a second behind Chaz Davies in the lead. Tom Sykes would occupy second place behind Davies, as both riders were still in contention for second in the championship. As Davies would once again gap the rest of the field in the front, a second place finish for Sykes would secure second in the world championship for him. But nothing was guaranteed, as Rea would continue his charge to Davies in front, the world champion needing just four laps to take second position from his teammate Sykes. Rea was still over a second back from Davies on the fifth lap after relegating Sykes into third, but the world champion would continue to cut to Davies’ lead, riding as ragged and aggressive as he needed to make the ground up on the Ducati rider. With two laps remaining Davies only had just over a quarter of a second lead to Rea, and it was at this point that Rea showed what it meant to be a champion.

Rea knew that if he could get ahead of Chaz Davies to take the win, he would also help his teammate Sykes secure second in the world championship. But he also knew that if he failed, then the Ducati rider would be the runner-up in the championsip (again) instead of Sykes. Just over a quarter of a second gap to Davies with two laps remaining would be the difference to Rea on whether he and his Kawasaki Racing teammate would finish 1-2 in the championship, or not.

Jonathan Rea would yield his second place finish to his teammate Tom Sykes at the end of the race. How a Champion Gives Back

What can I say? Fantastic gesture by the other side of the garage to do all this. Quite speechless! I really, really appreciate this kind of gesture. I’ll remember it until I’m very old! What can I say, it swings in roundabouts. We’ve lost championships in the past from team orders from other manufacturers, so to have this and gift us second in the championship and ensure a Kawasaki 1-2 with the riders and manufacturers, it’s been a heck of a season for Kawasaki!

During the 2014 season, Tom Sykes was at the cusp of successfully defending his title as the current world superbike champion after securing the title at the end of the 2013 season. He would lose the title to Frenchman Sylvain Guintoli during the final two rounds of that season, more or less due to team orders. Sykes was 31 points ahead of Guintoli in the championship going into the final two rounds, but Guintoli would win three of the last four races. One of those three wins was gifted to Guintoli, as his then Aprilia teammate Marco Melandri had to yield his race winning position in the first race of the Magny Cours round due to team orders. At the first race in the following round in Qatar, it would be Sykes’ own teammate in Kawasaki that would do damage to his championship campaign, as Loris Baz ignored their team’s order to yield his second-place position in the race to Sykes, who was running in third. Baz’ refusal would be a disservice to Sykes and their team, and only served his fellow Frenchman Guintoli who would defeat Sykes in the championshp by just six points.

Baz departed the superbike grid as he left for MotoGP. In his place, Kawasaki hired Jonathan Rea.

Rea would remember recent history, and though he would prove to be more successful than Sykes on the ZX10R since his arrival, Rea would remember what Kawasaki has done for him. After six years without a championship to his name riding a Honda superbike, Rea would blitz the championship on his first year with Kawasaki, taking nearly as many wins in his first season on the Kawasaki as he did in six years on the Honda, en route to his first world superbike championship. And while the inter-team competition between him and his Sykes is very much real, Rea recognizes that it had been Sykes that single-handedly developed the Kawasaki ZX10R into the multiple-championship caliber machine that it is today. 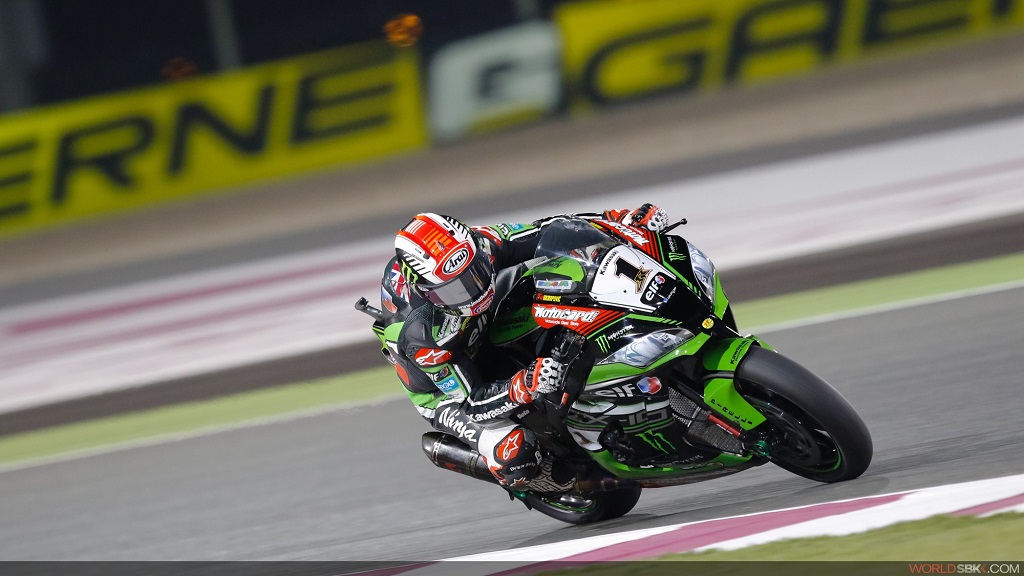 Every champion knows what it takes to be where they are, that racing is every bit a team effort that encompasses just one side of the garage. And so with a simple gesture of ‘gifting’ Sykes with second place in this year’s championship, I dare say that Rea’s gesture is a more magnificent token of gratitude to Kawasaki Racing Team, and Tom Sykes, than winning the final race of the season.

Jonathan Rea is a champion in the truest sense of the word.